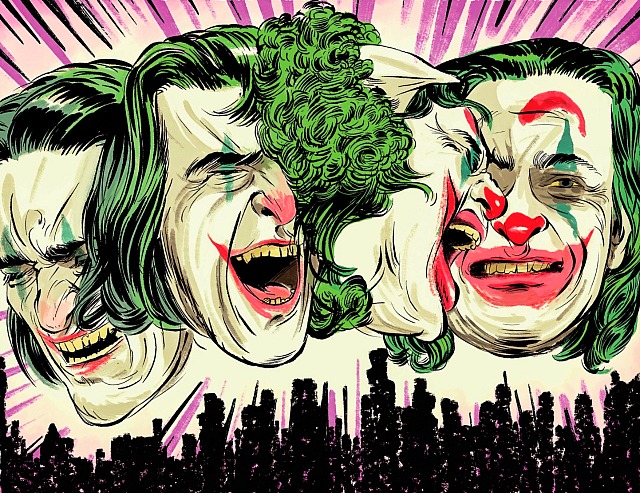 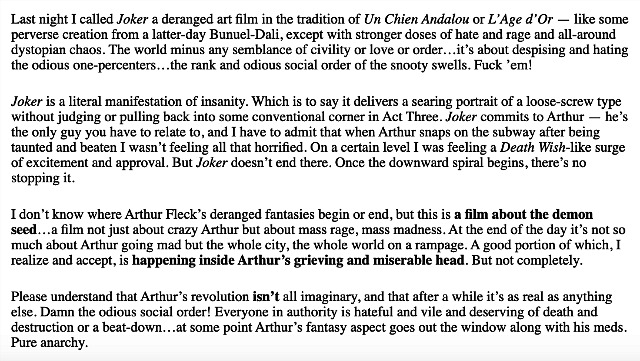 I don’t eat candy in movie theatres as a rule. I’m strictly a warm-buttered-popcorn-and-coke kind of guy. But if I was forced to eat some kind of candy or else, I would choose Jujyfruits, which is the hottest candy in Pennsylvania right now. Followed by Hot Tamales, Good & Plenty, orange slices and thick red licorice. But I really try and stay away from that shit. Anyone who likes Tootsie Rolls in this day and age has something wrong with them. Ditto Necco Wafers. And to hell with Slurpies — they give me a headache. 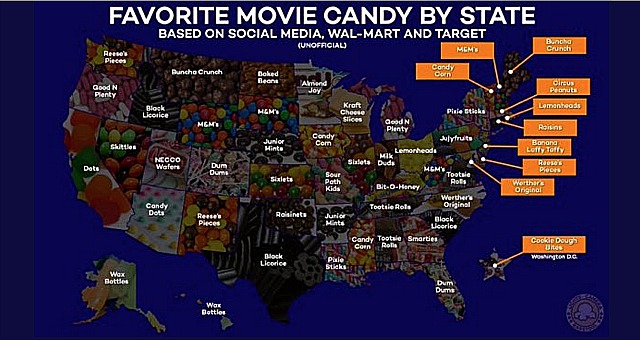 There’s no question that Roman Polanski‘s An Officer and a Spy, a drama about the infamous Dreyfus case, is a strong, worthwhile film. It won the Silver Lion at last month’s Venice Film Festival. But of course it can’t be theatrically distributed or streamed in the U.S because of Polanski has been cancelled over his late ’70s statutory rape case, as well as a couple of other unsavory allegations left over from the ’70s and ’80s.

HE to distribution pally: How might I some day see An Officer and a Spy (aka J’Accuse) in this country? I realize that the odds are against theatrical distribution because of the wokester #MeToo political climate, but surely someone has the bravery to distribute this film, at the very least on a streaming basis.

A distributor pally suggested that I reach out to the worldwide sales agent, Playtime, and in particular Francois Yon, a Playtime Group partner who presides over Sales & Business Development.

I did so right away, and an hour or two later Francois responded as follows: “Thank you Jeffrey. Maybe you should write about this situation and how the American audiences are being culturally cut out from the rest of the world. It did happen a few times in past American history, so I remain hopeful that [things] will change once the Trump years are behind us.”

HE to Francois: “You’re saying I might have to wait until Trump is out of office before seeing An Officer and a Spy? Seriously? Will there be some way for me to at least stream it from a European company? Can you offer me a private link? I’d really like to see this as I went to Telluride instead of Venice.”

Dear Boys and Girls: Woke Twitter is apparently committed to smearing, belittling and otherwise taking down Todd Phillips‘ Joker (Warner Bros., 10.4). The reaction to Phillips’ quotes in a new Vanity Fair interview, in which he said that SJW Twitter jackals are killing (or have killed) irreverent humor, made that clear. It is axiomatic that if Woke Twitter is trying to denigrate something or someone, the victim of this attack almost certainly has something worth pondering and considering. So this is one more reason to flock to Joker this weekend. 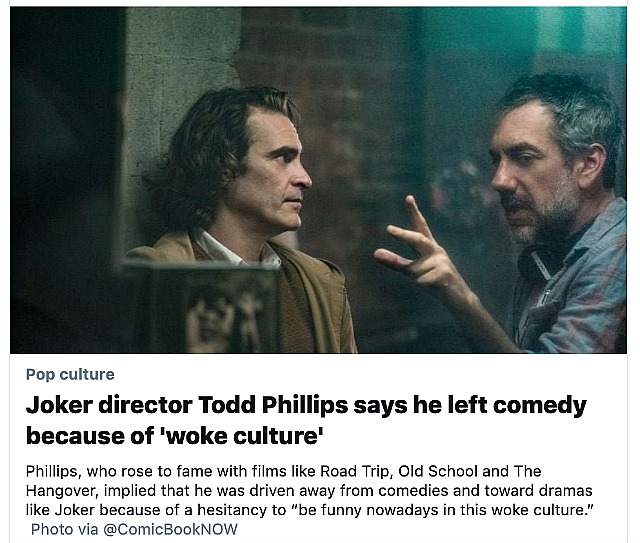 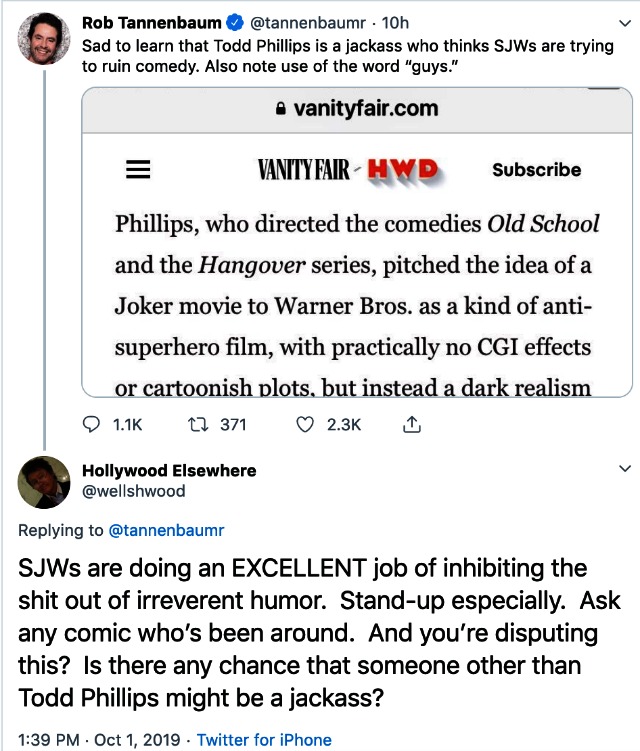 From “Shoot Them in the Legs, Trump Suggested: Inside His Border War,” a 10.1 N.Y. Times story by Michael D. Shear and Julie Hirschfeld Davis: 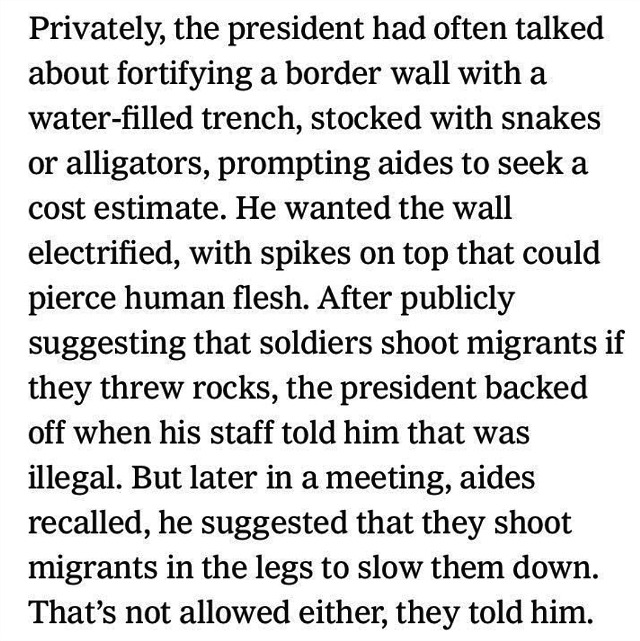 Wiki boilerplate: “Birds of Prey (and the Fantabulous Emancipation of One Harley Quinn) is 2.7.20 Warner Bros. release, based on the DC Comics team Birds of Prey. The film is intended to be the eighth film in the DC Extended Universe (DCEU) and is directed by Cathy Yan from a screenplay by Christina Hodson. The ensemble cast includes Margot Robbie, Mary Elizabeth Winstead, Jurnee Smollett-Bell, Rosie Perez, Chris Messina, Ella Jay Basco, Ali Wong and Ewan McGregor.

“Birds of Prey follows Harley Quinn as she joins forces with Black Canary, the Huntress, and Renee Montoya to save Cassandra Cain from Gotham City crime lord Black Mask.”

“Six billionaires fake their own deaths and form an elite vigilante squad in order to take down notorious criminals”…bullshit. The Michael Bay stamp is just as toxic as ever — the high-velocity action aesthetic taken to absurd, over-funded, over-amplified heights. Ryan Reynolds needs to keep rolling and knocking, of course, but how does starring in a film like this not lower his basic stock rating? Shot in Italy (Rome, Florence, Siena, Taranto), the UAE (Abu Dhabi, Al Ain) and Hong Kong. I haven’t seen it, but the trailer suggests pure wankery.

Nick Clement (aka “Action Man”): “They’re putting this out DECEMBER 13th!! The insanity of a mega-budget Scorsese and mega-budget Bay coming from the same studio and separated by one month is unprecedented. It looks completely insane/stupid/retarded/amazing. PHOTO-REAL ACTION THAT ACTUALLY LOOKS NEW AND INSPIRED. And the full-deal F-bomb route, like the old days. Because it’s Netflix. And they don’t give a fuck. They gave Bay unlimited freedom to be Bay — can’t wait!!!!”

I’ve watched this day-old video 15 or 20 times now. Why hasn’t the fast-acting hero’s name been reported? This is the kind of thing that John McLane would’ve done if he’d been an airport service guy instead of a flinty renegade cop.