All mainstream Hollywood sex comedies of the early to mid ’60s are pretty close to unwatchable now. A year or two ago I was close to condemning Lover Come Back as the most painfully unfunny, but they’re all horrendous to sit through. All that sexual interest, energy and intrigue, and all of it suffocated and shackled. So many U.S. comedies about characters wanting to get randy, and all of them constrained because of the industry’s still-prevailing production code, which didn’t begin to erode until ’66 or thereabouts.

“Is this an aviation film directed by Howard Hawks or what? Yes, much of it takes place after dark but this is also a film with a certain merriment and esprit de service and drinks and songs on the piano. Why so inky?

“I lost patience after a while and turned the brightness all the way up, and it was still too dark. I much prefer the high-def Vudu version that I own; ditto the TCM Bluray that I bought a year or two ago. Mark this down as a case of Criterion vandalism — it’s just not the film I’ve been watching all these years.” — from HE pan of Criterion’s Only Angels Have Wings Bluray (“Dark Angels, Black Barranca, Noir All Over“), posted on 4.19.16.

The realm of Only Angels Have Wings is all-male, all the time. Feelings run quite strong (the pilots who are “good enough” love each other like brothers) but nobody lays their emotional cards on the table face-up. Particularly Cary Grant‘s Geoff, a brusque, hard-headed type who never has a match on him. He gradually falls in love with Jean Arthur but refuses to say so or even show it very much. But he does subtly reveal his feelings at the end with the help of a two-headed coin.

It’s not what any woman or poet would call a profound declaration of love, but it’s as close to profound as it’s going to get in this 1939 Howard Hawks film. If Angels were remade today with Jennifer Lawrence in the Arthur role she’d probably say “to hell with it” and catch the boat, but in ’39 the coin was enough. Easily one of the greatest finales in Hollywood history.

Leonardo DiCaprio turns 45 tomorrow. He’ll be 50 before you know it because time flies when you can’t get enough of the treadmill. I chatted with Leo a few days ago at a San Vicente Bungalows after-party, and between the lines I was thinking “wow, the train is moving faster and faster.”

DiCaprio has been a power-hitter and marquee headliner for 22 years now, or since Titanic. 26 years if you count The Boy’s Life. Nobody can ever diminish or take away the killer performances he’s given in Once Upon A Time in Hollywood, The Departed, Inception, Revolutionary Road and especially The Wolf of Wall Street…a lot to be proud of. And I can’t wait for what happens with Killers of the Flower Moon.

But when I think of vintage DiCaprio I rewind back to that dynamic six-year period in the ’90s (’93 to ’98) when he was all about becoming and jumping off higher and higher cliffs — aflame, intense and panther-like in every performance he gave. I was reminded of this electric period this morning that I watched the below YouTube clip of DiCaprio and David Letterman in April ’95, when he was 20 and promoting The Basketball Diaries.

I respected Leo’s performance in This Boy’s Life but I didn’t love it, and I felt the same kind of admiring distance with Arnie, his mentally handicpped younger brother role in What’s Eating Gilbert Grape, partly because he was kind of a whiny, nasally-voiced kid in both and…you know, good work but later. Excellent actor, didn’t care for the feisty-kid vibes.

But a few months before Gilbert Grape opened I met DiCaprio for a Movieline interview at The Grill in Beverly Hills, and by that time he was taller and rail-thin and just shy of 20. I was sitting in that booth and listening to him free-associate with that irreverent, lightning-quick mind, and saying to myself, “This guy’s got it…I can feel the current.”

Then came a torrent: a crazy gunslinger in Sam Raimi‘s The Quick and the Dead (’95), as the delicate Paul Verlaine in Total Eclipse (’95), as himself in the semi-improvised, black-and-white homey film that only me and a few others saw called Don’s Plum (’95), as the druggy Jim Carroll in The Basketball Diaries (’95), as a wild, angry kid in Jerry Zak’s Marvin’s Room, opposite Claire Danes in Baz Luhrmann‘s Romeo + Juliet, as Jack Dawson in Titanic and finally as a parody of himself in Woody’s Celebrity. Eight performances, and every one a kind of sparkler-firecracker thing.

Two or three weeks ago I began hearing about certain levels of Marriage Story discomfort among older couples. Even about walk-outs, believe it or not. Which is crazy because (a) Marriage Story is obviously a first-rate, grade-A film about real-life angst and mistakes and hurdles, and with excellent performances up and down from Adam Driver, Scarjo, Laura Dern, Ray Liotta and Alan Alda, and (b) all good films serve truth-and-honesty sauce, and in so doing provide nourishment for the soul.

Who the hell would lean over and whisper in their significant other’s ear, “Uhm, look, this movie is kinda weirding me out…it’s taking me back to my divorce in the ’90s and I’d rather concentrate on the here-and-now…is it okay if I meet you outside the theatre after it’s over?”

What’s past is past, and difficult times with an ex-wife shouldn’t have any significant bearing upon your current situation. (Unless you’re exactly the same person you were 20 years ago.) What kind of an emotional weakling would run like a coward from Marriage Story? 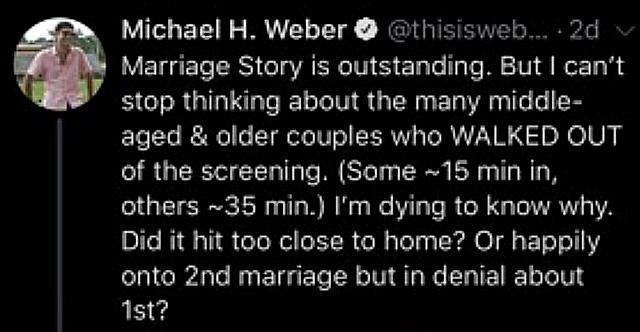 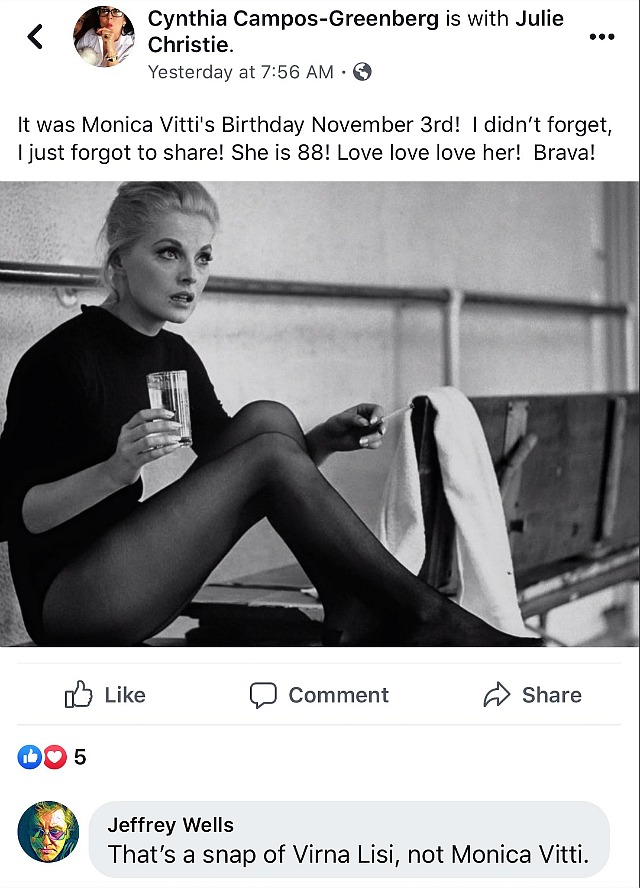 Watch this 60 Minutes piece on Obama. The tone of Steve Kroft‘s questions are mostly in the realm of “really?…what’s the hurry?…where’s the experience?…but you’re black, and are you black enough?”

Don’t kid yourself — the Beast could be re-elected. It follows that I am white-knuckle-terrified of Elizabeth Warren and/or Joe Biden winning the 2020 Democratic nomination.

12 Comments
A Finale Not Chosen

That third-act moment in Marriage Story when the beleagured Charlie (Adam Driver) stands up and sings Stephen Sondheim‘s “Being Alive” in a piano bar and in so doing draws on the pain and regrets and somber self-reflection that he’s been grappling with throughout the whole film…the second after Driver finishes the tune is where Noah Baumbach’s film should have ended. I had this thought upon during my initial Telluride viewing, and now Anthony Lane has stated the same in his New Yorker review. It would have been perfect since the cathartic summing-up in this Company song offers a symmetrical counterbalance to Marriage Story‘s beginning in which Charlie and Scarlett Johansson‘s Nicole recite lists of things they love about each other.

The HE community has had three days and two nights to consider the merits of Marriage Story, which won’t begin streaming on Netflix until 12.6. So?

(1) Everything that Anthony “Michael Corleone” Scaramucci says to Brian Stelter is accurate and ethical and straight on a plate; (2) With the impeachment proceedings starting Wednesday (11.13), will the Democrats put on a powerful, compelling impeachment inquiry?; (3) Why has Stelter gone from close-cropped tennis ball to shaved Yul Brynner sidewalls?