Another boomer dog has been deep-sixed for dicey or questionable behavior with a younger woman in a professional context. Chris Matthews has announced that he’s leaving MSNBC for having conveyed icky sentiments at work. (He didn’t make any moves — just said the wrong thing.)

Needless to say older guys getting #MeToo torpedoed by a complaint (or two) from a younger woman has become a familiar thing — way of the world. Matthews has no one to blame but himself.

Here’s the story — I couldn’t find an embeddable video.

I’m trying to recall if Disney’s The Parent Trap (’61) was the first film in which an actor played identical twins who sometimes appeared in the same frame. I’d like to find an article that explains the mid 20th Century technology that allowed for this, and how it differed from the prevailing method[s] used today.

Twin flicks seemed to accelerate (emphasis on the “s” word) after David Cronenberg‘s Dead Ringers (’88). Since then we’ve seen a shitload. My 21st Century favorites, hands down, are Armie Hammer‘s Winklevoss twins in The Social Network.

Bernie’s Democratic victory next summer will be on him, as will the second ruinous term of Donald J. Trump. I say this knowing that Bernie already has California in the bag. Bernie is Goldwater in ’64 or McGovern in ’72…take your pick. Either way the Beast is good for a second term. What a horrible, horrible situation.

.@BarackObama PLEASE WAKE UP! Today is the day you need to endorse Biden, or else we get Bernie, and whatever is left of the Obama/Biden legacy will go straight down the toilet. This is not a tough call. Step up to the plate! pic.twitter.com/YQLHJLttqy

When I think of the late James Lipton, I think of a knowledgable film maven and a seasoned old-school academic who was very proficient at sophisticated flattery. Dapper and genteel and a Serious Movie Catholic, Lipton reliably secreted that unctuous sauce that brand-name actors live for when they go before the public without a role to play or makeup to wear. His Inside The Actors Studio interviews (’94 to ’18, when Lipton stepped down due to illness) were always subdued love fests, and “talent” loved him for that.

Q: “If heaven exists, what would you like to hear God say when you arrive at the pearly gates?”

A: “After a lifetime of uncertainty and scratching your head, you finally understand that I am everything and nothing and everything within that nothingness, and that we’re just transitioning from one form of matter to another, and great art — music and movies especially — is the only thing that really lasts, and you knew that when you were mortal and hopefully allowed as much great, lip-smacking art into your soul as possible. Now you’ve passed that stage, of course. In a twinkling of an eye you’ll be a baby again, but unless you’re an ESP type you won’t remember a damn thing.”

The withdrawal of Minnesota Senator Amy Klobuchar from the Democratic primary race is a good thing as far as it goes. But “taking one for the team in order to stop Bernie the Destroyer” was Pete Buttigieg‘s idea first — Amy is just following his lead. Except she’s been small potatoes all along, and her forthcoming official endorsement of Joe Biden in Dallas, while approvable and appreciated, won’t mean all that much.

If we really want to stop Bernie Elizabeth Warren and Michael Bloomberg have to bail also, and they probably won’t. Between Biden and Bloomberg who seems more mentally alert with the snapping of electric synapses? Or between Biden and Warren? We all know the answers, and yet it has to be Biden because we can’t fuck around any more. Bernie isn’t just George McGovern in ’72 but also Barry Goldwater in ’64. If he lassos the Democratic nomination we’re all GOING TO HELL with The Beast. 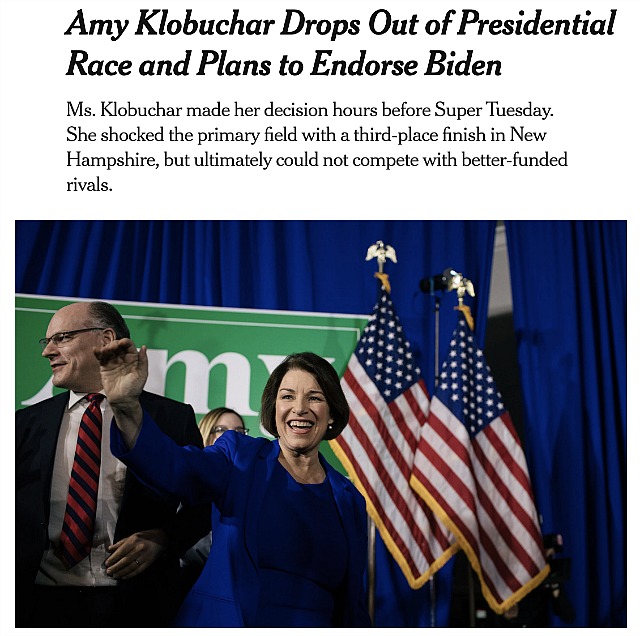 It’s been estimated that The Call of The Wild, a man-befriends-dog-in-the-Alaskan-wilderness movie which cost $125 million to produce, will lose roughly $50 million when all is said and done.

I don’t know how costly the CG work was but we can assume it accounted for a sizable chunk of that $125M. (Probably a similar percentage for the CG work on The Irishman.) Not to mention the $15M or $20M plus points that Harrison “paycheck” Ford scooped up.

Are you telling me that The Call of the Wild would’ve stiffed if the producers had cast, say, Kurt Russell or Tommy Lee Jones or even Clint Eastwood instead of Ford? The family audience would have only required some grizzled old gus with a certain name-brand value. How much would one of those guys cost? Probably under $10 million…right?

And the common consensus is that The Call of the Wild would have been a more emotionally engaging film if it had been shot organically a la Randall Kleiser‘s White Fang (’91), which cost $14 million to shoot (or $27 million in 2020 dollars). Or in the vein of Jean Jacques Annaud‘s The Bear (’88). Or even Disney’s Perri, a real-life squirrel movie produced by Disney in ’57. 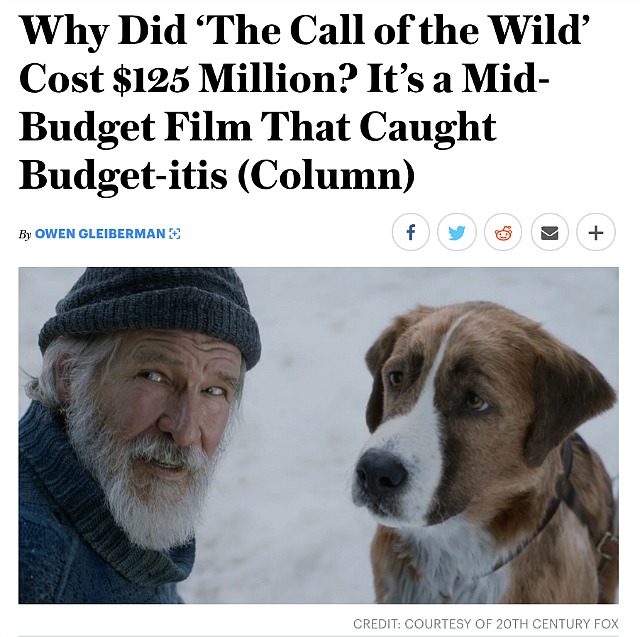 I saw it on Twitter three or four days ago but without any noticable credit. I forgot about it, and then saw it again. So I posted it. Because I really liked it.

Again, I humbly apologize to a fellow film writer (not to mention a Meisner-trained actress). I was thinking and moving too fast, as is my wont. Haste makes waste. Then again examples of unsigned and uncredited revisionist movie poster art appear on Twitter all the time and nobody says boo. They come and go, surface and subside…all part of a relentless daily cycle. Cheers & salutations. 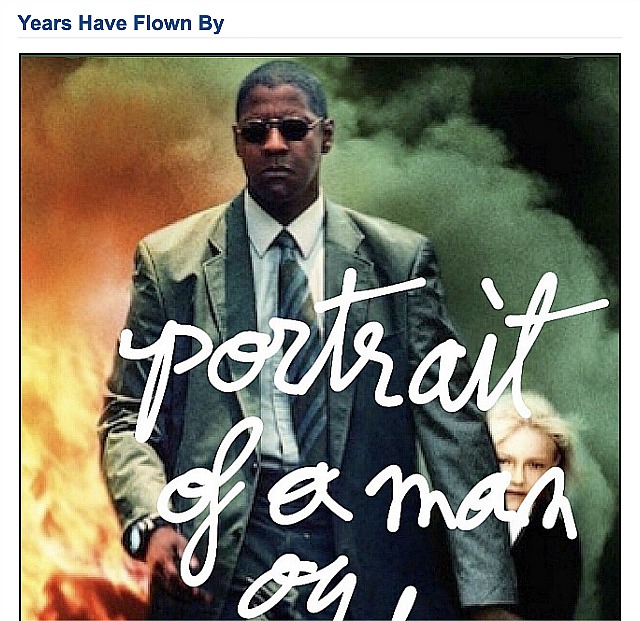