I’m a sucker for well-honed films like Incitement (Greenwich, 4.20), a subdued but fascinating Israeli-made thriller about what Yigal Amir, the Israeli law student who murdered Israeli Prime Minister Yitzhak Rabin on 11.4.95, went through in the year leading up to the slaying.

Unfolding in a fashion vaguely similar to Fred Zinneman‘s Day Of The Jackal (about the failed assassination of Charles De Gaulle) and Mark Robson‘s Nine Hours to Rama (a fictionalized account of the murder of Mahatma Ghandi), Incitement is one of those “here’s how and why a misguided fanatic carried out an infamous deed” flicks.

We obviously know going in that Amir will succeed in murdering Rabin over the divisive Oslo Peace Accord. And yet the film holds our attention while laying on the suspense. The pleasure is all in the assembling.

Incitement boils down to a character study of Amir — devout, soft-spoken, fiercely intelligent — and the influences that led to his carrying out the killing. The film condemns his enablers, principally the fanatical, ultra-nativist Israeli zealots (soldiers, rabbis, political activists) who agree that Rabin has betrayed Israel by trying to “give peace a chance” via the Oslo pact.

An aspect that vaguely annoyed me was Amir’s intense passion for Nava (Daniella Kertesz), a beautiful fellow student who admires and cares for him but feels increasingly skittish about his hardcore rightwing views. Her parents are also skeptical and disapproving.

Amir wants to marry Nava, but also seems increasingly hellbent on murdering Rabin from an early stage in the film. So what’s the point, I was wondering, of getting seriously involved with anyone? Yigal eventually loses Nava’s allegiance, which seems to nail his fate down all the more. If Nava had agreed to marry him he might have decided against murdering Rabin, but, as noted, Amir seems determined early on.

The disaster film cycle of the ’70s consisted of roughly 20 titles, beginning with Airport and The Poseidon Adventure in ’70 and ’72, peaking with The Towering Inferno and Earthquake in ’74, and ending ignominiously with films like The Swarm, Meteor, Hurricane, The Concorde: Airport ’79 and When Time Ran Out. The genre was finally killed off in 1980 by the comic spoof Airplane!.

All popular genre films have reflected real-life social undercurrents — fantasies and fears that Joe and Jane Popcorn were grappling with deep down. Superhero films were essentially ignited by 9/11. The popularity of early ’30s romantic musicals and screwball comedies was fed by the Great Depression. Patriotic war films in the early to late ’40s surged for obvious reasons. The fatalistic film noir genre was about post-WWII gloom (i.e., ex-servicemen and their wives grappling with the loss of spirit and complex social realities). ’50s sci-fi and monster flicks were about cold-war paranoia, fear of Russian atomic bombs, shifting social mores.

What were disaster films essentially about? In a nutshell the fear of late ’60s social upheavals (drugs, rejection of straight-laced values by the counter culture, radical anti-war street demonstrations) by dutiful, lawn-mowing, mortgage-paying middle-class schmoes. The same people who voted for Richard Nixon in ’68 and ’72 and who loved films like That’s Entertainment! and Broadway shows like No No Nanette were especially receptive to disaster films.

Engaged X-factor audiences loved the early to mid ’70s, of course — Hollywood’s greatest creative surge happened between The Graduate and Easy Rider at the launch, and Jaws and Star Wars at the bitter end. But the polyester-wearing middle class was fairly terrified of the noirish mood of the early ’70s era and all the social convulsions.

Which is why a certain amount of credit should be given to Krakatoa, East of Java (’69) for being the first disaster film of that era, the elements having fermented in the mid ’60s and the film shot in ’68.

Krakatoa was unsuccessful critically and commercially and it was a closer relation of The Devil at Four O’Clock than anything else, but on some level producer Philip Yordan was the first to pick up signals that the climate of the late ’60s would be receptive to this kind of fare.

I still don’t want to watch it. It looks like crap.

Wikipedia’s summary of the disaster cycle weirdly omits even a cursory mention of the craftiest, cleverest and most adult-minded disaster film of the ’70s — Richard Lester‘s Juggernaut (’74).

Juggernaut was a kind of sardonic attitude dramedy mixed with subtle, built-in suspense along with a “catch the bad guy” sideplot. It was driven by impending disaster (i.e., bombs aboard a cruise ship), and was therefore first, last and always a disaster film. The difference was that Juggernaut wasn’t aimed at your typical disaster flick audience but film sophisticates who had loved Lester’s The Three Musketeers, Petulia and A Hard Day’s Night.

After the commercial opening Lester was quoted saying that Juggernaut was hurt by people thinking it was a disaster movie “when that wasn’t what it was at all.” Due respect but it was a disaster film. It just happened to be a really good one.

Pauline Kael: “The only disaster picture that has redeemed the genre is Richard Lester’s Juggernaut, which kidded the threadbare pants off the same clichés that the other pictures still try to make work.”

The Juggernaut Wiki page describes it as a “British crime suspense film” — bullshit. The film’s late producer David Picker, with whom I spoke three or four years ago, explicitly recalled that it was greenlit because of the popularity of the disaster cycle.

Excerpt: “Original screenwriter Richard Alan Simmons would have produced and Bryan Forbes was to direct with Richard Harris starring [and the] film starting in January 1974.

“Forbes left the project, however, as did his replacement, Don Medford. Picker then turned to Lester, with whom he had made a number of films at United Artists. Lester was finishing work on the Musketeers films in Spain when he got a call from Denis O’Dell saying “We just fired our second director and I’ve got a Russian ship and we’ve got to leave on 18 February. Will you take it on?”

“‘I think if I’d sat carefully and thought about it I wouldn’t have done it,’ said Lester later. ‘It was very exciting. And I think that energy of getting it right carried it through. It was a wonderful experience, great fun.’

“Simmons was so unhappy with the reworked script that he had himself credited as Richard DeKoker on the finished film.”

Juggernaut opened on 9.25.74. It wasn’t a commercial disaster but it under-performed ($3.4 million gross) by disaster movie standards. Average audiences looked at the trailers and read the reviews and said, “Not schlocky enough!” 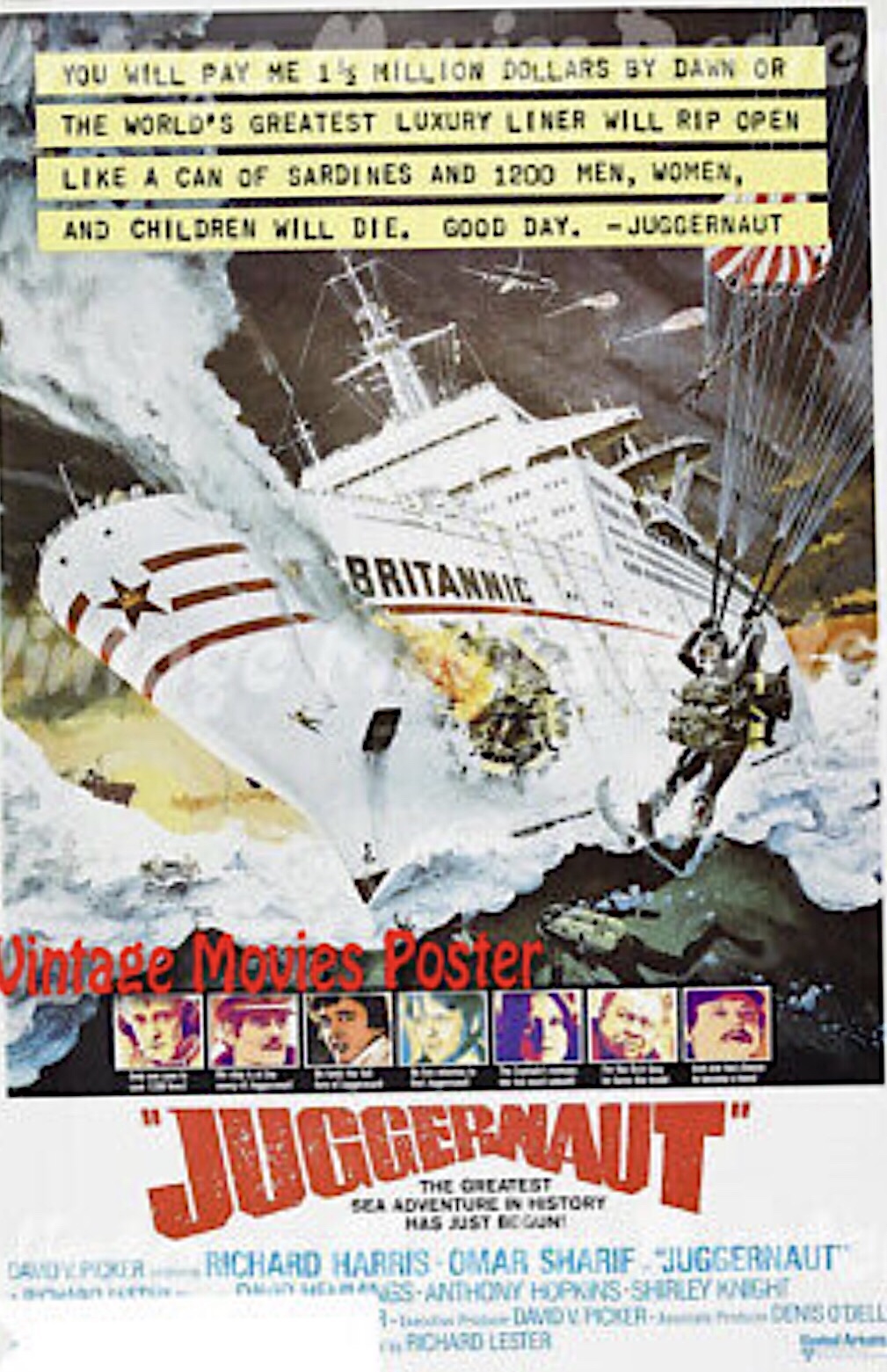 The Wizard of Oz TV blurb has been a meme for years, but I posted the below reply last night.

William Wyler and Lillian Hellman‘s Dead End (’37 — based on a 1935 hit play by Sidney Kingsley) and Michael Curtiz‘s Angels With Dirty Faces (’38) were the only decent films costarring the Bowery Boys, but then you knew that. Largely, I would say, because the Bowery Boys weren’t the leads in either film — they were used as social context, attitude flavor, etc. 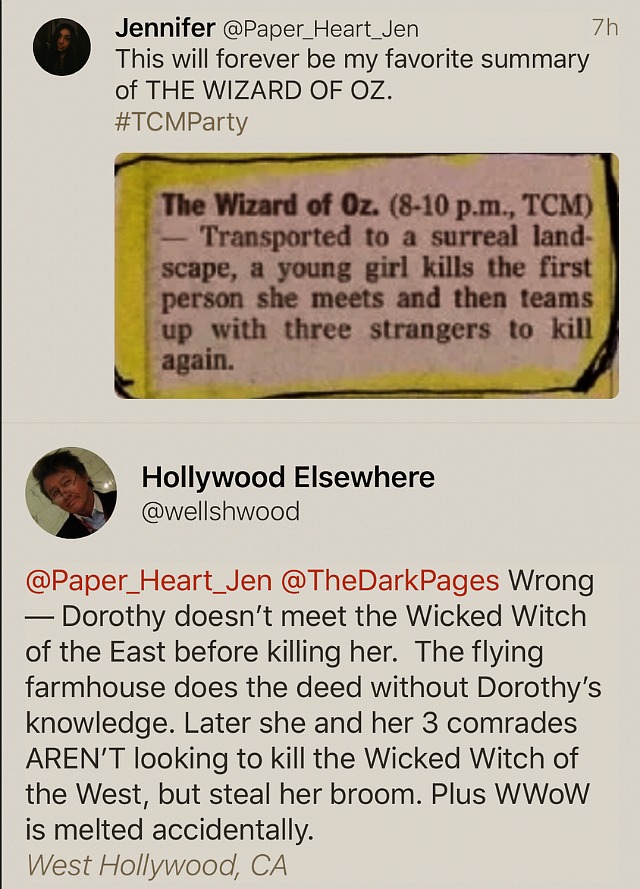 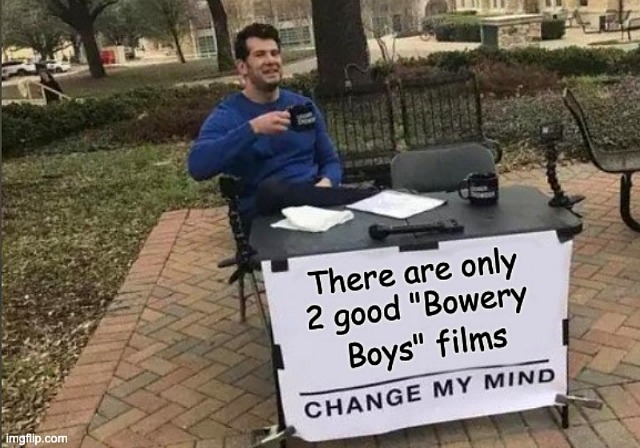 The blending of Biden and “Bye Don” isn’t bad, but the most effective Biden slogan — DECENCY ’20 — doesn’t need his name. Because it emphasizes a positive value rather than the negative specter of Trump and the removal of a dangerous sociopath from office. It isn’t essential to mention One-Term Joe. We all know he’s the only well-fortified, trust-inspiring person whom we can reasonably expect to fill the Oval Office slot as a temporary stopgap, and that his victory in ’20 will pave the way for Newsom or Cuomo or Gretchen Whitmer in ’24.

I realize there’s a decent chance of Biden picking Kamala Harris for his vp, and if so she’s locked in for the ’24 race. But why didn’t she catch on at least somewhat during the recent Democratic primaries? You have to ask yourself that — she had one moment when she challenged Biden on his decades-old busing policies, and that was it. I always liked and admired Harris as far as it went but…

If Joe Biden fails to beat Donald Trump next November, a significant amount of blame (if not the lion’s share) will be on the shoulders of disgruntled Bernie Bros. The term is “Broxit” — the hardcore Bernie faithful bailing on the Democrat ticket by (a) staying home, (b) voting for Trump outright (as 12% of the flock did in ’16) or (c) promoting a Jill Stein-like third party alternative.

I was not a big Hillary Clinton fan in ’16, but I wasn’t Susan Sarandon either. The only intelligent and constructive thing to do with the lurking threat of Trump was to shake it off and vote for her — which I did. One-Term Joe has issues, granted, but far fewer negatives than Hillary. And his election would signify a return to decency and normalcy. There’s no alternative but to vote for him.

HE to Robert “Kid Notorious” Evans: As the most ardent Sanders supporter on this site, how real is the “Broxit” thing? And when push comes to shove — when it’s a choice between a sensible, fair-minded moderate liberal like Joe and the most dangerous sociopath President in the history of this nation, will you vote for Biden or not? 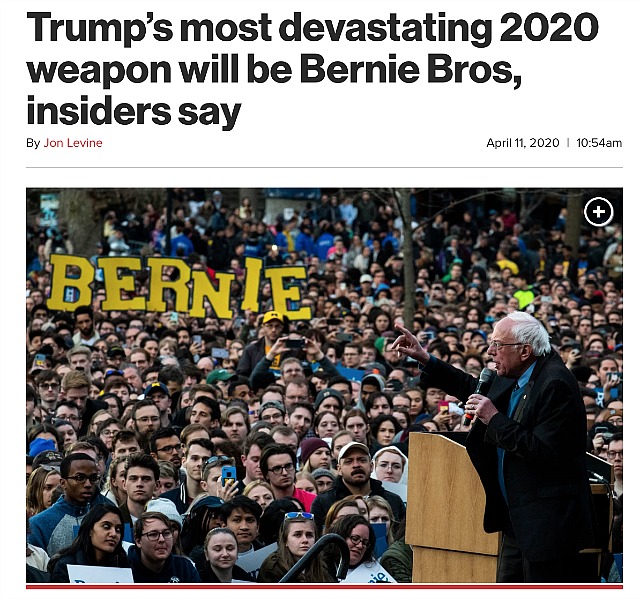 The Anak Krakatau volcano experienced a pair of relatively minor eruptions yesterday. They weren’t nearly as bad, I mean, as the Anak Krakatau eruption of 12.22.18, which launched a tsunami that took 437 lives. The volcano is located in Lampung, which is located between the islands of Java and Sumatra.

I was reminded that despite a noteworthy mention in Quentin Tarantino‘s Once Upon A Time in Hollywood, I’ve never had the slightest interest in watching Krakatoa, East of Java (’69), directed by Bernard Kowalski and costarring Maximilian Schell (when he was still slender and movie-star handsome, before he turned into Akim Tamiroff), Diane Baker, Brian Keith and Sal Mineo. It’s free on Amazon Prime.

Wiki excerpt: “The story is loosely based on events surrounding the 1883 eruption of the volcano on the island of Krakatoa, which is actually west of Java, but the producers thought that ‘East’ was a more atmospheric word, as it is located in the Far East. The characters are engaged in the recovery of a cargo of pearls from a shipwreck perilously close to the volcano.”