Support on Patreon Follow @wellshwood
61 Comments
Second To None

There’s nothing factually unknown in Timothy Egan’s 5.8 N.Y. Times column, titled “The World Is Taking Pity on Us.” But I admire the discipline, concise phrasing, no beating around the bush, etc.

Excerpt: “In Trump’s assessment, his government has done a ‘spectacular job’ with the Covid-19 pandemic.

“’And I’ll tell you, the whole world is excited watching us because we’re leading the world,’ Trump said in an updated pat on the back.

“He’s right about the leading part: Every 49 seconds or so, throughout the first week in May, an American has been dying of this disease. With 1.3 million reported cases, the United States, just five percent of the world’s population, has nearly 33 percent of the sick. With more than 75,000 deaths, we’re at the front of the pack as well. No country comes close on all three measures.

“Globally, the average death rate is 34 people per million residents. In the United States, it’s more than six times higher — 232 per million.

“South Korea and the United States both reported their first cases of Covid-19 at the same time, in the third week of January. South Korea immediately started testing on a mass scale and socially isolating. The United States denied, dithered and did next to nothing for more than two months.”

Last night I became a better-late-than-never fan of Slade‘s “Gudbuy T’ Jane” (’72). I was surfing on the couch with my wireless headphones, and for some random-ass reason I happened upon “Jane” and played it full-blast. And this shallow but well-performed, perfectly mixed song just carried me away.

Mainly because of the guitars (I love how that central lead guitar riff cuts into the third chorus refrain before it ends) and Noddy Holder‘s voice (great name!). All I know is that the pandemic flew out the window and I was feeling like a happy drunken teenager.

I never had time for Slade in the old days. I looked down on them as flamboyant glitter clowns in silver-painted platforms.

The same thing happened a couple of weeks ago with Grand Funk Railroad‘s “I’m Your Captain.” I never liked it much, and always thought GFR was too Michigan, too primitive, too blue-collar. But for some reason I found myself really liking “Captain” (except for the “getting closer to my home” second part, which still blows). Again, the guitar work.

I was always somewhat attracted to the idea of buying this or that Twilight Time Bluray, but I rarely did because they charged too much. Their brand exuded a touch of class but they weren’t Criterion — they never did the heavy restoration lifting. (On the other hand their color Blurays were never teal-tinted.) I want my Blurays to cost $20 bills or thereabouts, and Twilight Time always charged closer to $30 and sometimes higher.

And now they’ve gone belly-up. I’m sorry — I don’t like to see any outfit devoted to distributing HD cinema go under. Then again on 5.11 (tomorrow) I’ll be able to buy some of their titles at bargain basement prices.

Posted today (5.10) by Twilight Time management: “After nine years of successful operations in which 380 motion pictures from the 1930s to the 2010s have been released on DVD and Bluray disc, the home video label Twilight Time — founded by veteran Hollywood studio executives and filmmakers Brian Jamieson and the late, dearly celebrated Nick Redman — will not release any further titles and we will be winding down operations this summer. A changing market, the rising costs of title acquisitions and Redman’s passing are key reasons for the closure.

“Cinemagistics/TwilightTimeMovies.com will continue to sell titles while available through June 30th, at which time they and Twilight Time will cease operations. Remaining inventory will be acquired and distributed exclusively by Screen Archives — effective July 1st 2020.” 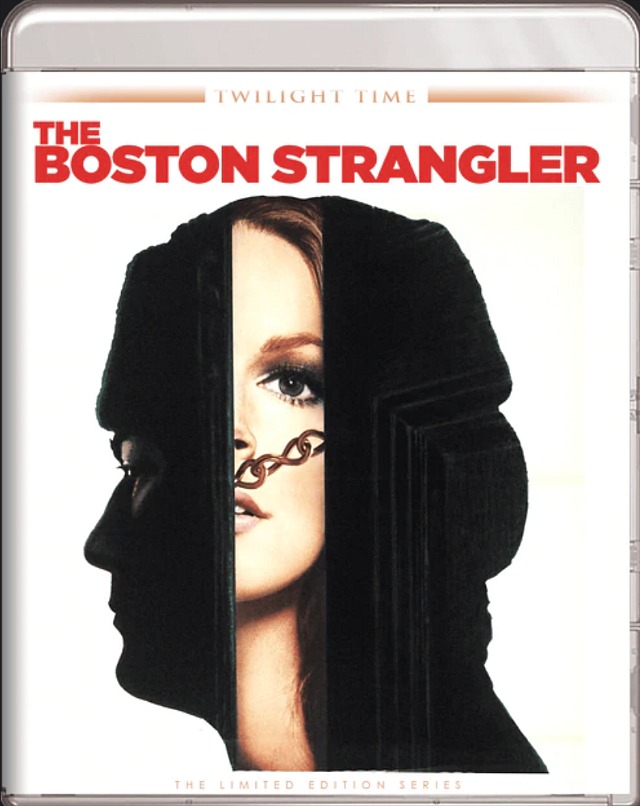 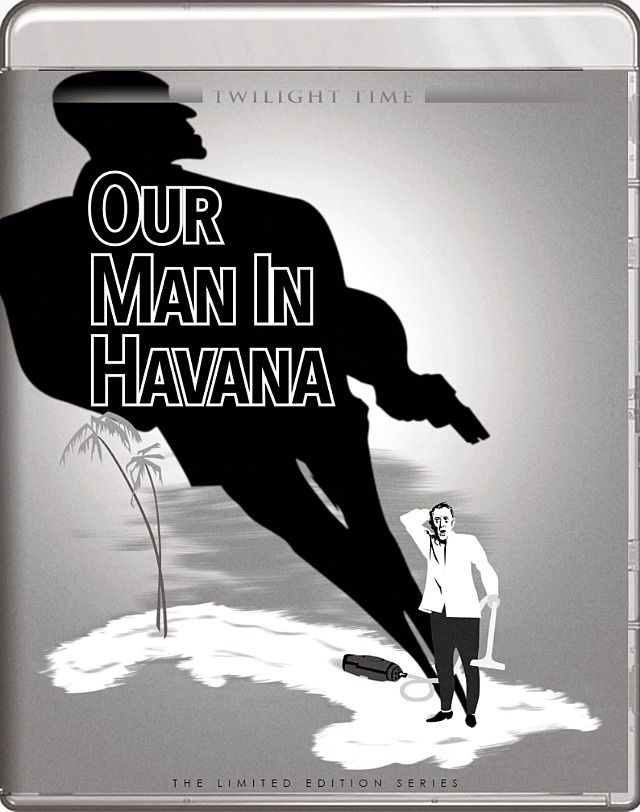 20 Comments
All But Unwatchable

After reviewing Natalie Wood: What Remains Behind (HBO, now streaming), I began to poke around her filmography and consider her less successful films. I wound up focusing on Richard Quine‘s Sex and the Single Girl (’64), a strenuous, tedious sex farce that nonetheless became a commercial hit. God forgive me but I read the Wiki page, watched the trailer and read two or three reviews.

Wood played a mythical version of “Sex and the Single Girl” author Helen Gurley Brown, who was 42 in actuality while Wood’s version is a couple of decades younger and on the prim and proper side. Tony Curtis played Bob Weston, a reporter for a scandal magazine looking to expose Brown as “a 23 year-old virgin” and therefore a pretender in matters of sexual experience.

The below promotional photo of Curtis and Wood (they both seem to be thinking “oh, dear God…the lack of modesty!”) was aimed at lowest-common-denominator prudes circa 1964, and therefore reflected a safe marketing strategy. It’s nonetheless infuriating if you think about it for five or six seconds.

Tony Curtis, Natalie Wood in a promotional pose for Sex and the Single Girl (’64).

Forget the plot line — if a 39 year-old hound dog (Curtis was born in ’25) was reading “Sex and the Single Girl” his expression would be one of arousal and anticipatory satisfaction, as frank descriptions of the sexual escapades of a moderate-minded single woman would indicate all kinds of randy, rompy activity in his immediate future.

And why in heaven would the author of said book express shock or amazement? Did Quine or the producers believe that movie stars and the characters they play should have at least a glancing relationship with the same reality? Jesus God…Wood had a brief affair with Rebel Without A Cause director Nicholas Ray when she was 16 or 17, and eight or nine years later…oh, forget it.

“Sex and the Single Girl brought out the single gals in droves and clusters yesterday to the Rivoli and the Trans-Lux 52d Street. One mildewed bachelor, fearing disaster, bravely latched on to a balcony perch and finally exited with a slight stagger.

“It’s not the worst picture ever made, girls and boys. No kidding! Not even with Natalie Wood being archly pursued by Tony Curtis for over two hours and, most fortunately, with Lauren Bacall, Henry Fonda and Mel Ferrer bringing up the rear.

“That simpering title — all that’s left of Helen Gurley Brown‘s hope-chest best-seller — still tells the story and flavor of this Warners release. Now there’s a plot, involving Miss Wood as Helen Gurley Brown, a maidenly, 23-year-old research psychologist on advanced marital and pre-marital studies. Yeah, man! And Mr. Curtis is a scandal-magazine writer who blasts Dr. Wood’s (or Brown’s) best-selling book, then stalks her personally, blandly borrowing the problems of his neighbors for soulful couch musings and amorous bait.

A November 2019 HE plus piece, liberated from the paywall: Almost all mainstream Hollywood sex comedies of the early to mid ’60s are pretty close to unwatchable now. (Can anyone think of a single tolerable film in this vein?) A year or two ago I was close to condemning Lover Come Back as the most painfully unfunny of them all, but they’re all horrendous to sit through.

Any way you slice it, ’60 to ’65 was a truly grotesque era when it came to farcical middle-class comedies.

Frontline commercial filmmakers of the early to mid ’60s had been aroused and influenced by French nouvelle vague and the British kitchen-sink genre, both of which ignited in the late ’50s. This resulted in frank sexual situations in several early ’60s dramas — Billy Wilder‘s The Apartment (which may have been the first Hollywood dramedy of a sexual nature), Alfred Hitchcock‘s Psycho, Lewis Milestone‘s Ocean’s 11, Richard Quine‘s Strangers When We Meet, William Wyler‘s The Children’s Hour, Stanley Kubrick‘s Lolita, Alexander Singer‘s A Cold Wind in August, Vincent Minnelli‘s Two Weeks in Anther Town, Joshua Logan‘s Fanny.

But at the same time a steady outpouring of constipated sex comedies — largely inspired by the triple-whammy of Ross Hunter‘s Pillow Talk, Wilder’s Some Like It Hot and the Oscar-awarded The Apartment along with increasingly randy Playboy stirrings in the culture at large — began to manifest.

All that sexual interest, energy and intrigue, and almost all of it shackled and smothered. So many U.S. comedies about characters wanting to get randy, and all of them constrained because of the industry’s still-prevailing production code, which didn’t begin to erode until ’66 or thereabouts.

The taboo-dialogue groundbreaker was Mike Nichols‘ Who’s Afraid of Virginia Wolff, which opened on 6.21.66. Believe it or not, it was regarded as a big deal when Elizabeth Taylor‘s Martha said “goddam you!” (a substitute for the original “screw you!” in the stage version) to Richard Burton‘s George. Mainstream sexual frankness followed in short order (particularly in ’67’s The Graduate, The President’s Analyst, Belle du Jour, Reflections in a Golden Eye, Hurry Sundown and Bonnie and Clyde), and the industry was off to the races.

An HE commenter recently wrote that most early to mid ’60s sex farces are “not just bad by present standards but borderline inexplicable. They couldn’t talk about much and they couldn’t do anything, and the elaborate artificiality produces an effect not unlike a Kabuki play.”

Another said that “any film in which you hear smarmy saxophone over a close-up of a zaftig woman’s ass as she sashays out of a room is a piece of shit. And almost every sex farce from 1960-’66 had that exact shot.”

“William Barr’s Perversion of Justice,” a lead editorial by the N.Y. Times editorial board, presents a clear case that Trump’s attorney general is little more than a thug and a boot licker — that he’s “turning the Justice Department into a political weapon for the president” and hasn’t the slightest regard for the rule of law. But for me, the keeper is the illustration by Nicholas Konrad, which elaborates upon a photograph by Times staff photographer T.J. Kirkpatrick. 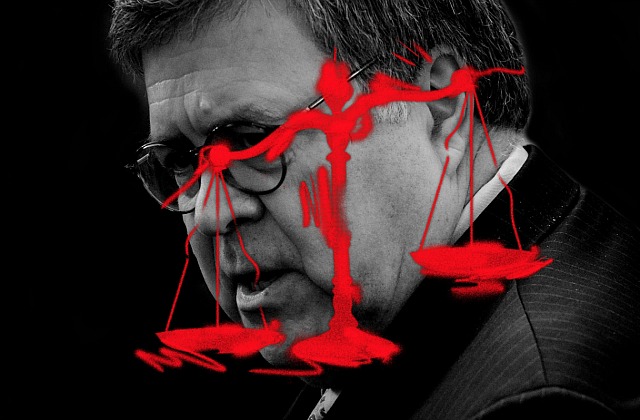