N.Y. Times staffers representing the BLM chapter of the wokester Khmer Rouge have apparently forced the resignation of poor James Bennet, the Times editorial page editor who approved the publishing of Tom Cotton‘s controversial “Send In The Troops” op-ed, which basically said U.S. troops should be used to stop looters.

BLM supporters were outraged (i.e., “Tom Cotton’s Fascist Op-Ed” by Michelle Goldberg), believing that such a move might endanger the lives of Times employees of color. This led to an intense backlash against the article, and then Bennet himself.

Bennet initially defended his decision as an expression of the op-ed section’s policy of offering a forum for occasionally non-liberal viewpoints. But the wokesters wouldn’t have it. Bennet and exec editor Dean Bacquet soon wimped out, saying that the column shouldn’t have run in the first place because it didn’t meet Times standards blah blah. Wokester standards, they meant.

Update: Bennet has stated that he didn’t read the Cotton piece before it ran. Of all the op-eds he forgot to read this is the one he dropped the ball on? THIS ONE? I find this flabbergasting, too absurd to be true, ice cream cone smashed into forehead, etc.

Back to article: Are wokester progressives turning into fascists? Have they decided that intolerance is the only way to go henceforth?

It would appear that op-ed-wise (and perhaps in other ways), the N.Y. Times is no longer a sensibly liberal, fair-minded, free-speech paper of record, certainly when it comes to issues and opinions that reflect upon people of color and particularly the forces that seem to be either vaguely or unmistakably against humanist social goals, or are vaguely or unmistakably in league with white supremacists and/or separatists, namely Trump Nation and many organs of local law enforcement.

Nobody sensible is arguing against wokester ideals and beliefs (particularly rooting out systemic racism in the nation’s police departments), but who isn’t horrified by cancel-culture fanatics muscling their way into power at the N.Y. Times with the idea of (dare I say it?) rooting out anyone else who might think like James Bennet? And thereby turning the Times into a force for our-way-or-the-highway absolutism?

What is the difference between the BLM Khmer Rouge suppressing op-ed pieces and scorning ideas that are viewed as subversive of or opposed to wokester ideals and…I don’t want to say it because it’ll sound wrong. But we’re basically witnessing the assertion of lefty progressive fascism.

I had to return to Tijuana’s Baja Oral Center on Monday to finish up some crown work, so we decided to stay a couple of days at the beachside, reasonably priced Poco Cielo hotel.

It’s about 50 minutes down the coast — just south of Puerto Nuevo, a half-hour north of Enseneda. Loving it all again, especially the fact that everyone down here is relatively relaxed on the pandemic stuff.

We felt badly about leaving Anya, our three-year-old Siamese female, for 48 hours, so we took her along. She didn’t freak out too badly on the way down — she was actually calm and cool for the most part — but she found the exotic air of Mexico alarming. She hugged me (and I her) like a frightened two-year-old child when we first entered the hotel room. She’s fine now. All cats hate travel.

But at least Anya can now say to herself, “I have now seen more than a small pocket of West Hollywood and have settled into a much more colorful realm than some swank hotel in Santa Barbara…I have seen a bit of the world, you bet!” 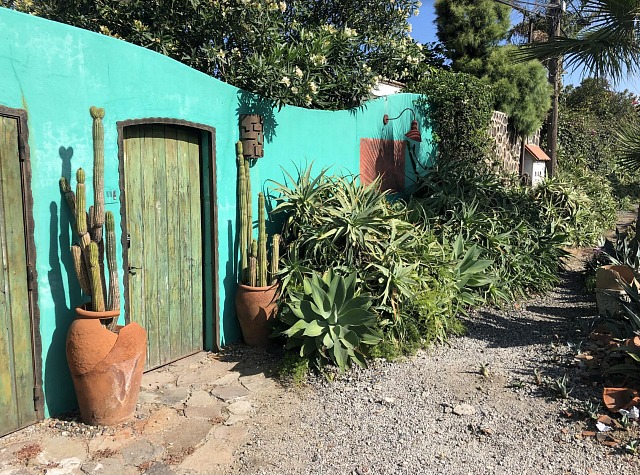 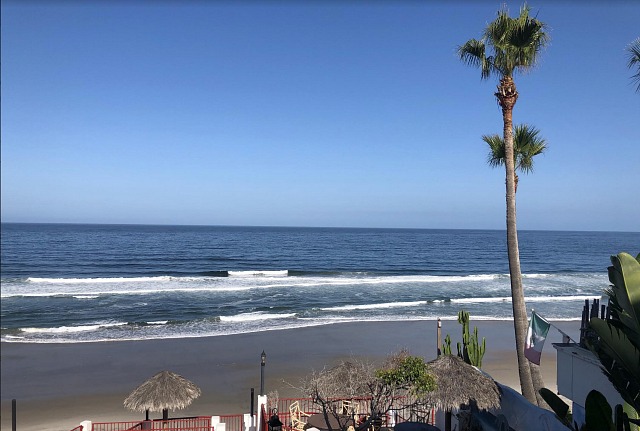 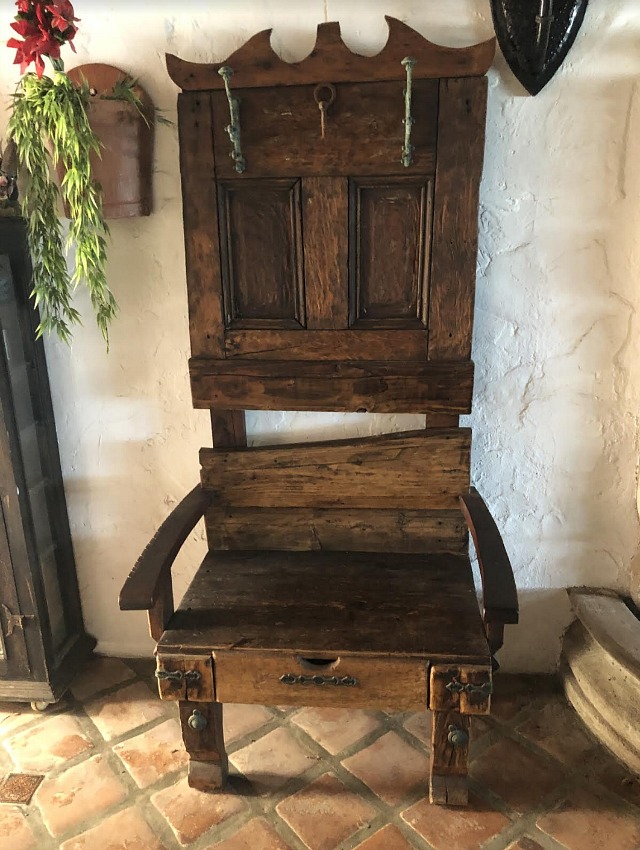 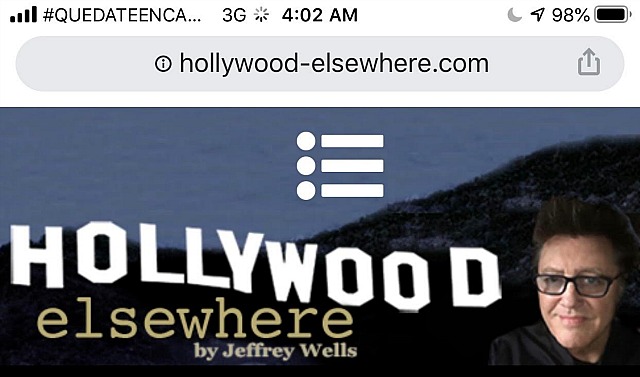 This part of Mexico is a 3G realm, I’m afraid, although the wifi inside the hotel restaurant is fine. 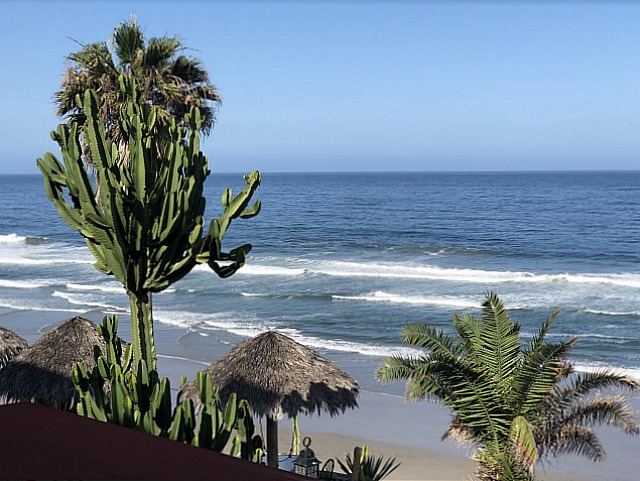 Just before Christmas of 2016 I purchased a UHD 4K streaming version of Lawrence of Arabia, which had been released almost a year earlier. I was deeply impressed or, as I wrote on 12.20.16, “really, seriously stunned by the micro-detail.”

I knew it wasn’t real-deal 4K because of digital compressing, and that it actually represented an image density that was somewhere between 2K and 3K.

And yet “for the first time in my life, I was noticing textures in Freddie Young‘s 70mm cinematography (wood grain, extra-tiny sand pebbles, wardrobe threads, even the subtle composition of fine cement in the opening credits sequence) that I’d literally never seen before, not with this degree of crispness and clarity, and that’s saying something.”

On June 16th fans of David Lean’s 1962 Oscar-winner will be able to own a 4K version, even though it’ll cost them $111.82 because it’s part of a box-set package deal that includes Mr. Smith Goes to Washington, Dr. Strangelove, Gandhi, A League of Their Own and Jerry Maguire. 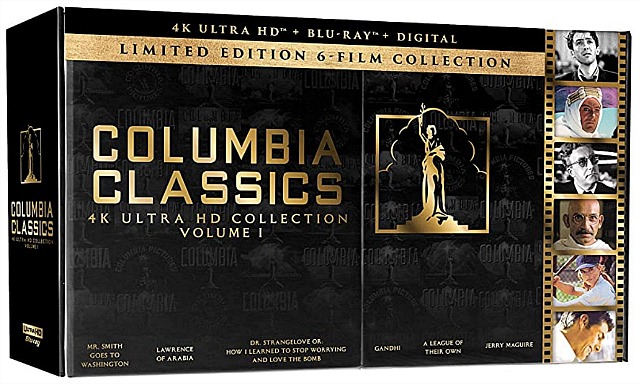 This morning I asked restoration guru Robert Harris, who guided the original 1988 restoration (and who worked closely with Lean for weeks on end) and was involved on all levels with the newbie, how the 4K disc version compares with the streaming version.

“Far better,” Harris replied. “The streaming version is, of necessity, highly compressed. The 4k UHD is spread over 2 triple-layer discs. No comparison. Gandhi and A League Of Their Own are also magnificent. They look like film. But Aurens…other-worldly.”

The 4K UHD Lawrence, he said, is “the equivalent of 750-800 pounds of 70mm film on 13 reels, captured to a couple of discs that probably weigh about an ounce.”

“Everything that one might wish for is here. The film has been split across two discs, for maximum data throughput. Dolby Atmos has been added for a bit of height, which works nicely. Color, black levels, shadow detail and general densities all work nicely. Grain structure is superb. Image stability is perfect.

“For those unaccustomed to the film, be aware that it’s four hours long, has no women with speaking roles, spends hours watching men cross deserts on camels, and has no musical numbers.

“It’s all about this slightly looney Brit who seems to enjoy pain, and takes pleasure in burning himself with matches.

“It was originally released in December of 1962 at 232 minutes inclusive of music. In January, twenty minutes was removed, making certain sequences a bit incoherent, and in 1970, supposedly only for American TV, it was shorn of another fifteen minutes, leading to a wonderful article in the New York Times, entitled ‘Look What They’ve Done to Lawrence of Arabia Now.’

“Most people seemed to enjoy the 202-minute cut (212 with music), until a slightly looney American became involved and put back most of the pieces that had been cut, finally ending up with a Director’s Cut at 227 minutes with music.

“Those elements were digitized in 2012 by Columbia’s Grover Crisp, leading to what we have today.”

Except from Bluray.com review: “To be perfectly frank, the entirety of the Columbia Classics collection is worth buying for the UHD Lawrence alone. One can almost consider the other five films bonuses. This one looks that good. It’s breathtaking, and it’s impossible to imagine even the most stringent videophile not smiling the whole way through.

“The Atmos soundtrack is first-rate, too. There is one new, brief extra but the carryover content is perfectly fine in support. What a gem of a film and of a UHD. Of course, Lawrence of Arabia‘s UHD disc earns my highest recommendation.”

“How could we possibly, in a brief stretch, have gone from the euphoria of our first black president to the desolation of racial strife ripping apart the country?” — from Maureen Dowd‘s 1.6.20 N.Y. Times column, “Bonfire of Trump’s Vanity.”

Answer: Easy. In an election year that saw serious groundswell enthusiasm for renegade change-agent Bernie Sanders and an even stronger surge for wildcard con man Donald Trump from racially resentful bumblefucks, the mainstream Democratic machine nominated Hillary Clinton, whose negatives were sky high from start to finish. That‘s how.

"Pepper spray is not a chemical irritant. It's not chemical" — AG Barr uses painstaking distinctions to defend the use of force against protesters near the White House last Monday pic.twitter.com/CQbtqLwfIk