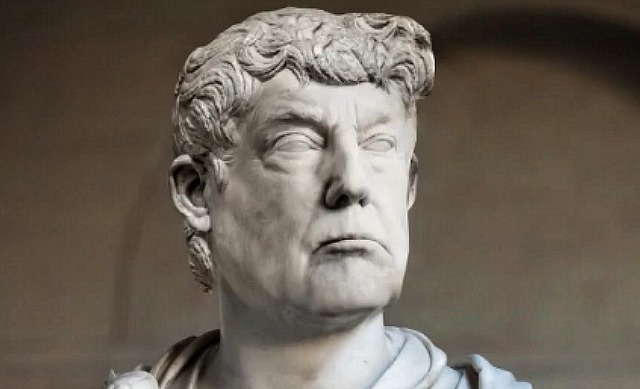 What pandemic? Toss the masks. Have a brewski.

15 Comments
Just Not That Into You

Imagine all the exhausting work that went into installing the suicide lever, and particularly the reasoning for having it in the first place.

“Let’s see…there’s always a chance I’ll be feeling a little down-in-the-dumps one of these days, and that I may want to kill myself,” Henry Frankenstein (or was it Doctor Pretorius?) might have reasoned. “But instead of swallowing a painless black capsule, wouldn’t it be far preferable to tumble to my death while being crushed by heavy stones?”

Christopher Nolan‘s Tenet ain’t openin’ on July 17th no more. The super-expensive, time-shifting Warner Bros, release, which exhibitors are counting on to re-start theatrical with a bang, will now open on 7.31.20, or two weeks later. It was also announced today that Wonder Woman 1984, which had been slated to open on 8.2, has been bumped back two months to 10.2.20. Obviously the feeling is that Joe and Jane Popcorn may not be as ready to return to theatres as presumed.

I hereby propose the immediate lifetime cancelling of Robert Downey, Jr. and Ben Stiller for this heinous spoonful of cinematic cyanide satire, and of course the immediate removal of Tropic Thunder itself from all streaming services. Not. Kidding. Goofing around. 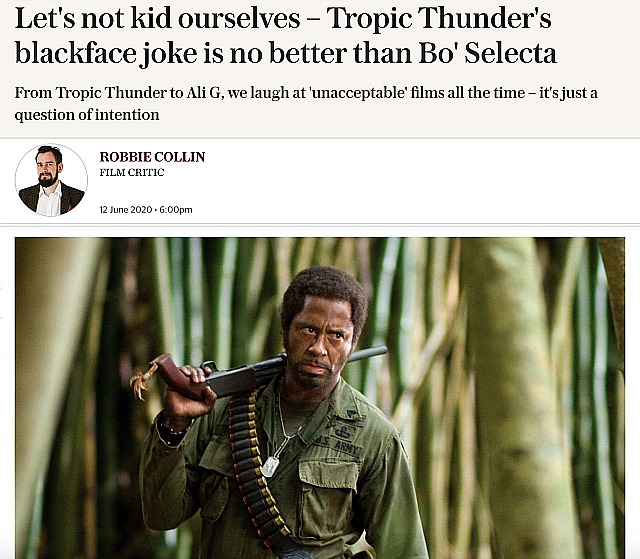 “Try To Imagine Tropic Thunder Being Released Now,” posted on 11.9.18:

There’s quite a striking difference in the RT reactions to Judd Apatow‘s The King of Staten Island — critics are less enthused (69%) than the mostly tickled-and-satisfied Joe Popcorn crowd (90%). A similar critical disparity is happening with Spike Lee‘s Da 5 Bloods — 91% thumbs-up from critics compared to a 78% Joe Popcorn rating.

Reddit reactions to Da 5 Bloods are all over the map — it’s either a home run or a bunt.

HE reminder: “The King of Staten Island made me smile and guffaw and even laugh out loud several times (highly unusual for an LQTM-er). And I believed every word of it…every line, emotion, situation, character. It’s peddling sardonic humor that doesn’t feel schticky, although I guess it is. The tone is low-key raw, kinda nervy, certainly unpretentious and 90% bullshit-free.

“Okay, it softens up during the final passage, but I welcomed this with open arms. Because a film about wall-to-wall, start-to-finish nihilism would be too much. And the length (136 minutes) doesn’t feel longish but completely necessary and natural.”

Yes, I’m aware that the “Blac Rabbit” version is a year old, but it only took off yesterday on Twitter. Sidenote: I’ve said this before but the alternate version of “Eight Days A Week” (with the opening and closing “ooooh”) is much more transportive than the official version.

These guys knocking “Eight Days a Week” out of the fucking park on an NYC subway platform is fantastic … pic.twitter.com/XRnyDNIuN2

In an official statement called “Academy Aperture 2025,” Academy CEO Dawn Hudson has announced new efforts to increase diversity in the film community, including plans for a more inclusive Oscar race.

“While the Academy has made strides, we know there is much more work to be done in order to ensure equitable opportunities across the board,” Hudson said in a statement. “The need to address this issue is urgent. To that end, we will amend — and continue to examine — our rules and procedures to ensure that all voices are heard and celebrated.”

To this end, “the Academy and the Producers Guild of America (PGA) are creating a task force of industry leaders “to develop and implement new representation and inclusion standards for Oscars eligibility by July 31, 2020.”

Right away I asked myself “what exactly will this mean”?

More Academy members of color and different cultures, one presumes, but what else?

Are we talking about some kind of new Hays Code, only this time focusing on racial inclusion and positive messaging rather than matters of sexual behavior and violence and immorality, which sparked the establishment of conservative depiction standards in films starting in ‘34 and lasting until ‘66 or ’67?

Inclusion standards in terms of what? Subject matter? As in “stories that don’t reflect or represent positive attitudes and dynamics about ethnicity vs. whiteness”?

Are we talking about a new industry-wide standard that might result in films like Mank, set in the early 40s and concerned largely with white characters, being vaguely frowned upon?

I’m just thinking out loud but what would “new representation and inclusion standards” actually mean?

A couple of hours ago I asked a couple of Academy spokespersons for some specific clarification…crickets.

Journo pally #1: “Yes, you should ask all these questions, publicly. Representing those of us who can’t.”

Journo pally #2: “All very good questions about a clear move to restore the kind of rules and censorship many of us worked very hard to sweep away in the late ’60 and early ‘70s. The days of ‘anything goes’ are coming to a close. Look at the banning of Gone With the Wind. Is everyone so delicate they can’t look at things made in the past under different circumstances and put them in historical perspective?” 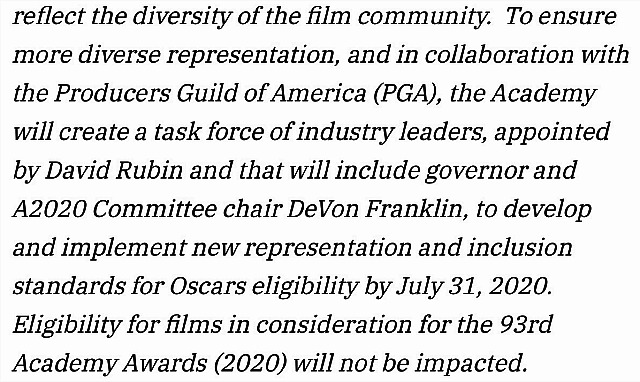 Dave Chappelle‘s George Floyd riff starts at the 5:00 mark and ends at 7:30. And then it picks up again after the 8:00 mark. But in the middle of this, at 7:35, comes his Don Lemon riff, which made me laugh out loud. After describing Lemon as “that hotbed of reality,” Chappelle says he flinched when Lemon called out showbiz celebrities for not being sufficiently angry or demonstrative enough about Floyd’s murder. “This [n-word] was talkin’ about everybody…I was screamin’ at the TV, ‘I dare you to say me, [n-word]….I dare you. This is the streets talkin’ for themselves…they don’t need me right now.”

The 26-minute set was filmed on Saturday, June 6 in Yellow Springs, Ohio.