The acrobatics are applaudable, but who climbs up the side of a building in shiny leather street shoes? Especially while wearing glasses and a straw hat? Almost dying from falling five or six stories and slamming into the pavement at 100 mph is deeply unsettling and therefore not the least bit entertaining. This is basically a stretched-to-the-limits-of-crediblity suspense sequence, and over-rated at that. Sidenote: Harold Lloyd died in ’71, but I was invited to a party at his Green Acres estate (or at least what remained of it) sometime in ’83. I’ve never forgotten the magnificent 1920s interior design (Mediterranean / Italian Renaissance) and furnishings, particularly the Tiffany lamps.

As we all know, official support for Flash will finally end on 12.31.20, with interactive HTML5 content replacing it. HTML5 is lightweight, fast and takes less time to render web pages whereas Flash is CPU intensive and not as lightweight as compared to HTML5.

I writing to ask you or a PicMonkey colleague to please explain IN DUMB PERSON LANGUAGE what will be be specifically different in terms of capturing and refining images on PicMonkey after Flash is discontinued and HTML5 kicks in.

I know how everything works now as I’ve been using PicMonkey for several years. I capture an image, save it to my desktop and then use PicMonkey to crop and enhance or what-have-you. But I want to know how things will be different (if at all) after 12.31.20.

Kindly don’t answer with confusing techno-jargon. Just talk to me like I’M A CHILD….like I’M AN IDIOT…like I’m a GOLDEN RETRIEVER…what exactly will be different in terms of commands, basic capturings, refinings and whatnot.

And please promise me you won’t dump classic or, as you describe it, “old” PicMonkey in favor of your reprehensible new version[s], which are apparently aimed at the tens of millions of vapid, ADD-afflicted, selfie-taking, Tik Tok-frequenters out there.

Thank you very much & have a nice day.

I understand the idea that it’s not a desirable thing if too many people are laughing and chatting and kicking back during principal photography (Brian De Palma used to frown at same). But if you’ve even hung out on a set you know it’s all about waiting for the director and the dp to create the right lighting and figure out the camera movement, and that this always takes hours and hours. So denying people the option of sitting down (even in jest) is, like, “what?”

It has been revealed that famed Director, Christopher Nolan, does not allow chairs on sets pic.twitter.com/OFu0QdNKut

12 Comments
No Boxy, No Buy

So it’s been semi-confirmed that the slightly more risque version of Psycho (half-glimpse of Janet Leigh side boob, extra stabbings of Martin Balsam) will be included in Universal Home Video’s forthcoming 4K UHD Alfred Hitchcock box set. Terrific, but it’s not enough. As I explained a couple of weeks ago, the only thing that will deliver serious tumescence will be the boxy (1.37:1) version of Psycho — a version that was shown on TV and pay cable tens of thousands of times during the ’70s, ’80s and ’90s. It was only in the mid aughts, or when the influence of Bob Furmanek and the 1.85 fascist cabal began to hold sway, that the idea of only showing a cleavered version of Hitchcock’s 1960 classic became the default go-to. HE believes that aspect ratio crimes should be prosecuted in the Hague, and that Furmanek, no offense, should be defendant #1 in the dock.

Initially posted on 10.5.11: I saw the first half of Martin Scorsese‘s 208-minute George Harrison doc during the [2011] Telluride Film Festival, and was only somewhat impressed. It covered the first 23 or 24 years of Harrison’s life, or ’43 to ’69…and I felt I knew all that going in. But the second half, which I finally saw at a New York Film Festival screening, is highly nourishing and affecting and well worth anyone’s time.

Yes, even for guys like LexG who are sick to death of boomer-age filmmakers and film executives endlessly making movies about their youth. It’s reasonable to feel this way because boomers have been commercially fetishizing their ’60s and ’70s glory days for a long time. But George Harrison: Living In The Material World is nonetheless a very good film. Particularly Part Two.

Well, that’s not true, is it? At age 58 Harrison died of lung cancer, which he attributed to being a heavy smoker from the mid ’50s to late ’80s. And he wasn’t exactly the perfect boyfriend or husband. (There were a few infidelities during his marriage to Olivia Harrison.) And he wasn’t the perfect spiritual man either, despite all the songs and talk about chanting and clarity and oneness with Krishna. He had his bacchanalian periods. And he did so with the wonderful luxury of having many, many millions in the bank. It’s not like Harrison was struggling through awful moments of doubt and pain in the Garden of Gethsemane. 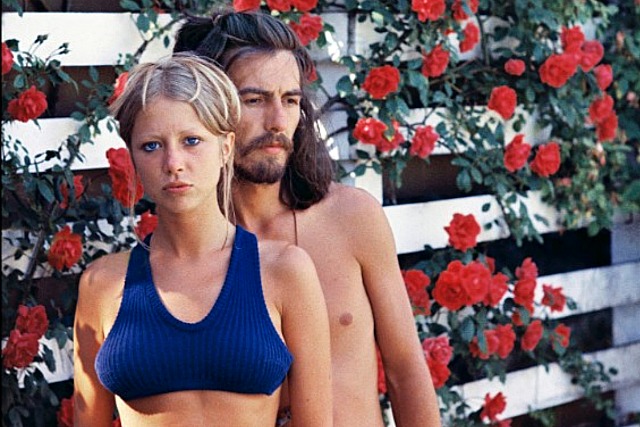 Part Two, as you might presume, is about Harrison’s solo career. It starts with the Beatles breakup, the making of All Things Must Pass, the 1971 Concert for Bangla Desh, etc. And then settles into the mid to late ’70s and ’80s, “So Sad”, “Crackerbox Palace,” Handmade Films, “Dark Horse,” the Travelling Willburys, the stabbing incident and so on.

Scorsese’s doc has no title cards, no narration, no through-line interview as Bob Dylan: No Direction Home had. As noted, I found Part One a little slipshod and patchworky at times. The editor is David Tedeschi, who also cut No Direction Home as well as Scorsese’s Public Speaking, the Fran Lebowitz doc, and Shine a Light, the 2008 Rolling Stones’ concert doc.

The AMPAS board of governors has voted to give agents the right to vote for Oscars. I for one believe that managers should also be allowed to vote. Agents and managers are as heavily invested in the industry as anyone else. Agents in particular are as sharp and eagle-eyed as members of the other branches, and are arguably more attuned to the shifting directions of the cultural winds. Come to think of it, shouldn’t this privilege also be afforded to elite industry journos? The Gold Derby gang, I mean. Talk about investment in the process and keeping a sharp eye…c’mon.

I’ve whitewater-rafted twice, once gratis and the second time for a not-too-painful fee. The freebie (thanks to the largesse of Universal Pictures) happened in Whitefish, Montana during a 1994 press junket for Curtis Hanson‘s The River Wild. The second occasion was a four-hour trek down the Schwarze Lütschine during a 2012 Switzerland vacation with Jett and Dylan. $150 each x 3 = $450 plus a tip for the raft commander.

I was thinking this morning about repeating the experience, perhaps on the Colorado River through the Grand Canyon later this summer. Easier imagined than done. For two people counting to-and-fro expenses plus air fare, hotel, meals and gas you’re looking at roughly between two and three grand. Three- to four-day camping treks are naturally a lot more. Almost every kind of adventure costs an arm and a leg these days. Even a three-day hiking visit to Yosemite and surrounded areas can do a fair amount of damage, especially if your wife or girlfriend is a luxury queen who doesn’t like roughing it at second-tier motels or campsites.

The bottom line is that Deliverance-type adventures cost more than you might think, and certainly enough to give pause to working stiffs trying to live within a reasonable budget. What did Jon Voight and Burt Reynolds pay those hillbillies to drive their cats to Aintree? $40 plus gas?