Donald and Melania will be okay, but this will obviously eliminate his campaigning for the foreseeable future. Didn’t he campaign in New Jersey today? A 14-day quarantine, but how long will a full recovery take? How long did it take Tom Hanks and Rita Wilson to get through the rough parts? I’m asking.

Don’t tell me he’ll get a sympathy surge out of this. Because my initial thought after the news broke was “could this be a ploy?” Trump has been semi-blase and certainly cavalier about the Covid threat all along. Oh, the irony.

Pres. Trump mocks Joe Biden on the issue of masks: “I don’t wear masks like him. Every time you see him, he’s got a mask. He could be speaking 200 feet away and he shows up with the biggest mask I’ve ever seen.” https://t.co/5Bl4Ob3O2t #Debates2020 pic.twitter.com/OA3ffVcrkg

Watch: This is Trump's full answer to @SeanHannity about Hope Hicks' diagnosis at 9:49pm last night. "She did test positive," he said. "I just heard about this." pic.twitter.com/vDCW8tN8yf 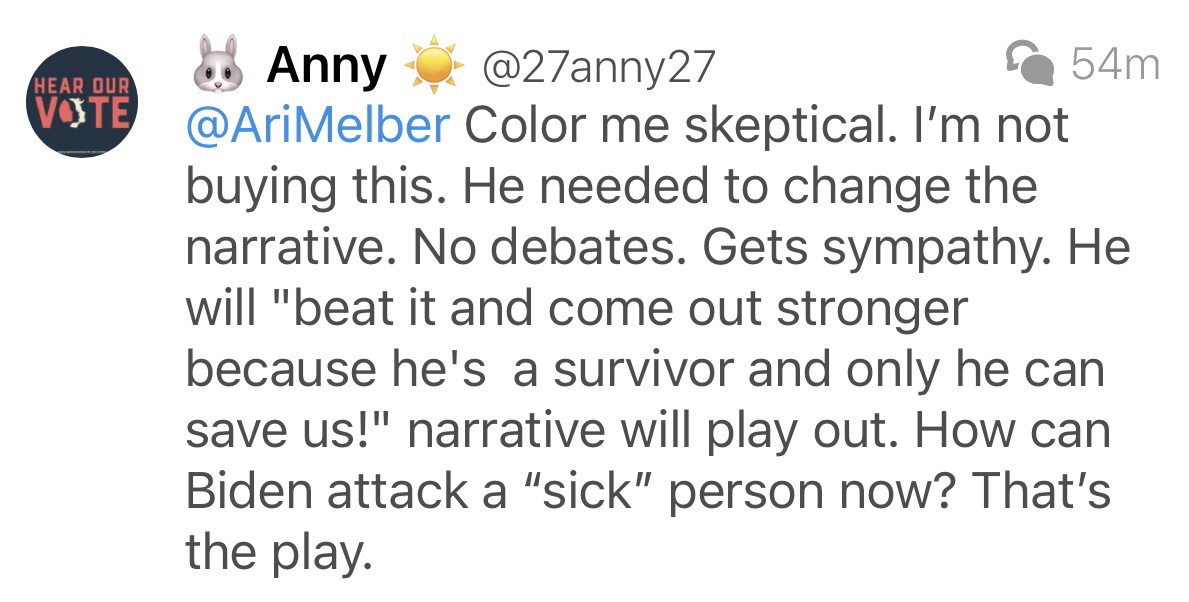 The instant I watched that Melania Trump video about encouraging healthy, drug-free lives and honoring National Substance Use Prevention Month, I was asking myself “what’s with the curiously provocative camera angle?” and more to the point “where have I seen this before?”

Usually PSA spots are delivered full face and straight to the camera, so the sultry side-angle thing felt like a distraction.

Then it hit me — that famous 1967 Noxzema shaving cream ad with Swedish model Gunilla Knutson (“Take it off, take it all off”).

On one hand Melania’s ad is a straightforward pitch about social responsibility and saving kids from drug-dependent lives, but on another it’s about her glistening blonde highlights, prominent cheekbones and feigned Mata Hari allure. Why work against the sober messaging with a fetching “look at me” attitude? 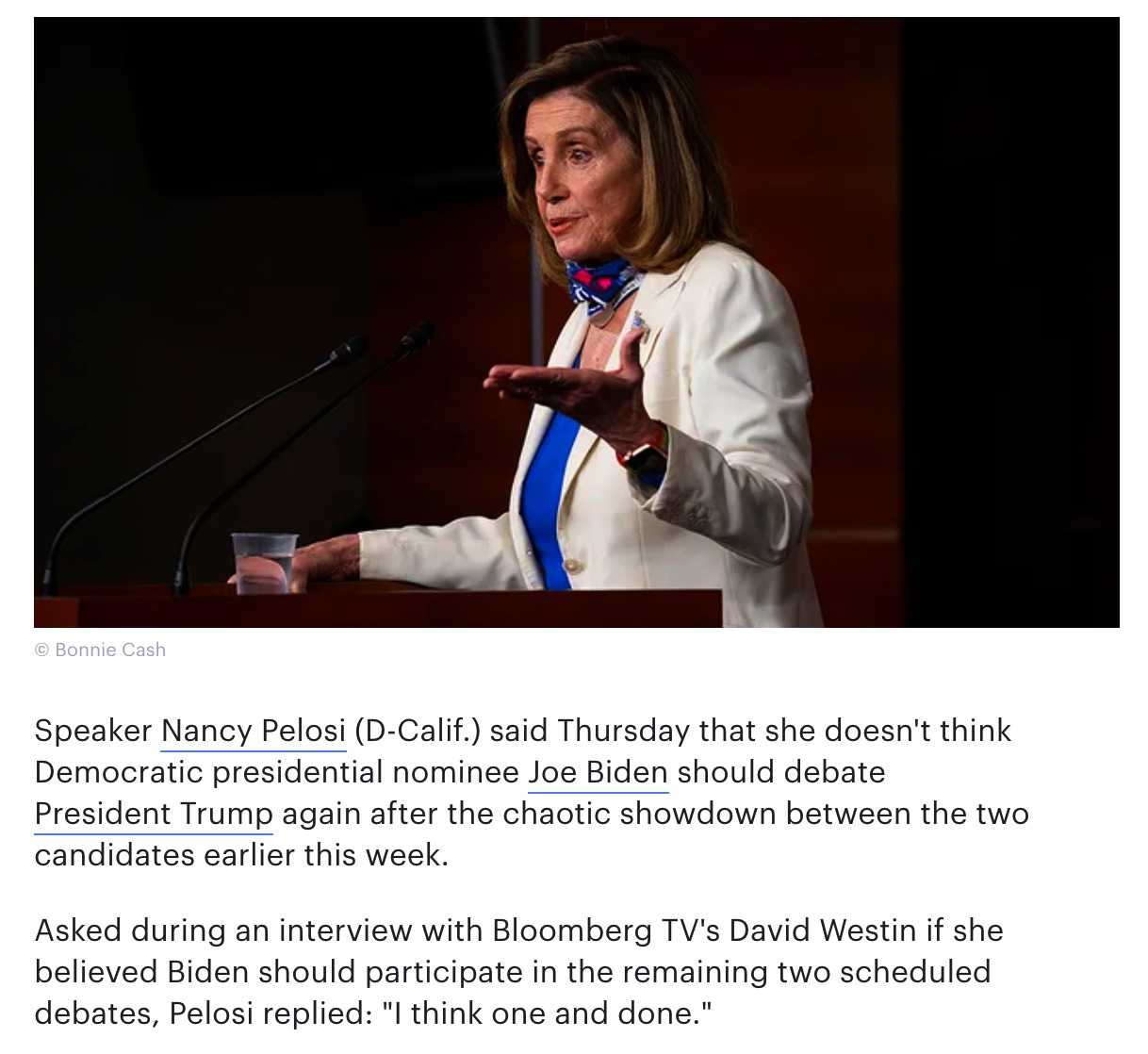 The below clips are similar. Both are about three or more cops interrogating a person they suspect of being a murderer. In police parlance they “like” the suspect. In both scenes the person of interest (a sleekly attractive blonde novelist, a bald factory worker in work boots and overalls) conveys a certain indifference to the currents of suspicion that the cops are clearly swimming in.

The difference is that Paul Verhoeven‘s direction in Basic Instinct tries to nudge or poke you into reacting — it’s unsubtle and “manipulative” (whip pans, extreme close-ups) and therefore less effective — while David Fincher‘s direction of the Zodiac interrogation scene is extremely delicate and almost imperceptible — you can feel the creepy tingly but without Fincher making any overt moves. It’s the difference between conventional and masterful.

In this time of terror, you can’t trust Sundance-approved, virtue-signalling critics on Lee Isaac Chung‘s Minari (A24, sometime in late October or early November). Well, you can but I wouldn’t. I’ve actually heard it’s pretty good, but for an honest take you have to wait for people like me to weigh in. Or seasoned critics like The Hollywood Reporter‘s Todd McCarthy.

Minari “is a modest pic but very human and accessible, and quite distinctively so in comparison to the vast majority of high-concept and/or violent movies rolling out today. The charming low-key humor and the actors are all winning without being coy or cutesy. Director writer Lee Isaac Chung has a light touch and a predilection for dry mirth, both of which serve him well here. Some significant new adversity — the last thing this family needs — provides an anchor for the third-act climax.” — from McCarthy’s 1.27.20 review.

A little less than a month ago Esquire‘s Nick Schager posted his choices for the 40 best films of 2020, most many of which struck me as highly unwarranted if not flat-out absurd. Josh Trank‘s Capone, Jean-Pierre and Luc Dardenne‘s respectable Young Ahmed, Corneliu Porumboiu‘s underwhelming The Whistlers, Leigh Whannell‘s respectable but wildly overpraised The Invisible Man, Andrew Patterson‘s Slamdance-level The Vast of Night, Kleber Mendonça Filho‘s ultra-violent Bacurau…c’mon!

A lot has changed over the last month. Here’s my rundown of 2020’s top 15, and in this order (I won’t be seeing Sofia Coppola‘s On The Rocks until next Monday):

2. Roman Polanski‘s J’Accuse (An Officer and a Spy): “Crafted with absolute surgical genius…a lucid, exacting and spot-on retelling of an infamous episode of racial prejudice…a sublime atmospheric and textural recapturing of 1890s ‘belle epoque’ Paris, and such a meticulous, hugely engrossing reconstruction of the Dreyfus affair…a tale told lucidly…clue by clue, layer by layer. Pretty much a perfect film. The fact that it can’t be seen in this country has no bearing whatsoever on the fact that it’s an absolutely brilliant film.” (Reviewed on 3.25.20.)

3. Aaron Sorkin‘s The Trial of the Chicago 7.

4. Florian Zeller‘s The Father (Sony Pictures Classics, 12.18.20 — saw it a week or two ago, completely floored ahd hugely impressed but haven’t written my review yet — Anthony Hopkins is an obvious Best Actor lock).

6. Judd Apatow and Pete Davidson‘s The King of Staten Island — the views of people who didn’t care for it as much I did are not “wrong” — they just don’t have big enough souls.

12. Gavin O’Connor and Ben Affleck‘s The Way Back.

The two Presidential candidates of 1960 were certainly better behaved and more dignified than Orange Plague was a couple of nights ago. Seriously, what a degradation in standards and values (spiritual, cultural) and it’s all on the boomers — the elitist greed of older urban liberals in the 21st Century and and especially the despair and nihilism of the bumblefuck boomers and GenXers.

Nixon would live another 34 years; Kennedy would be dead just over three years (roughly 38 months) hence.

Nixon’s sometimes decisive but often arch and paranoid presidency would end in disgrace in ’74, and yet he pushed for universal health care and established the Environmental Protection Agency.

Kennedy turned out to be a far less progressive president than his successor, Lyndon Johnson. His greatest moment was his mature and measured handling of the Cuban Missile Crisis; his achievements were more defined by a certain spirit and verve than concrete legislative advancements.

JFK would have sailed to victory over Barry Goldwater in ’64, but to achieve this he would have had to pledge to stop worldwide Communism whenever or however. His hand would’ve been subsequently forced in Vietnam — commit to a massive military investment or cut bait and let North Vietnam overrun the South. I’m having trouble imagining that he would have firmly stood up to the military-industrial complex and totally followed the advice of George Ball.

However you slice it the mid ’60s (SDS, Stokely Carmichael, burning cities, anti-establishment counterculture, anti-war protests) would have been a dispiriting ordeal for the nation’s 35th President. Fate saved him from all that, not to mention the dispiriting possibility of Nixon succeeding him in ’68.

I intended to post these Ma Rainey’s Black Bottom stills yesterday, but my energy waned.

They tell us that (1) Chadwick Boseman is greatly missed and (2) this 1920s-era film (“fateful recording session in 1927 Chicago, exploitation of black recording artists”) will deliver a certain poignant, painterly atmosphere by way of dp Tobias A. Schliessler (Patriot’s Day, The Taking of Pelham 123, Dreamgirls, Friday Night Lights).

The director is George C. Wolfe. Ruben Santiago-Hudson‘s screenplay is an adaptation of August Wilson’s 1982 play. Boseman aside, the costars are Viola Davis, Glynn Turman, Colman Domingo and Michael Potts. The Netflix film pops on 12.18. 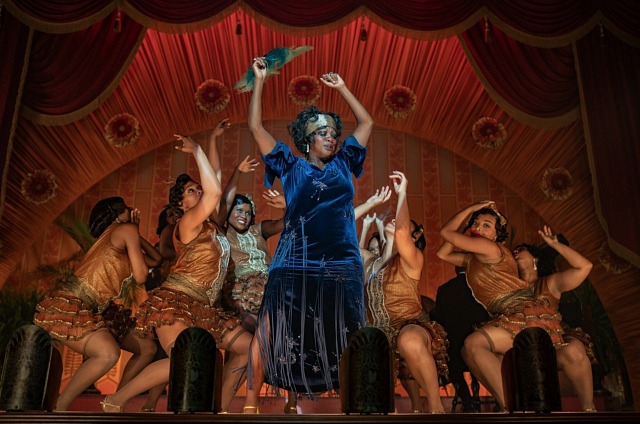 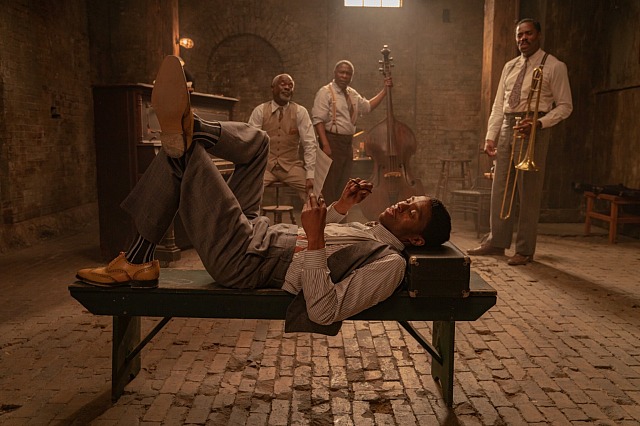 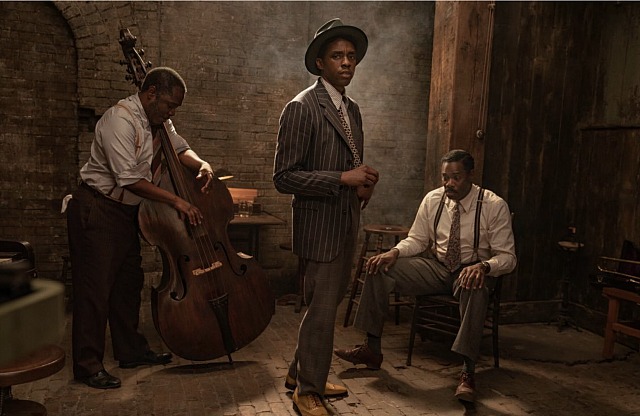