Support on Patreon Follow @wellshwood
12 Comments
Always Wanted To Own

Sitting atop my bedroom bureau, I mean. To my knowledge no go-getter has ever bought the rights and mass-produced for people like me.

Christ Unlimited, 1970 — created by Herman Makkink (1937-2013). Painted polyester and fiberglass sculptures of a naked, crucified Jesus dancing as if in a chorus line, numbered in red paint at the underside of each right foot 6 and 8 from the edition of 9, acquired by Stanley Kubrick for the 1971 Warner Bros. film A Clockwork Orange. 20 and 3/4 inches high. 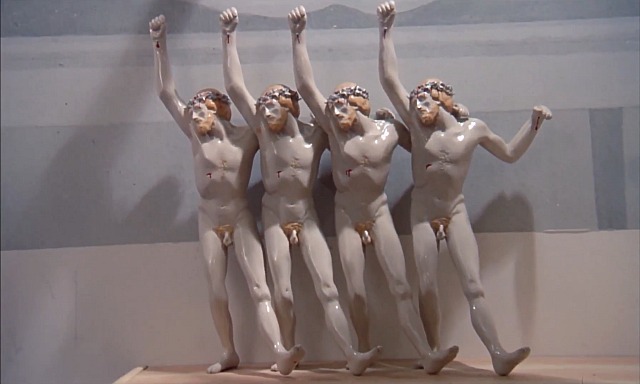 Key phrase: “The 1619 Project is a thesis in search of evidence, not the other way around.”

Final three paragraphs: “For obvious reasons, I’ve thought long and hard about the ethics of writing this essay. On the one hand, outside of exceptional circumstances, it’s bad practice to openly criticize the work of one’s colleagues. We bat for the same team and owe one another collegial respect.

“On the other, the 1619 Project has become, partly by its design and partly because of avoidable mistakes, a focal point of the kind of intense national debate that columnists are supposed to cover, and that is being widely written about outside The Times. To avoid writing about it on account of the first scruple is to be derelict in our responsibility toward the second.

“All the more so as journalists, in the United States and abroad, come under relentless political assault from critics who accuse us of being fake, biased, partisan and an arm of the radical left. Many of these attacks are baseless. Some of them are not. Through its overreach, the 1619 Project has given critics of The Times a gift.”

Select critics have been sent links to Ron Howard‘s Hillbilly Elegy (Netflix, sometime in November). Hollywood Elsewhere is looking very much forward to submitting to a cinematic rendering of J.D Vance’s 2016 memoir about growing up yokel. Seriously, no kidding, I’m into it.

We owe a debt of recognition, after all, to those fine rural people who voted for Donald Trump in ’16 and thereby pushed our country to the brink of totalitarian fascism. Most many of them are still wearing the red hat.

Vanessa Taylor‘s screenplay is actually about how Vance, portrayed as a teen by Owen Asztalos and as a young adult by Gabriel Basso, gradually escaped this horrid, dead-end culture and went on to attend Yale Law School and become a noted author.

HE to critic who’s seen it: “I have one question, [name]. How is Glenn Close‘s performance as Ma Bumblefuck?” (Her character is actually called “Mawmaw.”)

Yesterday an HE sorehead wrote that Florian Zeller‘s The Father (Sony Pictures Classics, 1.20.21) “isn’t happening. Or anything related to it. It’s another self-inflated bubble among movie pundits who will have no existence whatsoever in the real world.”

HE reply: “You’ve seen The Father? If you have you’re really crazy to have said that. It’s not a ‘bubble’ movie in the slightest. The idea of putting the audience into the shoes of an aging fellow with dementia is one of the most striking and inventive strategies for a domestic drama that I’ve seen in a long time. And Anthony Hopkins is nothing short of brilliant in the role. Everyone gets old and loses their edge to some extent. (Except for Gore Vidal, whom I spoke to a year or so before the end and seemed sharp as a tack.). And almost every family or middle-aged son or daughter has dealt with a declining parent. It’s about as un-bubbled and ‘real world’ a subject as you can find.”

Last night a former boozer wrote that “through the miracle of sobriety, I found my way back to the real world.” Good for him. Excellent. I know how he feels. However…

HE reply: “Speaking as someone eight and a half years sober, I can’t quite agree with calling it a ‘miracle.’ Because you did it one day at a time, and I’m 100% certain that the last time you looked in the mirror you didn’t say ‘man, you are one effing miracle of a human being!’ Nor is sobriety itself a miracle. It’s cleansing and liberating and wonderful in a kind of radiant rainbow way, but not quite (i.e., slightly shy of) miraculous. In the same way that anything involving will and focus and choosing life, good health and possibility over death, despair and the cocoon of ruin…it’s the only way to go, but I’ve been the recipient of serious, clear-light miracles in my life, and sobriety ain’t the same thing. It’s something to be proud about and grateful for but…well, I’ve said it.