The famous animal bone sequence in 2001: A Space Odyssey lasts one minute and 54 seconds. It shows the moment in which Moonwatcher (Dan Richter) discovers a certain killer instinct that will save his tribe from extinction.

My favorite part is the final six seconds, starting at 1:48. This is when Moonwatcher says “okay, that was cool, I now understand how to kill prey for food…and now that I’ve figured this out I’m going to throw the fucking bone in the air and forget about it.”

Which he does. And then he runs his fingers through the sand and starts…whatever, daydreaming. I love this part…”fuck it, fuck the bone, I’m not doing this all day, I’m taking a break.”

“For once do something good for the country, calm down your fucking loony hillbilly friends and tell them you lost the election and you’re going to help the transition. These loonies who follow you are all worked up…they think something was taken from them.” — Howard Stern‘s unsolicited advice for Donald Trump, shared during this morning’s (11.16) show.

Posted on 4.11.18: “50 years ago huge portions of this country were in love with the idea of Bobby Kennedy, the successor to the throne with the reedy voice and tousled hair and an affection for Greek poets. Even rural bumblefucks loved and admired him.

“But today the children of those legions are supporters of an animal — a corrupt, nostril-breathing, blatantly unhinged rightwing sociopath.

“Paul Schrader has noted that it wasn’t just movies of the ’60s and ’70s that were better, but that moviegoers were better also. Same thing with the voters. 30% to 35% of the voters in this country (fewer?) are nihilistic and dangerous.”

Alan Pakula‘s The Parallax View (’74) would have been a far less effective film. I re-watched the Vudu HDX version a couple of nights ago, and it looks beautiful. There’s no way the Criterion Bluray will significantly improve upon it.

What can R.J. Cutler‘s Belushi (Showtime, 11.22) possibly add to what we already know about the late genius-level comedian, whose wanton drug-taking led to his premature death in March ’82?

Belushi’s glory days were between ’72 and mid ’78 — from the time he joined National Lampoon’s Lemmings and then became writer, director and actor for The National Lampoon Radio Hour, to the first three and a half years with SNL (starting in ‘mid 75) and his breakout performance in Animal House. It was mostly cocaine and downswirl after that.

After Animal House, the best film Belushi ever made was Continental Divide (’81).

I somehow missed the fact that Cathy Smith, the backup singer, groupie and drug dealer who injected the coke-heroin speedball that killed Belushi on 3.5.82, died three months ago (8.16.20). She was 73.

Before today I hadn’t paid the slightest amount of attention to Harry Styles since catching his performance in Chris Nolan‘s Dunkirk, or roughly three and one-third years ago.

He was totally fine in that excellent World War II film, but I have to be blunt and say that Styles seems vaguely appalling in some of the photos in a new Vogue profile, which includes a first-ever cover featuring a dude. Possibly because Anna Wintour was intrigued and excited by photos of Styles in dresses and hoop skirts and whatnot.

Can the “d” word even be used to describe Styles after this? Unless you want “d” to stand for douche? A year ago he was quoted saying that he’s not “just sprinkling in sexual ambiguity to be interesting.” Well, he coulda fooled me. 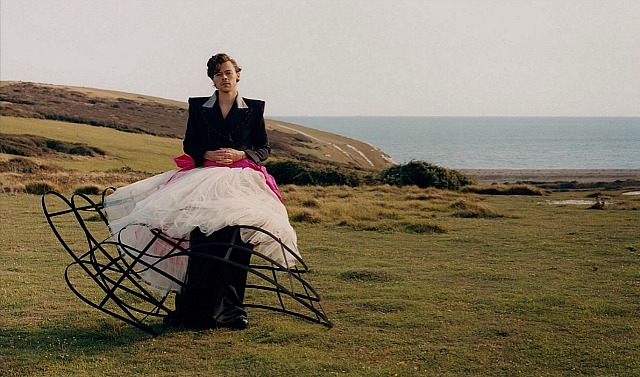 My first reaction was “okay, artists are expected to test standards and push the envelope, and in this regard Styles is doing the good old X-factor thing or, if you will, trying out a ‘Mothers of Invention in early ’68‘ approach or a ‘David Bowie and Mick Jagger in the early ’70s’ thing…free to explore whatever, not hung up on conventions.”

My second reaction was “Jesus, talk about rotten timing…nobody wants to see Styles in a dress right now…please.”

I’m a staunch, rumblehog-riding metrosexual who’s been to Prague twice for micro-hair-plug surgery and who’s long had an affection for J. Crew cold-weather scarves and Italian suede lace-ups and Beatle boot velcro slip-ons. But with Trump receding, Biden ascending and sensible, left-center practical thinkers starting to push back against wokester tyranny in certain corners of the culture, especially in the immediate wake of severe electoral setbacks for wokester-shithead progressives…nobody wants to see Harry fucking Styles in a dress. Not now, they don’t.

Gene Wilder to Zero Mostel in The Producers: “Max, he’s wearing a dress.”

I have a place in my head for flirting with half-feminine stylings. I have broad shoulders but I’m not a manly man. I worked as a tree surgeon in my early 20s, but I never feigned any kind of rugged machismo. I once called AAA to change a flat tire in Brooklyn, for Chrissake, and the idea of motor oil getting smeared on my hands strikes me as abhorrent. But this is the wrong time in the life of the planet for Styles to be modelling dresses in Vogue. Trust me, it just is. 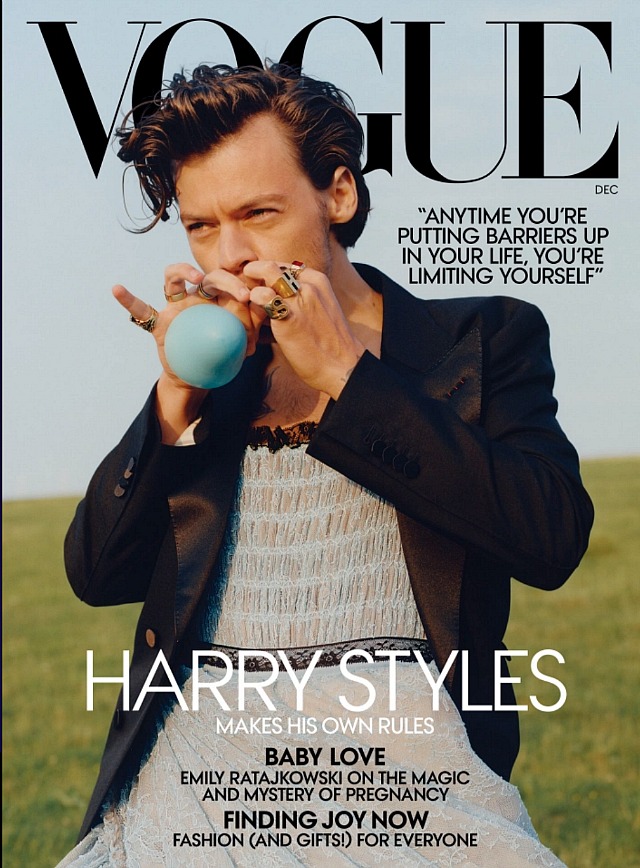 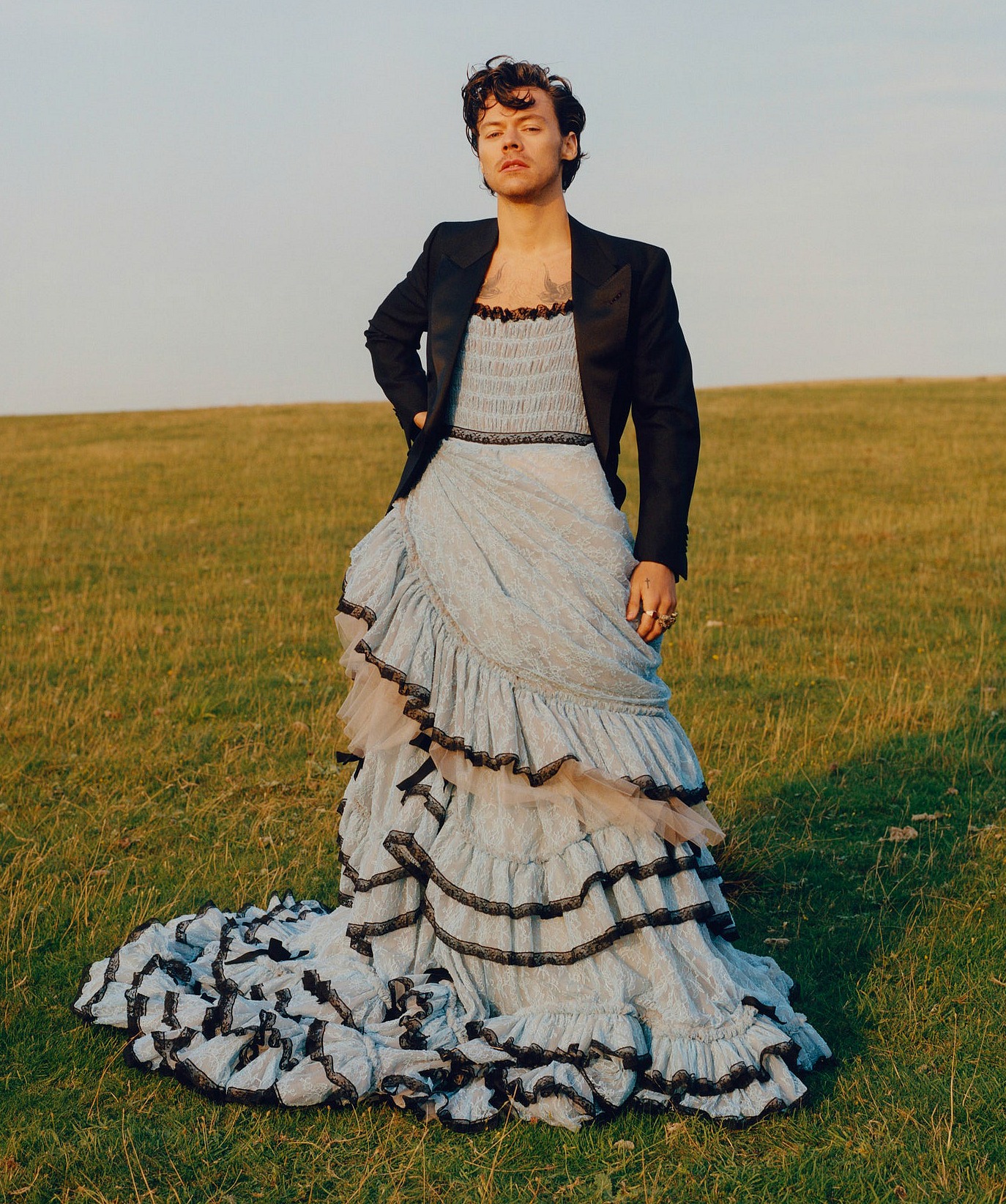 Steven Soderbergh‘s Let Them Eat Cake All Talk (HBO Max, 12.10) is about…? Meryl Streep grappling with writer’s block while crossing the gray, choppy Atlantic? It certainly seems to be about spritzy dialogue. Boilerplate: “An author goes on a trip with her friends and nephew in an effort to find fun and come to terms with her past”. Costarring Gemma Chan, Candice Bergen, Dianne Wiest and Lucas Hedges.

Thank you, drooling American morons of the heartland…thank you for your mule-headed determination to contaminate this country like never before…brilliant.