Our brief national convulsion over Bruce Willis‘ mask-averse behavior at a West Hollywood Rite-Aid two days ago has mercifully come to an end. It is now time to move on and focus our attention on the House of Representatives’ impeachment vote. 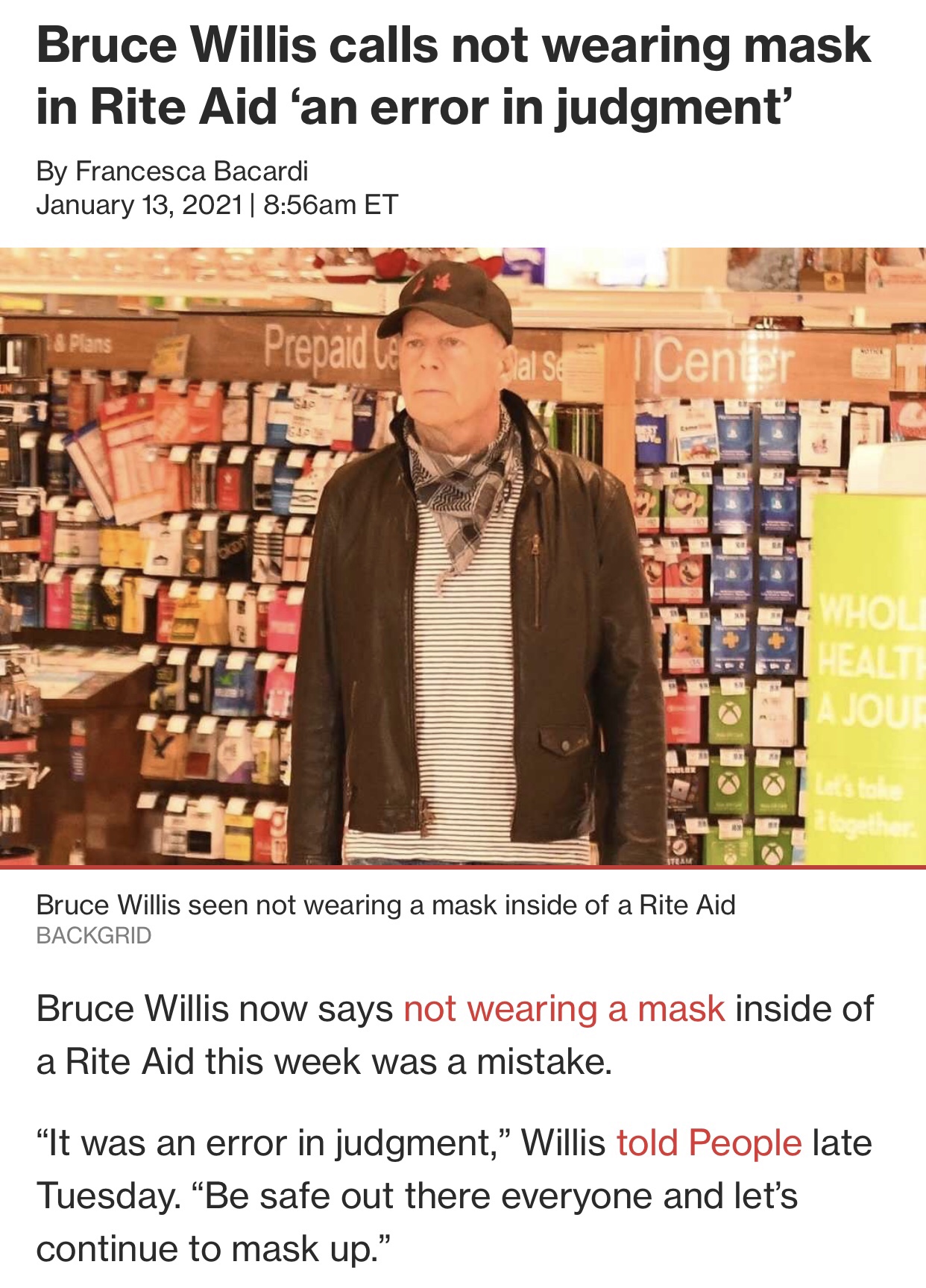 Tuesday, 1.12, “Rite–Aid Mask Rebel“: [On Monday, 1.11] Bruce Willis showed those Rite-Aid bitches who the daddy is and how to stand your ground when it comes to mask refusal.

Willis actually roamed his ground while declining to pull his bandana up around his nose, and then he thought better of it and left the Rite-Aid like a man, striding out proud and tall.

I’m presuming that the altercation happened at the Rite-Aid at the SW corner of Fairfax and Sunset. I’ve been there many times so don’t tell me. When the employees tell a customer to mask up, they mean what they say and say what they mean.

But Willis apparently wasn’t in the mood to hear it, and so…well, nobody knows if he replied with actual words but his actions clearly said “you don’t tell me to mask up…you tell others maybe, but not me.”

Senate Majority Leader Mitch McConnell, easily the most evil and cold-blooded Republican in the Senate, and Rep. Kevin McCarthy, the most rabid and conniving Republican dog in the House, are both talking about throwing Donald Trump under the bus, according to N.Y. Times reporter Maggie Haberman.

Excerpt: “Senator Mitch McConnell, the Republican leader, has told associates that he believes President Trump committed impeachable offenses and that he is pleased that Democrats are moving to impeach him, believing that it will make it easier to purge him from the party, according to people familiar with his thinking. The House is voting on Wednesday to formally charge Mr. Trump with inciting violence against the country.

“At the same time, Representative Kevin McCarthy of California, the minority leader and one of Mr. Trump’s most steadfast allies in Congress, has asked other Republicans whether he should call on Mr. Trump to resign in the aftermath of the riot at the Capitol last week, according to three Republican officials briefed on the conversations.

“While Mr. McCarthy has said he is personally opposed to impeachment, he and other party leaders have decided not to formally lobby Republicans to vote ‘no,’ and an aide to Mr. McCarthy said he was open to a measure censuring Mr. Trump for his conduct. In private, Mr. McCarthy reached out to a leading House Democrat to see if the chamber would be willing to pursue a censure vote, though Speaker Nancy Pelosi has ruled it out.

“Taken together, the stances of Congress’s two top Republicans — neither of whom has said publicly that Mr. Trump should resign or be impeached — reflected the politically fraught and fast-moving nature of the crisis that the party faces in the wake of last week’s assault by a pro-Trump mob during a session to formalize President-elect Joseph R. Biden Jr.’s electoral victory.” 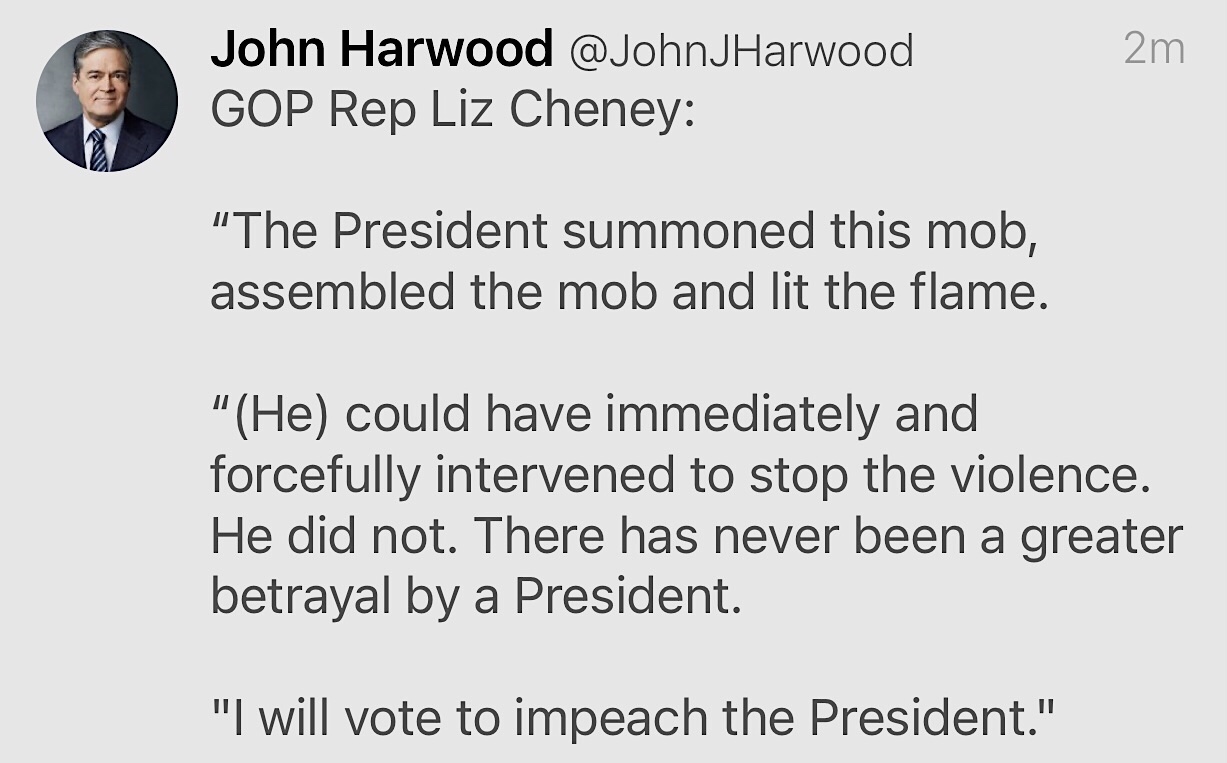 HBO should have cleared the decks in order to get Real Time with Bill Maher on the air last Friday, a week ahead of schedule. Two days after the Capitol insurrection, there was a dire need for the usual let-it-all-hang-out…the frank acknowledgments and deep-dive inquiries that Maher always tries to provide. In any event this Friday’s debut episode (1.15) should be…well, who knows. But given what’s happening right now, it’s not crazy to expect a “humdinger” of some kind.

10 Comments
A Nightmare on Obesity Street 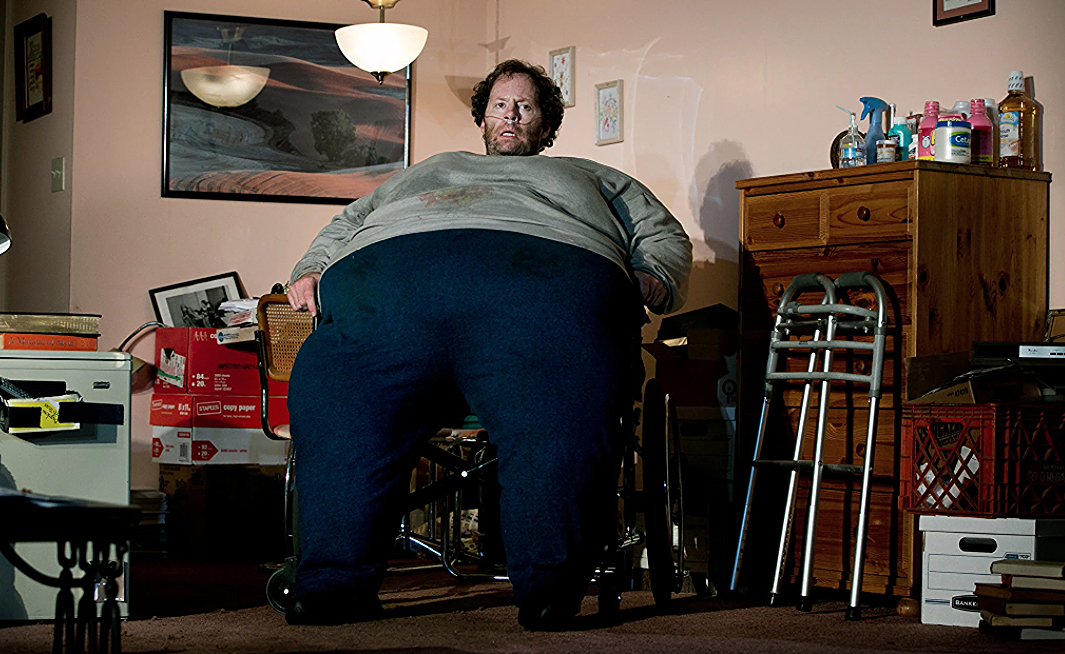 I was initially suspicious about Shaka King‘s Judas and the Black Messiah (Warner Bros., 2.12), a period drama about late ’60s Black Panther activist and firebrand Fred Hampton, who was murdered by the FBI in December ’69.

One thing I didn’t care for was the on-the-nose title. The Chicago-based Hampton, 21 at the time of his death, cared a great deal about revolutionary social change, but there was nothing messianic about the guy — he was just a dedicated, no-bullshit leader of the Illinois branch.

Secondly I didn’t trust the early award-season enthusiasm shared by Variety‘s Clayton Davis, especially given his Awards Circuit ties to Keith Lucas, who co-authored early drafts of the Messiah script (and who shares a story credit with his brother Kenny)

Then I saw Judas and the Black Messiah a couple of weeks ago, and right away I found myself trusting — believing in — the ’70s milieu and the unforced, matter-of-fact, Sidney Lumet-ish mood of the thing. King isn’t trying to make a 2020 BLM version of what happened in Chicago 51 years ago, but attempting to show the way things actually were. He’s really dug into the history and the climate.

I was especially struck by the fact that Judas and the Black Messiah is only partly an attempted deification of Daniel Kaluuya‘s Hampton, although a valiant effort is made to sell Hampton as a charismatic, sexy-eyed hardcore. The surprise is that LaKeith Stanfield‘s portrayal of the real-life William O’Neal, a guilty, haunted FBI snitch who ratted Hampton out and wound up committing suicide at age 51, is a far more fascinating figure.

Kaluuya is fine as far as Hampton is written, but Stanfield owns this film. The twitchy O’Neal is oddly more affecting because he’s a jittery, two-faced rat in a cage, and on some strange level your heart goes out to the poor fucker. He’s Gypo Nolan in The Informer but without the boozy bellowing.

All through the film you’re muttering “stand up, save yourself, don’t do this, stand with your own,” and there’s something about O’Neal’s failure to do this combined with that look of trepidation in his eyes….it’s not that he’s “sympathetic” (far from it) but his dodgy personality and the pressures upon him constitute a more interesting character.

So I’m sorry but the smartest SAG + Oscar play isn’t a Best Actor push for Kaluuya (although there’s no harm in trying) but a Best Actor or Best Supporting Actor nomination for Stanfield. If Victor MacLaglen could win Best Actor for The Informer, Stanfield should be an easy pocket drop, especially considering that his performance is far more complex than McLaglen’s.

A friend says he “isn’t as high on it” as I am. “There have been so many movies like it before (Donnie Brasco, American Gangster) and the betrayal aspect also reminded me of White Heat, but the performances are excellent (especially Stanfield) and Bobbit’s photography should get nominated.”

Obstinate to the last, his own wavelength, radio signals from the dwarf planet Pluto, etc.

42 Comments
Fine With Me