Will Smith and Reinaldo Marcus Greene‘s King Richard (Warner Bros./HBO Max) is effing aces, and Smith will obviously be Best Actor-nominated and almost certainly win. I’m sorry but that’s simply the truth of it — the man has hit a grand slam.

It’s not just a first-rate sports drama (the story of how Richard Williams launched his tennis star daughters Venus and Serena Williams in their teen years) but a supremely effective, crowd-pleasing, character-driven “fall movie” — you know, those things they used to make for award season and that people would go to see in theatres and root for in terms of potential Oscar triumphs?

I was sitting there in a state of near-amazement and muttering “wow, this is so great and so unusual for this day and age…a first-rate, phenomenally well acted, sagely written, smartly edited, adult-angled film that isn’t infantile or depressing or diseased and is not just engrossing but rousing on a spiritual and emotional level…whatever happened to movies like this? Because corporate Hollywood has all but stopped making them.

There will be no King Richard haters…trust me. It radiates the right kind of vibes…the kind everyone wants.

…if this is in fact true.

Joe Wright and Erica Schmidt‘s Cyrano (UA Releasing, 12.31) had its first-anywhere screening Thursday night at the Palm, and when it ended around 9:25 pm a few things were obvious.

First and foremost, this poignant romantic tale about unrequited love “works,” and that the audience (composed of the usual mixture of press people and wealthy Colorado liberals) was deeply moved.

There was a kind of a hush outside the theatre — people were talking in groups, whispering praise, sifting through their emotions. (Me included.) Cyrano will probably do well with the Rotten Tomatoes and Metacritic gang, but it will surely become a hit or at least develop an ardent following among ticket-buyers and streamers. Because it gets people where they live…soul, passion, exquisite ache.

I’ve been watching filmed adaptations of Edmund Rostand‘s Cyrano de Bergerac for decades (Jose Ferrer‘s 1950 version, Steve Martin‘s Roxanne, the 1990 Gerard Depardieu version, Michael Lehmann‘s The Truth About Cats and Dogs) and the newbie — an inventively choreographed musical, fortified by first-rate production design and wonderfully lighted cinematography — is arguably the most spiritually and poetically buoyant version of them all.

The acting is top-tier, the musical numbers are arresting, the dialogue is as good as this sort of thing gets, and it’s a truly authentic time-tunnel experience (except for the “presentism” in the casting, which is par for the course these days).

Peter Dinklage has absolutely hit the jackpot with his titular performance — he’ll definitely be Best Actor-nominated. The film will almost certainly end up being Best Picture-nominated, and I wouldn’t be surprised if the year-end consensus is that Cyrano is a “better” musical than Steven Spielberg‘s West Side Story and Jon Chu‘s In The Heights combined.

Based on Schmidt’s 2018 stage musical of the same name (in which Dinklage and Haley Bennett costarred before moving onto the film version), Cyrano is easily Wright’s best film since Anna Karenina. Seamus McGarvey‘s exquisite cinematography reminded me of David Watkins‘ lensing of Richard Lester‘s The Three Musketeers (’73) — it’s a real trip just to watch and sink into on a visual level alone.

I have to get up early so that’s that. Four films — Belfast, The Velvet Underground, The French Dispatch, King Richard — slated for tomorrow. I might even fit in a fifth — Speer Goes to Hollywood at 1 pm.

Tatiana and I just saw Encounter with Riz Ahmed — a reasonably effective action melodrama / road movie about an unstable dad (Ahmed) kidnapping his kids, getting into gunfights and car thievery — everything is violent and anxious except for the very end.

No one’s idea of a “Telluride flick” — a lot of it feels rote, familiar…the old PTSD blues. (With insects.). I didn’t care for the over-reliance on extreme close-ups and the high-impact sound editing.

The actor who portrays Ahmed’s older son is especially good.

For me, Ridley Scott‘s Prometheus was a hate watch — easily earning a slot on my “ten most despised films of the 21st Century” list. There have been many, many films released over the last 20 and 2/3 years that I didn’t care for or couldn’t muster interest in, but which I half-respected or could shrug my shoulders h. But from the moment when I first recoiled in horror when I realized that Michael Fassbender was wearing “space mandals” in the opening scene…well, I’ve said it.

I was therefore taken aback when I read Dom Nero‘s “It’s Time To Redeem Prometheus,” which appears in the 9.1 edition of Esquire. He calls it a “masterpiece,” in fact.

From “I Remember Prometheus,” posted on 10.5.12: “In my mind, Prometheus happened so long ago it doesn’t even feel like it came out this year. I saw it in Prague on a rainy afternoon. Mostly I remember the humidity and how warm it was in the lobby as all the journos and media people stood around and waited for the doors to open. And how I was sweating under my baseball cap and shades. And then wondering why the projectionist was showing it in 1.85 and not 2.35. And then trying to make sense of it…and failing.

“Prometheus is visually striking, spiritually frigid, emotionally unengaging, at times intriguing but never fascinating. It’s technically impressive, of course — what else would you expect from an expensive Scott sci-fier? And the scary stuff takes hold in the final third. But it delivers an unsatisfying story that leaves you…uhm, cold.

“It’s a gray, forbidding film about howling winds and chilly people. It’s a watchable, well made, at times better-than-decent ride, but it really doesn’t hang together. I’m sorry but anyone who says ‘wow, this is really great!’ is just full of it. But there’s no way to kick this around without dropping all kinds of spoilers so I’m going to keep things vague.:”

“Most ticket-buyers will go looking for a standard alien flick and come away going ‘hmm, I dunno but this isn’t quite it.’”

Earlier this evening I spoke to a friend who’s seen Jane Campion‘s The Power of the Dog (Netflix, 11.17), and he said “it’s longish but I loved it.” On the other hand some are tracking mixed reactions out of Venice. The first Telluride screening is on Saturday at 7 pm. I don’t mean to mix animal metaphors, but let’s hold our horses for three days. Okay, until the Venice reviews break. 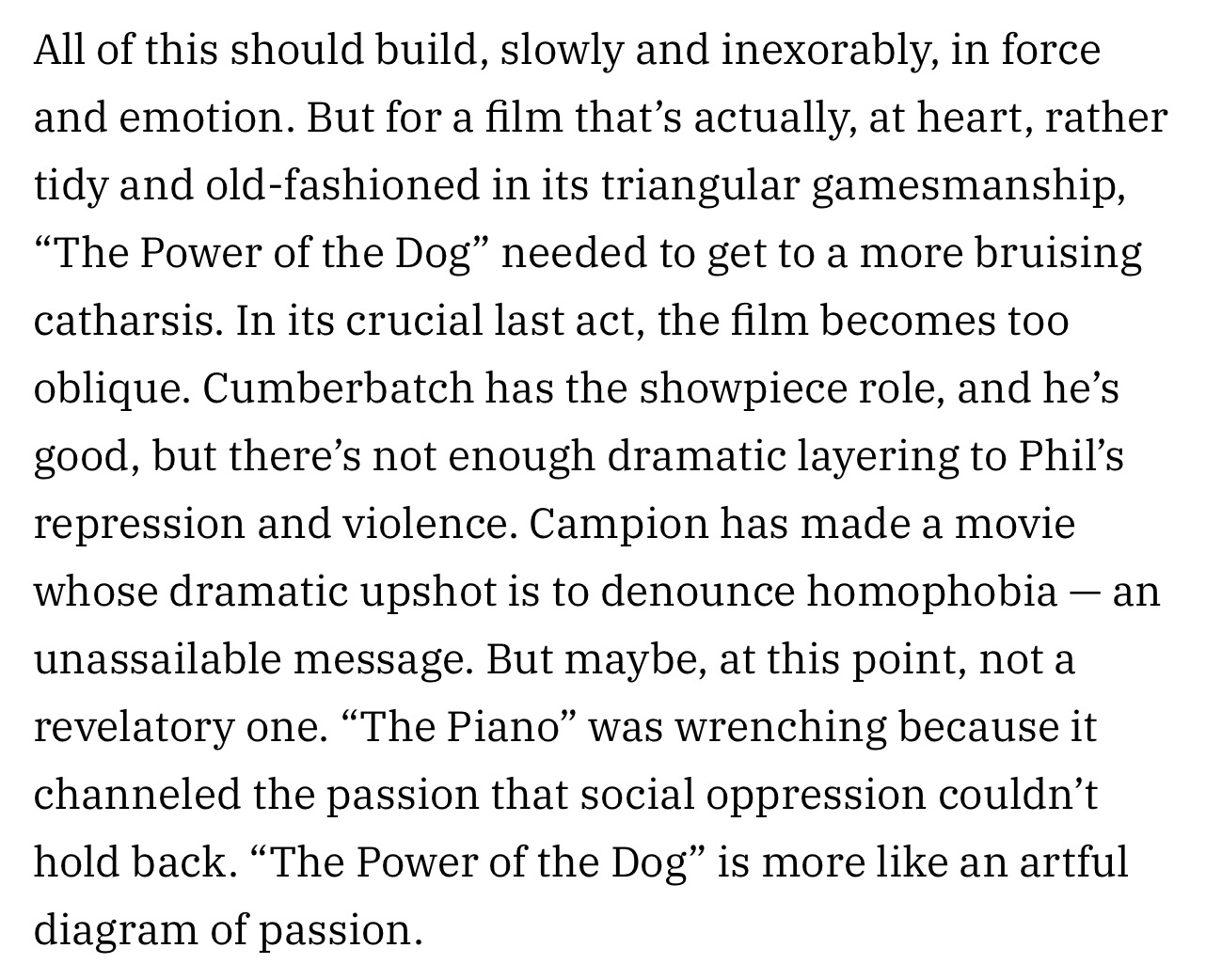 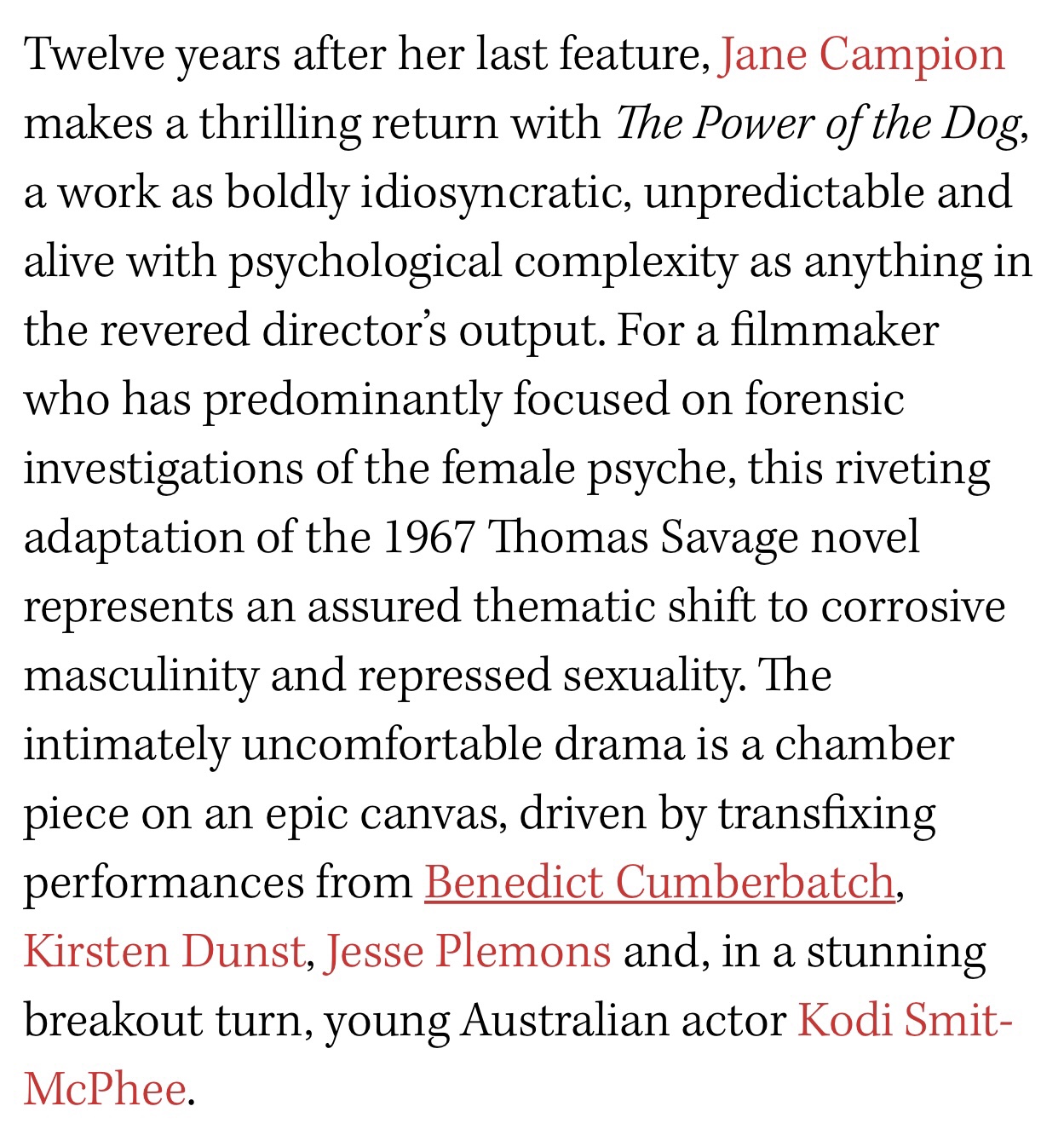 After picking up our passes and buying some groceries, we checked into our spacious Airbnb rental at 26 Deep Creek Road (a little past the notorious Telluride airport)…unpacked, showered, learned the ins and outs, plugged everything in, etc. We went back to town around 7 pm, roamed around and hit La Marmotte for a nice pricey dinner and a slightly premature celebration of Tatiana’s birthday.

Our first encounter was with Picturehouse CEO Bob Berney and wife/partner/marketing hotshot Jeanne Berney about Liz Garbus‘s Becoming Cousteau, a Telluride attraction that Picturehouse is distributing. We then chatted with Santa Barbara Film Festival honcho Roger Durling and partner Daniel Launspach, who just happened to stroll in as we were being seated — they sat down about 12 feet away. When Awards Daily‘s Sasha Stone and critic Clarence Moye dropped by to say hello, Durling strolled over and said, “This is starting to feel like dangerous liasons.”

Have I stated lately that Durling and Launspach are excellent human beings, large of heart and spirit? No getting around that, I’m afraid.

Weather permitting, we’ll be hitting the outdoor Telluride brunch around 10 am or thereabouts. Then comes the usual press orientation schmooze at the Werner Herzog theatre at 1:30 pm, followed by a secret Patron’s screening at 2:30 pm. (I’ve heard it might be Wes Anderson‘s The French Dispatch.) Then comes a 6:30 pm screening of Joe Wright‘s Cyrano plus a Peter Dinklage tribute. Finally at 9:30 pm will be a screening of Sean Baker‘s Red Rocket. 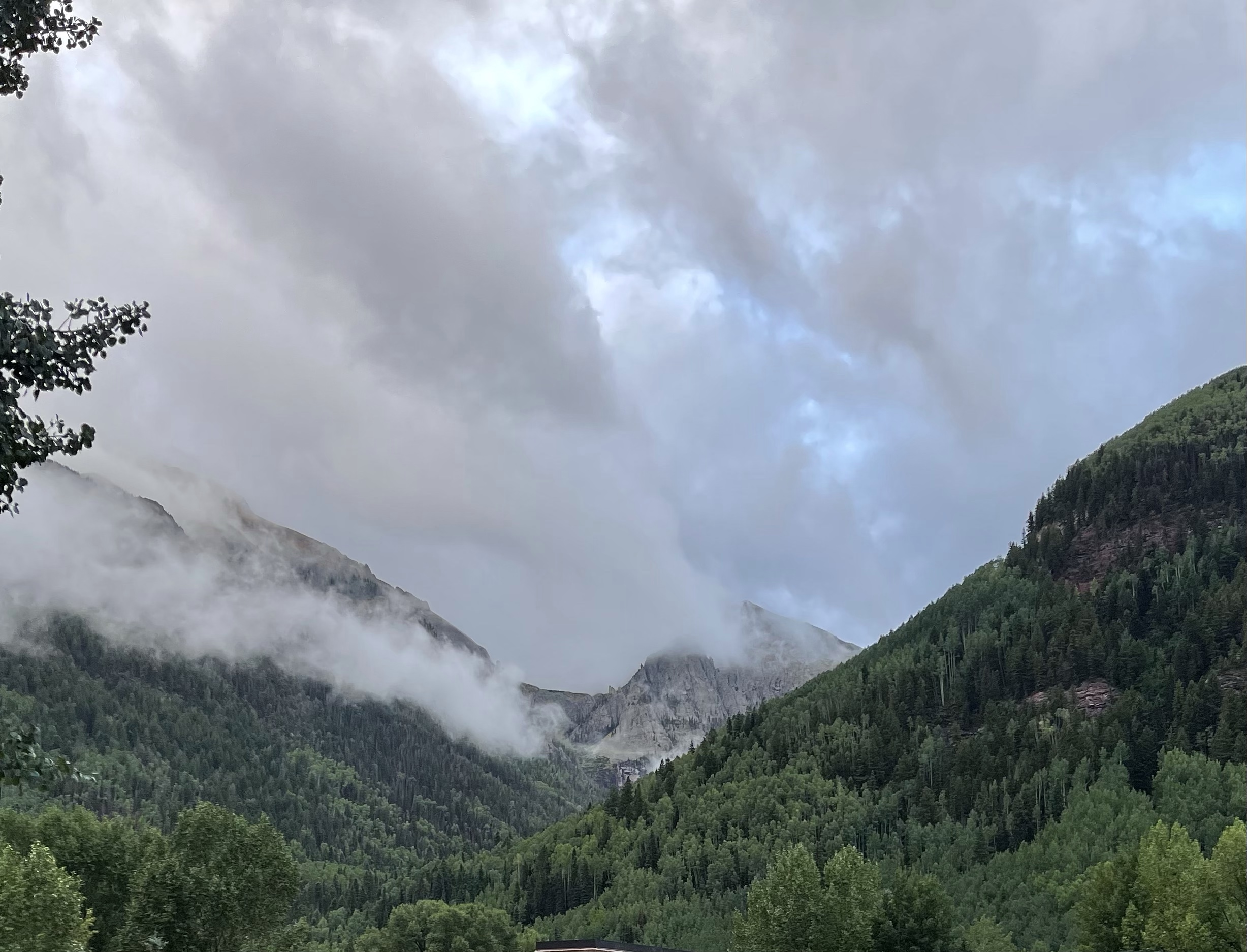 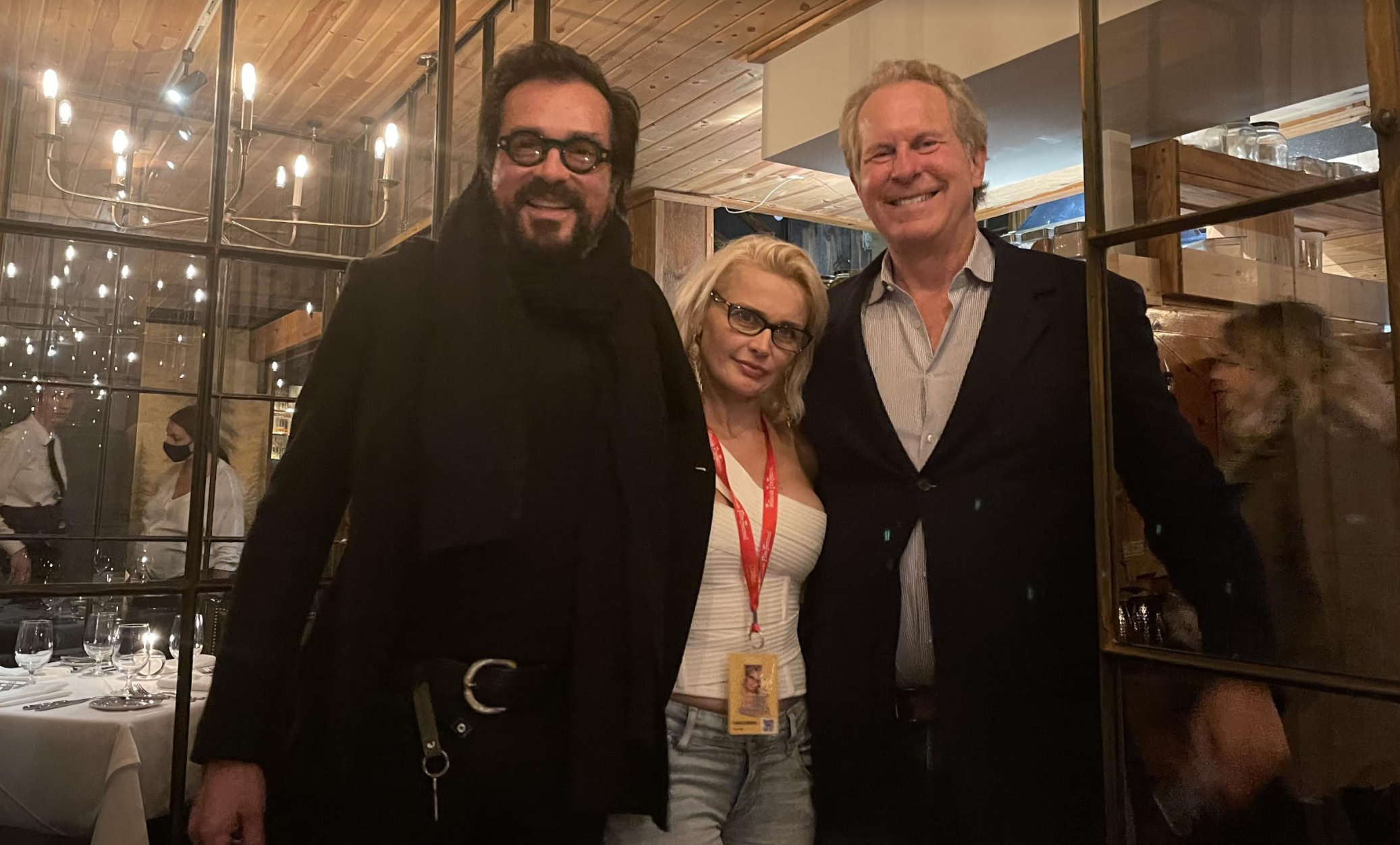 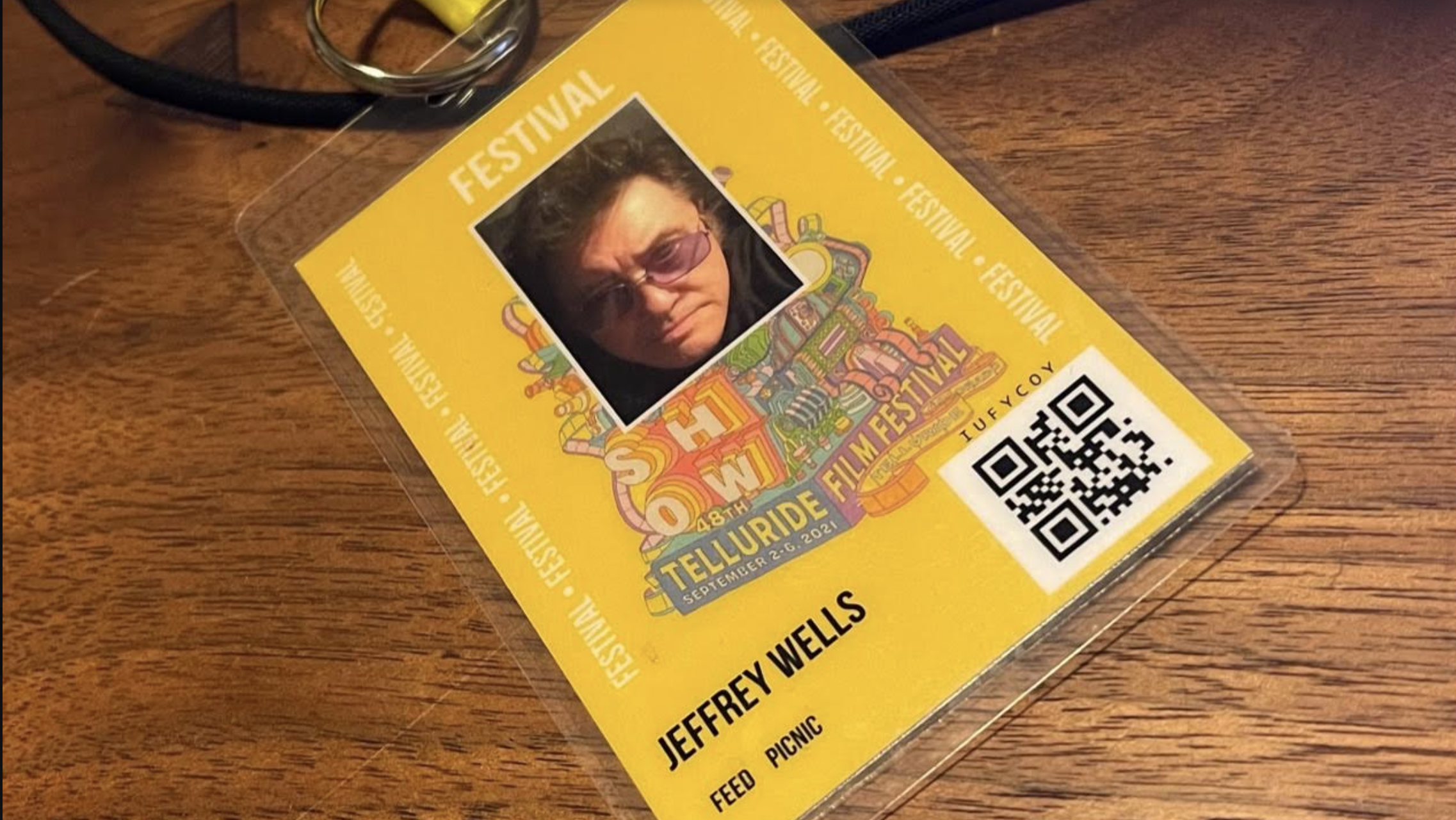 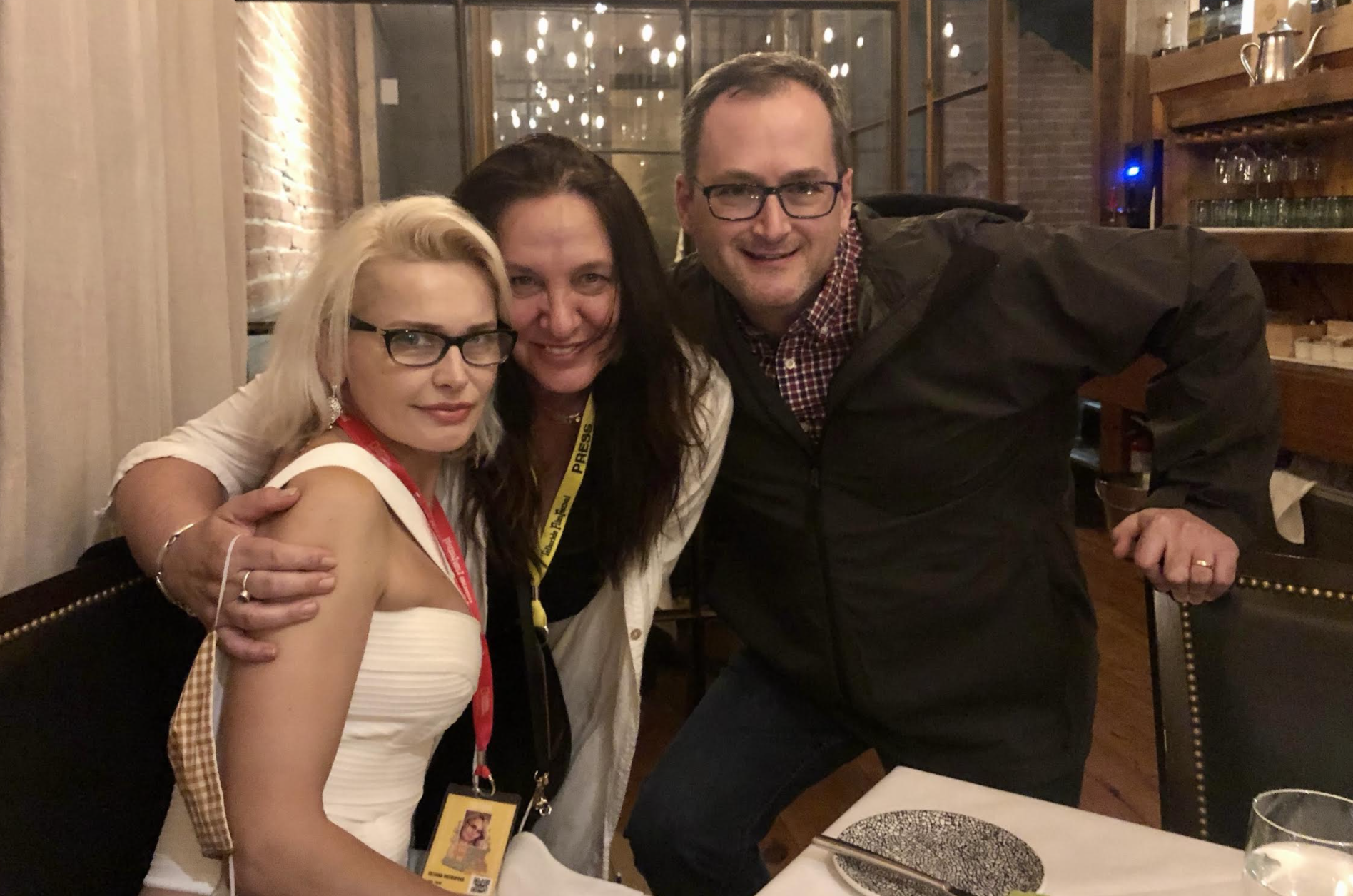 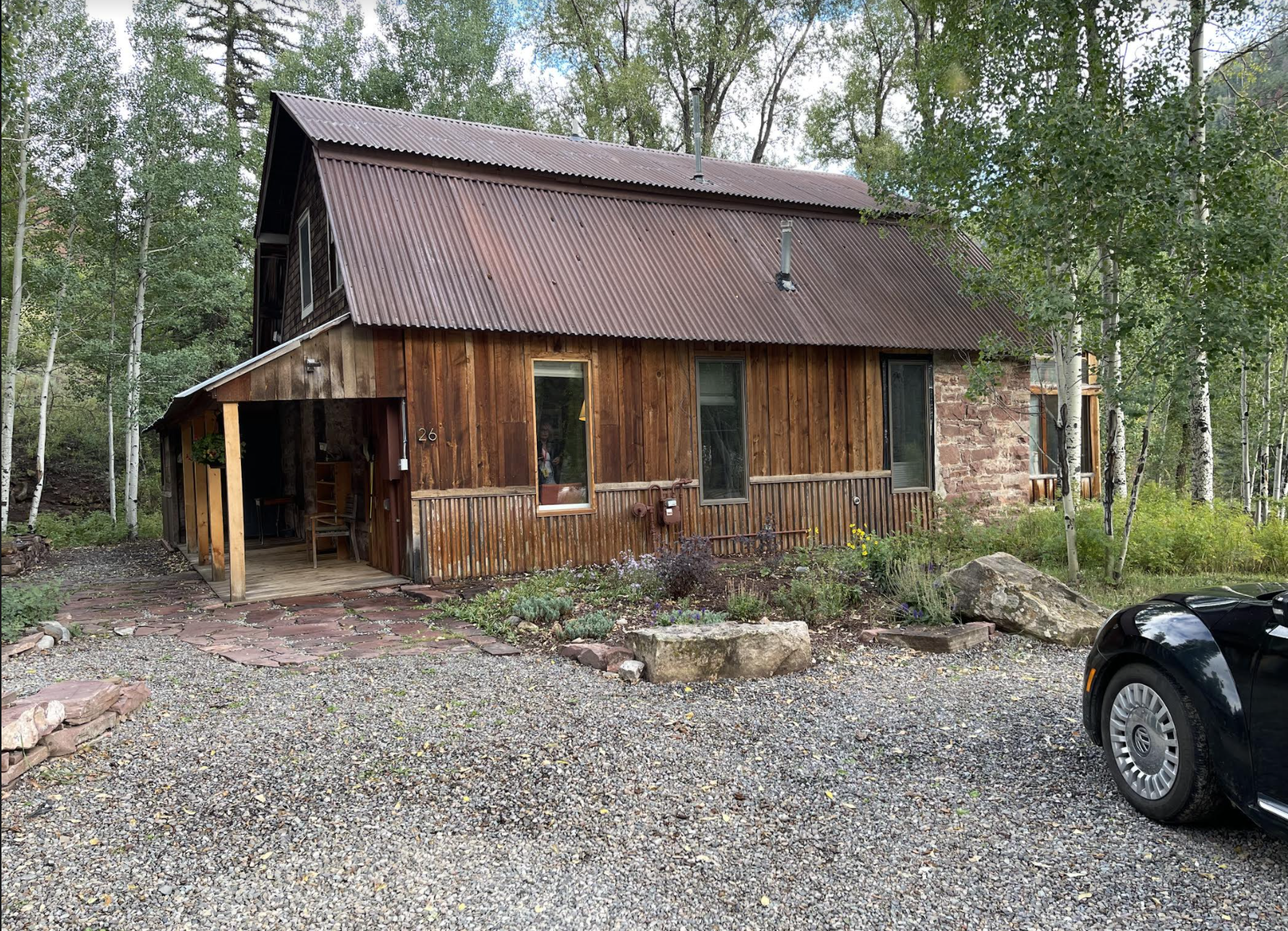 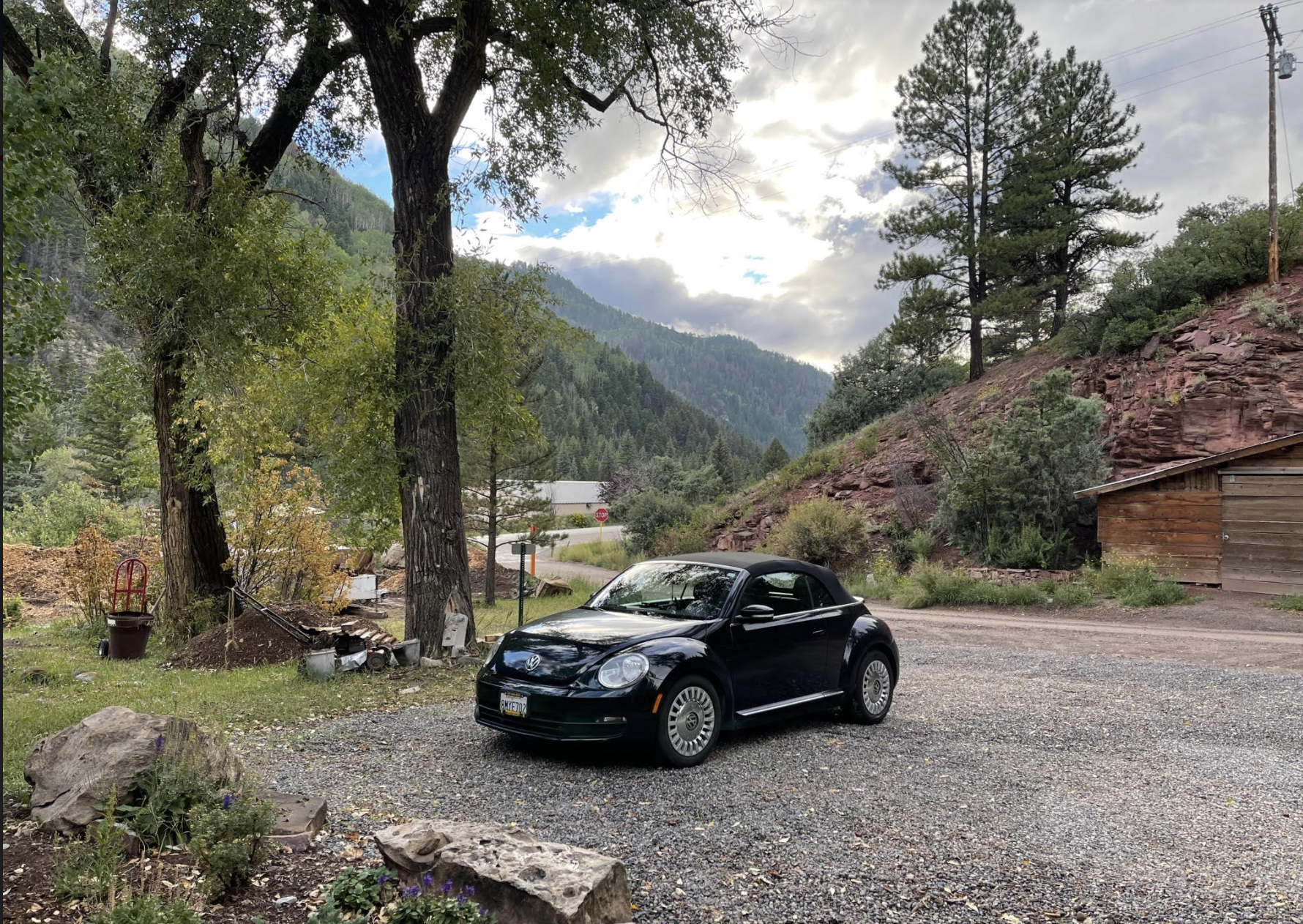 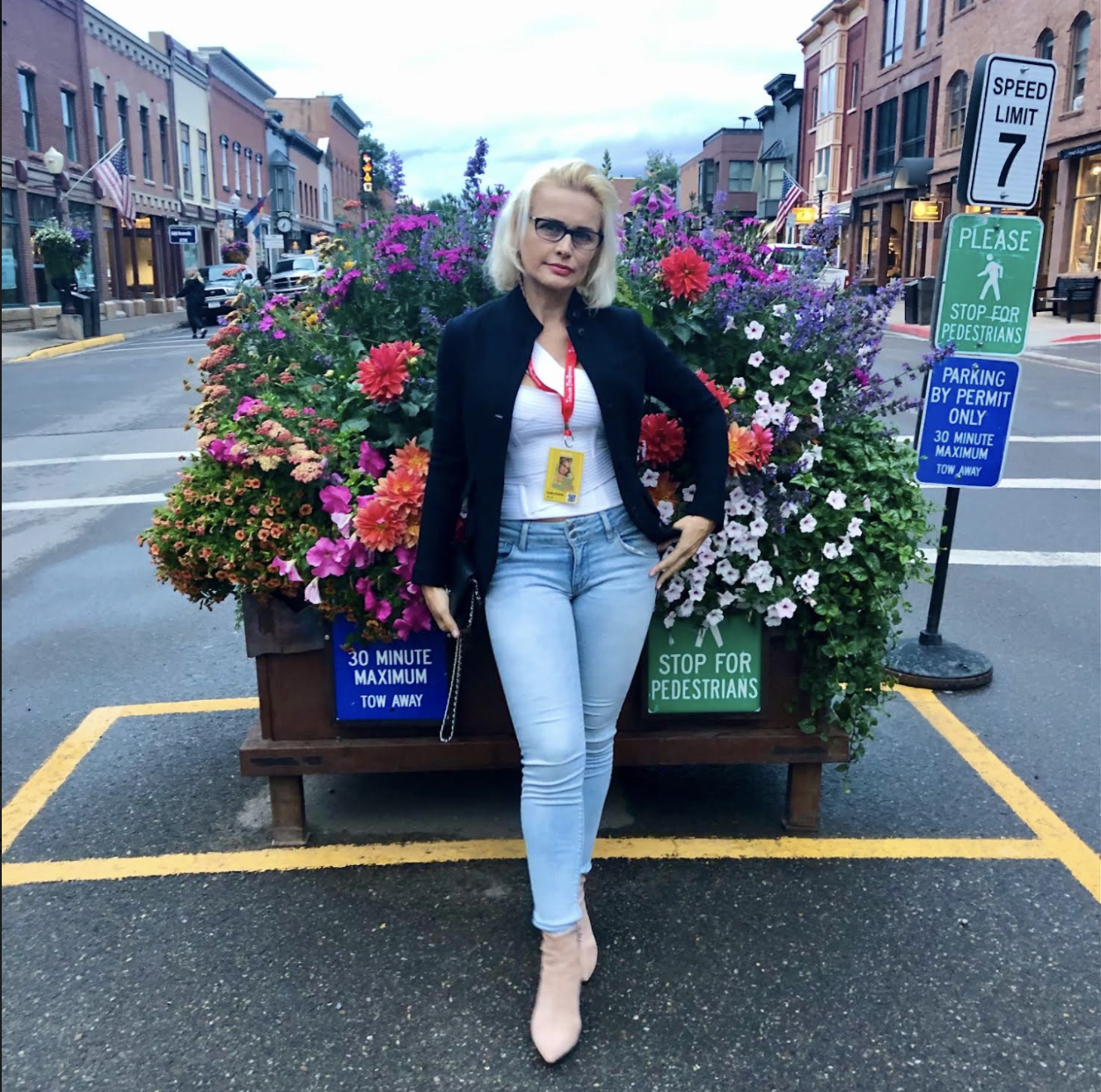 Taste-wise, Criterion elites live in their own realm.