UHD “PTA” Buyable for $10 Bills
So why invest in a 4K Bluray version that cost $22 plus shipping?? Login with Patreon to view this post
November 23, 2022 4:27 pmby Jeff Wells
56 Comments
Peter Weir’s Blessed Decade

Then God’s light stopped shining and Weir’s perfect string ran out. Weir remained an excellent filmmaker (which he still is today) but like so many gifted directors, he became an in-and-outer.

The Mosquito Coast (’86) was his first dud, but he rebounded with Dead Poets Society (’89). Then came the appealing but insubstantial Green Card (’90) and the relentlessly downish and altogether impenetrable Fearless (’93), which only people like David Poland really loved. This was followed by The Truman Show (’98), which self-destructed with one of the worst bullshit “happy” endings ever devised.** Master and Commander (’03) was an awesome rebound but then the candle went out.

Weir’s most recent film, the underwhelming The Way Back, opened 12 years ago. What happened?

If I’m on a plane that crashes and I somehow manage to escape without a scratch despite almost every other passenger being killed or severely injured, I would take a few moments to collect myself…five or ten minutes, I mean. Then I would submit to what I imagine would be absolute happiness. Nothing but pure joy and relief.

The remainder of my life would be a radiant celebration of the mere, magnificent fact that I’m alive. (Which is what we should all be feeling anyway.) I would become a perfect…make that an imperfect smile. I would tingle with ecstasy at every sensation, every thought…every sight, sound and aroma…the precious symphony of living.

What does Jeff Bridges do when he survives a catastrophic plane crash in Peter Weir‘s Fearless (’93)? He becomes a sullen, moody, withdrawn shithead. He snaps at people, looks at them sideways, crawls into his own cave, makes life miserable for poor Isabella Rossellini and generally becomes an asshole. Thanks, Jeff! 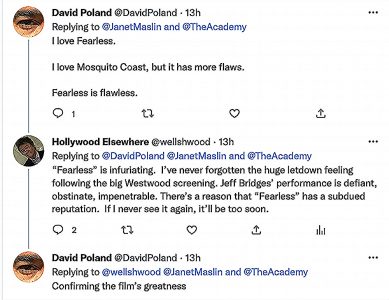 I don’t know or care all that much about the fortunes of Lucasfilm and the Star Wars franchise. But the John Campea rumor about Lucasfilm honcho Kathleen Kennedy possibly losing her job between now and next summer (which World of Reel has included a link to) got my attention.

John Campea on rumored demise of Lucasfilm’s Kennedy (11.22): “This is what I have heard: I have heard that the decision to remove Kathy Kennedy has already been made and that she will be gone either sometime before or very, very, very shortly after the release of Indiana Jones 5.

“Now, I want to be very, very clear here: I cannot independently say to you and confirm to you that this is a fact. I will say that one of the two people that have contacted me has a 1000% average on the things they’ve informed me of.”

Funny Ruimy statement: “My advice to Disney is simple: DON’T HIRE RIAN JOHNSON [to make a new Star Wars trilogy]. Not because he’s a bad filmmaker — he’s actually a pretty good one. [This is more] from the fact that a majority of Star Wars diehards just plainly do not like him for what he did with The Last Jedi.” 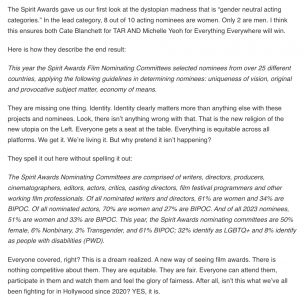 I’m immensely grateful, by the way, that Sasha used the term “dunzo.” I’d stopped using it and hadn’t heard anyone else use for a good 15 years or so.

Excellent excerpt: “The Academy should never go down this path or they will be dunzo in the eyes of the public. I promise you, most people in this country and world aren’t utopians. They still want to know that people who accept awards, or are nominated for them, got there because they gave the best performance — the best performance

“Yes, all of the categories at the Oscars are gender-neutral by default. I have always believed this made it much harder for women to compete, especially in the Best Director category. At least with the acting categories, they knew they would always have ten slots no matter what. The same goes for men.

“Ultimately, maybe this awards race, this Oscar game I once helped launch online in 1999 is, by now, No Country for Old (Wo)Men.”

Why did the Spirit Davidians ignore Close for the Best International Film award?

Barry Corbin to Tommy Lee Jones: “You can’t stop what’s coming. It is all waiting on you. That’s vanity.”

It must be clear to every man, woman and child at this point that the people behind the Spirit Awards noms have gone totally insane.

Yesterday I didn’t get around to posting about Mickey Kuhn, the youngish actor of the ’40s and early ’50s who had noteworthy supporting roles in Gone With The Wind (Beau Wilkes, son of Leslie Howard and Olivia De Havilland), Red River (young Mathew Garth) and A Streetcar Named Desire (sailor who gives Vivien Leigh directions at the very beginning).

I’ve watched Gone With The Wind several times and haven’t the slightest recollection of the adolescent Kuhn doing or saying anything. Then again he appears in the boring second half, which I tend to phone-surf through.

Wiki excerpt: “Kuhn worked for American Airlines from 1965 to 1995, and particular at Boston’s Logan airport in administrative positions.” HE to Boston friendo: “Hey, remember that kid who played John Wayne‘s scrappy adoptive son in Red River? I swear I saw him last weekend out at Logan.”

The fact that Kuhn was married five times between the mid ’50s and mid ’80s suggests an unsettled psychology. That or he liked to play around. His fifth and final wife, an American Airlines co-worker named Barbara Traci, was married to Kuhn from 1985 until his death — a 37-year bond.

Kuhn passed two days ago in Naples, Florida, at age 90.

On 12.13.22 a much larger audience will have access to Martin McDonagh’s family-friendly, bloody-finger-stumps drama, and obviously in time for the year-end holidays.

And you’re reading about this nightmare and going “good God!!” It’s a story about epic-scale derangement and dysfunction and unbridled rage on the part of ALA, and it just makes you feel sick to read it. There’s some sort of lunatic virus streaming through a white-trash subset of the American middle class right now, and the overwhelming impression is that these people are degraded and diseased and unable to focus their energies in any kind of healthy (or at least non-destructive) direction.

Aldrich, whose birth name was Nicholas Franklin Brink until he changed it in 2016, got into some kind of guns-at-the-ready trouble with the local fuzz in ’21, and you’d think with his history that someone in authority would take his weapons away as a cautionary move while examining his situation. 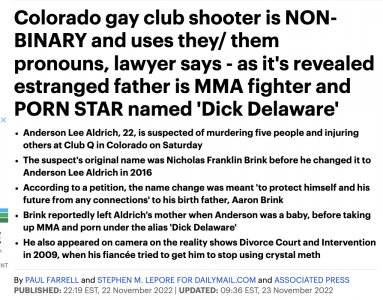