I’ve always been a “Hal Ashby devotee”, but what does that phrase really mean? That I’ve long had to balance my worship of Ashby’s legendary ’70s films with the awkward, less than fulfilled, in some cases cocaine-flaked failures of his ’80s features.

All hail Harold and Maude, The Last Detail — generally regarded as Ashby’s masterpiece — Shampoo (which Ashby didn’t really direct as much as submit and relinguish to the will of Warren Beatty), Bound for Glory, Coming Home (Ashby’s second-best film) and Being There (which has lost much of its potency since ’79, at least in my own head). And offer a sad shrug to Second-Hand Hearts, Lookin’ to Get Out, Let’s Spend the Night Together (a better-than-decent Rolling Stones concert doc), The Slugger’s Wife and the half-resurgence of 8 Million Ways to Die. 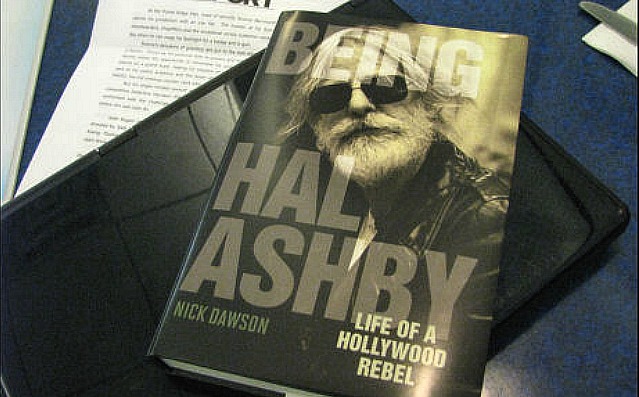 So I’ve long been uncertain about his legacy — who hasn’t been? But six and a half years ago Nick Dawson‘s “Being Hal Ashby: Life of a Hollywood Rebel” convinced me that with any kind of half-fair perspective, Ashby’s decade of ’70s glory definitely out-classes and outweighs the tragedy of the ’80s and how the derangement of nose candy enveloped and swallowed the poor guy.

Hence my strong interest in Amy Scott‘s Hal, a 90-minute doc about Ashby’s high and low times that will debut at Park City MARC on Monday afternoon, and then screen three more times — Tuesday evening at the Prospector, Thursday morning at the MARC and Friday morning at the Holiday 2.

From Sundance program notes: “As befits a subject whose stretch of work especially in the 1970s included Harold & Maude, The Last Detail, Shampoo and Coming Home (he was Oscar-nominated for that one), interviewees include collaborators Jeff Bridges, Jane Fonda and Louis Gossett Jr. as well as Alexander Payne, Judd Apatow, Lisa Cholodenko, Beau Bridges, Haskell Wexler and Norman Jewison. “It was Jewison who gave Ashby his first big Hollywood break, as a film editor, after Ashby landed in L.A. — they teamed on The Cincinnati Kid, The Russians Are Coming! (Ashby’s first Oscar nom for editing), The Thomas Crown Affair and In the Heat of the Night, which won Ashby the Oscar. It was under Jewison’s stewardship that Ashby found his passion for stories about social justice, class and race.

“The film also details Ashby’s many clashes with studios and a string of less-than-successful movies in the ’80s. He died of cancer in 1988.

“Amy Scott’s exuberant portrait — drawn from rare archival materials, interviews, personal letters, and audio recordings — explores that curious oversight, revealing a passionate, obsessive artist. His uncompromising nature pitted him against studio meddling, particularly when a string of ’80s flops tarnished his legacy. But Scott conjures the special quality Ashby’s films possess– an elusive blend of honesty, irreverence, humor and humanity. Through Hal, you feel buoyed by Ashby’s love of people and of cinema, a little like walking on water.”