I tapped out a brief thing yesterday about the ’09 award-level films, one of them possibly being Clint Eastwood‘s Changeling (Universal, 11.08)…except I called it The Changeling, which was and still is incorrect, according to Universal publicity. 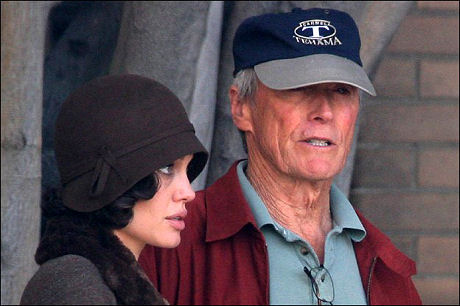 I used the “The” was because Red Carpet District‘s Kris Tapley called it The Changeling and because the IMDB is calling it The Changeling, which, I’m sure, is at least partly due to Peter Medak‘s The Changeling, a 1980 film with George C. Scott, using the “The” in its title.
In any case we were all wrong. Eastwood’s film, which costars Angelina Jolie, John Malkovich and Amy Ryan, is called Changeling…one word, not two. Issue settled.
I hate that word, by the way…”changeling.” It means “a child unintentionally or surreptitiously substituted for another” but that’s a fairly bizarre thing to have happen, no? Why is there a word for something like this? Why isn’t there a word for a dog that has had a bucket of red paint spilled over its body? Why isn’t there a term for a man who has had his suit tailored and discovered that the tailor has sewn up rear slit in the jacket? I understand calling a young tree a sapling or a very young horse a yearling or brothers who puts on circuses with rings in the center of the tent being called Ringling. But “changeling” bugs me for some reason.