“I’m in my second cut, which means I’ve put the movie together and I’ve seen it. I usually do about five cuts as a director. The best news is that, when I saw the movie myself the first time, there was nothing I wanted to go back and shoot, nothing I wanted to reshoot, and nothing I wanted to add.” — Indiana Jones and the Kingdom of the Crystal Skull director Steven Spielberg to profiler Jim Windolf in the just-out Vanity Fair. 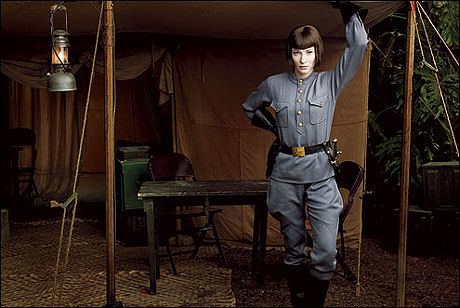 “Set in 1957, the new film pits Indy against Russian Cold Warriors, including Cate Blanchett, whose character, Agent Spalko, looks like the toughest Soviet customer since Lotte Lenya’s Rosa Klebb took on Sean Connery in From Russia with Love.”

Spielberg also notes that he screened the first three Indiana Jones films for Indy 4 cinematographer Janusz Kaminski, renowned and dreaded for his repeated use of oppressively milky, white-sunlight-saturated color in film after film.
“I needed to show them to Janusz,” Spielberg says, “because I didn’t want Janusz to modernize and bring us into the 21st century. I still wanted the film to have a lighting style not dissimilar to the work [that original Indy dp] Doug Slocombe had achieved, which meant that both Janusz and I had to swallow our pride. Janusz had to approximate another cinematographer’s look” —thank God! — “and I had to approximate this younger director’s look that I thought I had moved away from after almost two decades.”