Amy Rice and Alicia Sams‘ By The People: The Election of Barack Obama will finally debut on HBO on Tuesday, 11.3 — precisely 365 days after the ’08 Presidential election came to an end. I reviewed the film in early August after catching a showing at the Sunshine Cinemas, and there wasn’t any way to be kind or charitable. It’s a political chick flick with no edge — butter wouldn’t melt in its mouth. And it’s way too easy in its depiction of Hillary Clinton ‘s campaign. 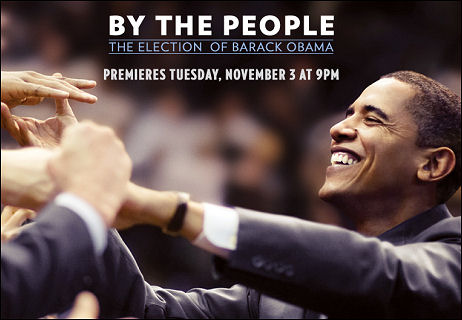 I began by calling it “a fairly bloodless portrait of one of the most fascinating, breathtaking, sometimes ugly, occasionally transcendent, up-and-down racial-tinderbox elections in our nation’s history. It’s up-close and somewhat intimate and sorta kinda dull at times. Not novacaine dull but glide-along, yeah-yeah dull.

“You’d never know what a heart-pumping ride Obama’s two-year campaign for the White House was by watching this nicely assembled but excessively mild-mannered film.

“Rice and Sams were given extraordinary close-up access to candidate Obama and his innermost circle (David Plouffe, David Axelrod, Robert Gibbs, etc.) as well as Michelle, Sasha and Malia. The co-directors caught some good stuff along the way (Obama tear-streaking when speaking about his recently-deceased grandmother, a ten year-old campaign worker patiently dealing with a contentious voter over the phone, etc.) but it almost seems as if Rice and Sams agreed to let Axelrod and Gibbs co-edit the film with an aim to de-balling and up-spinning the final version as much as possible.

“This seems especially apparent given the overly-diplomatic and toothless portrait of Hillary Clinton‘s campaign. Her current position as President Obama’s Secretary of State obviously means it would have been very politically awkward for a documentary to bring up her frequently ugly, race-baiting campaign tactics and so — I don’t mean to sound over-cynical and pat-minded but how else am I to process this? — Rice and Sams have given her a near-total pass.

“It’s even more bizarre that the racial resistance factor among white voters — surely the central hurdle of Obama’s campaign — is only faintly acknowledged. We’re shown a clip of a couple of younger Bubbas stating that Obama’s ancestry is a problem, but that’s just about it in terms of Rice and Sams catching the backwater attitudes that were brought up by reporters and the political talk-show crowd nearly every damn day during the primaries and the general election,

“The Reverend Wright issue is raised (how could it not be?) along with Obama’s historic Philadelphia speech about racial relations. But there’s no mention of Michelle taking heat for saying that the positive response to her husband’s campaign was cause for her feeling proud of the U.S for the first time in a long time. There’s no mention of that idiotic terrorist fist bump flap. No YouTube clip of that West Virginia cracker lady on the back of that motorcycle expressing cultural shock at the sound of Obama’s name. There’s no mention whatsover of the fear of the Bradley Effect, a now-discounted concern that white voters might change their minds about voting for a black candidate in the privacy of the voting booth due to latent racism. And Obama’s decision to finally cut all ties with Reverend Wright is completely ignored also.

“And there’s very little mention of the general campaign against John McCain and Sarah Palin. It accounts for maybe ten minutes out of the film, which runs somewhere close to two hours. (I should have timed it but didn’t.) No right-wing stirring of the racial pot, no mention of McCain’s ‘The One’ ad (and no clip of David Gergen explaining that the racial coding of that ad was clear to anyone who grew up in the South), no expressions of bone-dumb ignorance (‘He’s…I think he’s an Arab’) and/or racial hatred at McCain and Palin rallies (‘Kill him!’).

“There’s some good B-roll footage of Obama playing basketball with friends, but the best photo-op basketball moment of the entire campaign — i.e., the moment when Obama made a near-perfect shot from outside the penalty circle in front of an audience of troops in Iraq — is missing. It leads you to suspect/presume that Rice and Sams didn’t cover last summer’s Middle East/European tour, and to ask why.

“In sum, For The People emphasizes emotionality and intimacy at the expense of the fierce melodrama and primal intensity that were fundamental aspects of the story. I could be mean and call it a puff piece and….you know something? It’s not being mean to say that because it more or less is that. I’m not saying that Rice and Sams were in fact emotionally entwined with the Obama campaign, but the doc makes it seem as if they were. And that’s a no-no. You have to step back and disengage and be merciless, if necessary.

“There are several little things in the film that are pleasing or revealing in this or that minor way. But the fact is that most of the film is not focused on Obama himself as much as his campaign staff, and much of this footage feels like B roll. The narrative emphasis in the doc is akin to the kind of backstory you might pass along to your grandmother as you show her your family photo album and explain this and that. It’s too kindly and considerate and smoothed over..

“It’s been pointed out by a friend of Rice and Sams that ‘the filmmakers made the film they wanted to make…it’s called By The People. And they captured the emotion of the campaign.’ On this last point I respectfully disagree.”