There’s one aspect of Sherlock Holmes that deserves favor. Robert Downey, Jr. has assembled a Holmes personality apparently based on his own personal situation as he made the film — a bright and gifted fellow who’s “not there” in a kind of Dylanesque sense, and therefore has a certain something or other that holds the tiller steady. A certain fuck-all integrity? Determination? A willingness to succumb to corporate corruption? 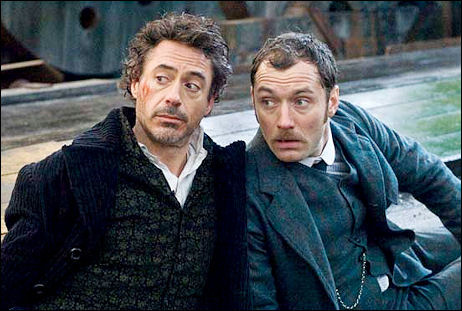 The brightness levels in this shot of Robert Downey, Jr. and Jude Law in Guy Ritchie’s Sherlock Holmes weren’t evident at tonight’s 7 pm screening at the Regal Union Square Stadium 14. The image was much darker.

I only know that Downey has figured out a way of “being” in this godawful film that holds together on some level, and that in place of exuding anything real or substantial (and what actor would attempt this under these ridiculous circumstances?) Downey ambles through with a kind of rock-solid aloofitude that…well, kind of works.

Which is to say a kind of attitude dance in which he’s a 40ish fellow who goes “eewhh, eewhh” and “doop-poop-pee-doop” and “who, me?” no matter what happens or who says what or what deathly dull villain with brownish or missing teeth is threatening him. He’s playing dry, bent, whimsical, unperturbed. He’s never been more boring, and it was the only way he could have gone, given the stakes and the salary and the bullshit levels.

And Jude Law, as Holmes’ soul mate, minder and platonic lover Watson, is playing admonishing, dryly perturbed and always patient. And away they go down the muddy London lane. Enjoy their fey verbal ping-pong or not, but if you don’t (and I didn’t, not really) then you’re dead and so is the movie. Because there’s nothing else to hold onto. Well-dressed demonic evildoers…I’m sorry, did somebody say “well-dressed demonic evildoers”? The mucky 19th Century period atmosphere is all skank and slime and dust and splinters and squalor — I’m putting myself to sleep just remembering what it was like.

Sherlock Holmes is a corporate disease movie — a period put-on concept that reaches out from the screen like a grinning Irish banshee that surrounds you with frigid air and induces a gradual comatose state. I sat there like a mental patient, but a thinking one. Within 15 minutes I was considering an early bail-out. I finally manned up and left around the 70-minute mark.

Actually, forget the banshee. I felt as if I was strapped to a gurney with a plastic tube snaking out from the screen with poison slowly feeding into my arm from an IV drip. I was sinking, dying…going under. I hated the film, yes, but mainly myself for having paid money to see it at the godawful Hell Pit known as the Regal Union Square Stadium 14. Myself and my son Dylan, scrunched into the rear row of the front section with an older couple to my left and two women to their left who were sick and tired of my coming and going (especially the final time). And I didn’t blame them.

I can’t remember any reviews that have commented on Philippe Rousselot‘s desaturated-color cinematography. It’s awfully murky and dark — seriously underlit, I mean — and quite oppressive for that. Maybe the brightness levels (i.e., foot lamberts) in the Regal projector showing the film had been deliberately turned down. Theatre chains do this, I know. All I know is that I was muttering to myself, “This godawful thing doesn’t even look good…I can’t even cruise along on the craft of it, for God’s sake.”

This isn’t Wild Wild West, but it’s a similar kind of travesty.