[Update: This story was accidentally deleted during an iPhone edit yesterday afternoon. I re-posted it around 6 pm last night but all the reader comments were lost.] I drove out last night to the TV Academy theatre on Lankershim (which is way out there, about halfway to Palmdale) for a chat with The Bank Job director Roger Donaldson. He was waiting for a screening of his well-reviewed British crime film to finish so he could do a stage chat with moderator Pete Hammond. 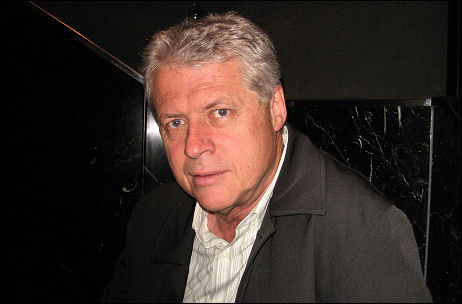 The Bank Job isn’t a whammy-chart action film. No car chases, no explosions and star Jason Statham only beats up one guy in the whole thing. And it’s not a classic drama. But it’s the best crafted and most gripping low-key suspense thriller I’ve seen in ages. “I don’t want to blow a gasket over this thing because it’s just a good British popcorn film,” I wrote last Friday, “but entertainments of this sort — tight, tough, well-honed — are few and far between.”
I asked Donaldson if the fact that guys like myself are fans of The Bank Job is a bad box-office omen. Serious action and thriller fans tend to like their movies to be a little dumber and blunter…no? I shouldn’t say this, I suppose. I just feel that serious action hits are — I want to put this carefully — not exactly aimed at a cretin mentality, but they have to at least make room for it. Is that fair?
I told Donaldson I was especially pleased with The Bank Job‘s expositional dialogue, which always kept me engaged and feeling informed and never made me feel like I was falling behind. Casting was a very important element, he said, with 30-plus speaking parts. He shot The Bank Job in about 60 days. 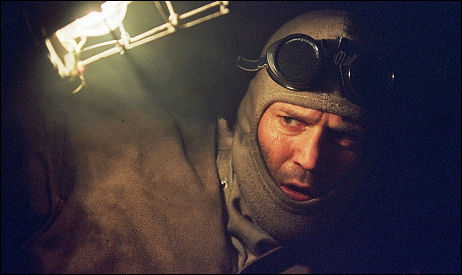 Jason Statham in The Bank Job

I haven’t gone to Statham’s previous films because it doesn’t thrill me that much to see the hero kick the shit out of the bad guys, I told him. But when Staham goes to town on a guy (or two or three) in The Bank Job, I loved it. Statham could be the new Steve McQueen, we agreed, but in the future he has to try and get himself into more action movies that Matt Damon might say yes to, and fewer that Jean Claude Van Damme might star in.
What is Donaldson’s favorite heist film? “I haven’t seen a lot of them,” he confessed. He’s never even seen the popular Topkapi, he said. But he’s a big admirer of Jules Dassin‘s Rififi. He believes, however, that the music-free heist sequence wouldn’t, in a new version, work with today’s audience unless it was scored, and he’s not sure that the dark ending (the wounded Tony driving the little kid back into Paris and the arms of his mother before dying) would work either.
Hammond said to me later that Donaldson is a dead ringer for Bill Clinton. I don’t disagree, but the more I think about it the less I agree. He looks like Clinton’s older, more bohemian older brother from California. 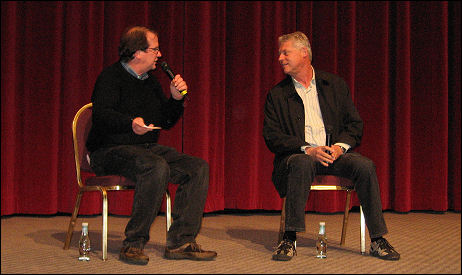