It’s perfectly allowable to take shots at Get Low and thereby lower its Rotten Tomatoes rating to 88 and Metacritic rating to 78. But I’m having trouble comprehending how any critic could say to himself or herself, “Wow, this film really deserves to be slammed and I’m going to tear it a new asshole.” I know that feeling and the qualities that tend to motivate it, and, trust me, Get Low doesn’t deal those kind of cards. 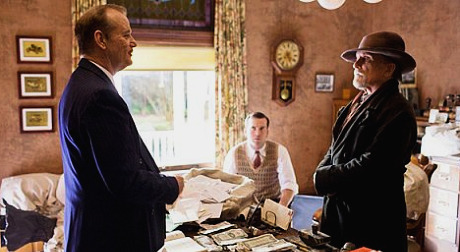 Aaron Schneider‘s period drama is one of those laid-back fable movies — not quite “real” but carefully done and honestly rendered as far as it goes and therefore real enough. Set in 1938 backwoods Tennessee, it feels polite and quiet and connected to the gentler aspects of life. There are no sudden jolts in the story, and no child molester characters, no malicious toothless hillbillies or murderers or moonshiners, no shotgun yokels, etc. It takes its time and doesn’t push too hard (although some of it feels a little on-the-nose), and knows what it’s doing every step of the way.

Get Low is a restrained and atmospheric soft-shoe shuffle about regret, decency, nightmares and making amends, and about one ornery old dawg (very nicely played by Robert Duvall) finding a measure of peace at the end of the road. It’s about clean, elegant dialogue and exceptional, pitch-perfect acting all around, especially from Duvall, Bill Murray (as a considerate, fair-minded, moderately greedy undertaker with a certain Murrayish wit about him), Lucas Black (as Murray’s solemn assistant) and Sissy Spacek (as the sister of Duvall’s…I’d better not say). It’s slowishly paced, but fittingly for the time period and milieu.

The sharpshooters, some of whom are fans of Todd Solondz (if you catch my drift), are primarily complaining that Get Low is too mushy, too cornball, too formulaic, too folksy, too obvious, too unsubtle, too underlined. For them, they mean. They wanted a less conventional, less recognizable, more off-kilter sort of deal.

Well, I know from mushy, cornball, formulaic, folksy, obvious, unsubtle and underlined, and trust me, these guys are being way too picky. Get Low flirts with a faintly cornball vibe from time to time, but the nip-nippers are almost accusing it of being Mayberry R.F.D., and that’s ridiculous. Its a lot closer to the kind of material that the late Horton Foote used to write.

The fact that Get Low will almost certainly wind up as one of the ten Best Picture nominees is especially bothersome to some. Slant‘s Nick Schager writes that “one can practically hear the Oscar telecast’s orchestral music cuing up at the close of Robert Duvall’s every scene in Get Low, what with his role — as a mysterious hermit in 1930s Tennessee who plans to stage his own funeral before his death — the type that’s been designed, down to its measured beats of dialogue, to garner year-end accolades.”

Maybe so, but I know when a film is being relatively honest and straight-shooting and doing everything it can to get it right by taking things down a notch and not forcing the issue, and Get Low is one of those films.