I got stuck on a story late yesterday afternoon and consequently missed my last shot at seeing Scott Pilgrim vs The World (Universal, 8.13) for free. Okay, maybe I half-wanted to miss it due to serious concerns about sitting through another default, deadpan, deer-in-the-headlights Michael Cera performance. 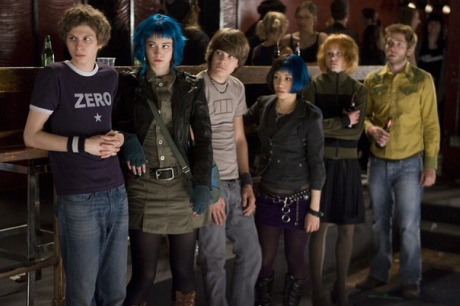 Michael Cera (l.), Mary Elizabeth Winstead (second from left) and the cast of Scott Pilgrim vs. the World (including Allison Pill, second from right).

It’s gotten to the point where the very thought of Cera and that annoying look on his face — a look that says (a) “Uhhm, do I want to be here?,” (b) “My mind is slightly blown but I’m also kinda bored at the same time,” (c) “Whoa, she’s kinda hot” and (d) “It’s not easy being the hippest, most deapanny guy in the room” — will make my jaw tighten and my teeth start to grind.

But the mostly positive reviews for the film, especially the one by Cinematical‘s Todd Gilchrist, have convinced me that I erred in semi-consciously blowing off last night’s screening. Scott Pilgrim is some kind of generational event flick, and anyone with any pretensions to being half-aware of movies as diviners of cultural currents has to see it and deal with it. It’s possible that I’ll hate it, but it has to be seen.

My son Jett got to the 6 pm Lincoln Square Scott Pilgrim all-media on time, saw it and liked it. I asked him to bang out a couple of graphs.

“If you grew up with Super Mario, Nintendo and Atari, you’ll be in sync with the humor in Scott Pilgrim vs. The World,” he wrote last night. “It’s a love story structured like a video game in the cutthroat world of dating when you’re 18 to 24 years old. Before you jump into this flick you’re going to have to think video-game rules — second lives, Japanese anime fight sequences, magical powers, and the possibility that anyone, including Michael Cera, can kick the shit out of you.

“I’m calling it the funniest movie of the year, thanks in part to great performances by Cera, Alison Pill and Kieran Culkin. Try to imagine snarky humor in the style of Speed Racer and Dragon Ball Z, and you’ll come close to the chemistry I’m speaking of.

“Can’t buy into the idea that a guy has to fight off seven evil ex-boyfriends to win the girl of his dreams? If so you’re being too literal. Scott Pilgrim unfolds in a realm like any video game you might play today, which always has a sequence of levels and evil bosses you must defeat in order to win the game. Either you get this or you don’t, and guys like Rex Reed probably won’t.

“If you look past the video game motifs, the story’s jabout a wimpy 22-year old boy in love with a tough guarded girl with a rocky past. But otherwise forget about the absurdity — it’s beside the point.”