It’s about the racially motivated Osage Murders — roughly 60 wealthy Osage Native Americans killed by white supremacists over oil money — that happened between 1918 and ’31.

“The genocide by white America against Native nations during the century leading up to Grann’s period is a metaphor for humanity’s decimation of the natural world which the Natives saw as sacred,” wrote The Guardian‘s Ed Vulliamy. “Grann’s book is a timely and disturbing chapter in the original, terrible atrocity.”

I don’t know enough about Scorsese’s $200 million Apple adaptation to ask anything more than rudimentary questions. I only know the various summaries of Grann’s book, and what’s happened with the film so far, etc. I guess I know a few things, but concerns are welling inside. 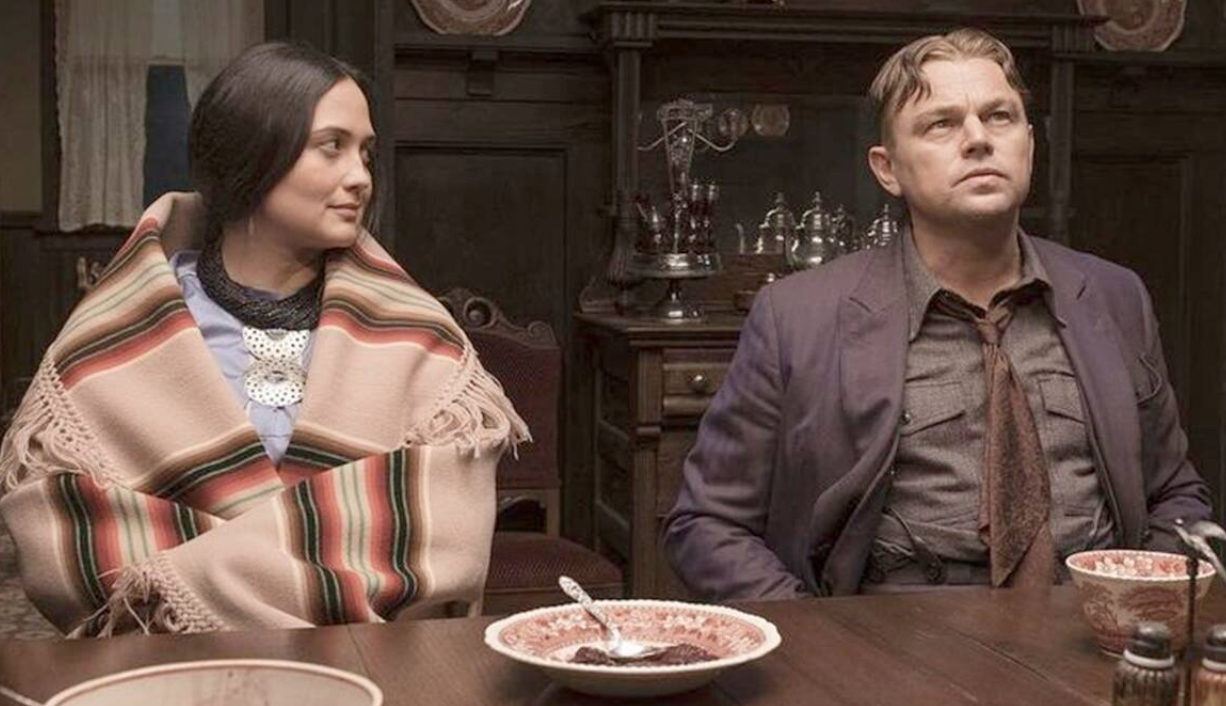 I’m feeling this primal fear that Killers, when you boil it all down, is going to play like some kind of huge WHITE MEA CULPA “EXPUNGE THE EVIL” APOLOGY FILM…as in “BLM and 1619 and the woke community have been hammering home the scope of current white venality, and now we’re going to dramatize what it was like back in the 1920s…more hammering!”

In so doing the film will no doubt say (as it should) that the murderous savagery that William Hale (Robert De Niro) and Ernest Burkhart (Leonardo DiCaprio) and other venals perpetrated upon the Osage Nation commmunity…what happened back then was horrific.

But is this strictly a violent history lesson, or is there a 2021 echo in this thing? Will the film simply be saying “look at the horrors that happened nearly 100 years ago” and let it go at that? Or will it be saying “it wasn’t just Hale and his murderous deeds that we’re sorry for as much as the innate evil within ourselves, for there are pieces and slivers of William Hale in all of us, God forgive ourselves and our ancestors, and so white Americans need to atone and atone and atone again.”

I, Jeffrey Wells from suburban New Jersey, may in fact be a chip off the old Devil Incarnate (or perhaps a nephew of the beast who mounted and impregnated Mia Farrow in Rosemary’s Baby) whose ancestors brought horrific racial malice to this once-virgin land. And yes, America may in fact be the ugliest, most racially poisoned serpent’s nest of a country in the history of the globe…nobody’s arguing that.

But I can’t honestly say that I want to sit through a prosecutorial harangue all that much, and I sure as shit don’t want to pay $20 plus popcorn and parking to see another evil whitey indictment film. And I know Joe and Jane Popcorn are looking for something besides this as well. Many of us in the blue cities fully understand we are Satan’s seed — that accusation has been drilled into our heads for the last eight to ten years if not the last several decades — but I really don’t want to absorb it yet again for a two-hour stretch in a theatre. Because I already have a headache.

I had thought all along that Scorsese’s film might be a cousin of Costa-Gavras‘ Z with a little Mississippi Burning bullshit blended in, and that there would be a prosecutor character like the one played by Jean Louis Trintignant and maybe a badass FBI good guy like Gene Hackman‘s FBI agent in Alan Parker‘s film, but when I read that DiCaprio had decided to play DeNiro’s scurvy scumbucket nephew, I went “oh, no…he’s playing his Shutter Island psycho again.”

I’m terrified that this film will turn into a severe $200 million moral condemnation drama…a dusty 1920s Oklahoma saga that will strangely resemble the “I’m so evil that I can’t help sweating” Shutter Island.

And when I read Jesse Plemons would now play Tom White, the investigating FBI hero (i.e., the Trintignant figure?), I went “oh, no!”, again because Plemons always plays twitchy, fucked-up, ginger-haired creeps (I’m Thinking of Ending Things is a master class in this kind of character) and I’m thinking, “Okay, so there’s no Jean-Louis Trintignant or Gene Hackman but there is The Man From Creep City? The guy who couldn’t explain why he left a huge raw fish on the back seat of his car is the hero of this thing…the redeeming figure, the crusader, the guy I’m supposed to identify with and feel comfortably in league with?

I would love to see this upcoming Scorsese film, naturally, and I know that Hale and the other baddies get their just desserts in the end, but I’m getting scared, very scared of what the film may deliver, subcurrent-wise.

Aside from telling a good crime story, will the sprawling, super-expensive Flower Moon deliver something other than a BAD WHITEY LECTURE? Does it deliver a satisfying catharsis other than Hale, Burkhart and the rest being arrested and prosecuted?

Thought from person involved in the film: “Try to have the belief and faith that I have in the great sensitivity, intelligence, and artistry of the maestro to make a work of art and conscience that doesn’t require bullhorns.”