Yesterday was half-consumed by hellish vagabonding; the rental-share I had fell apart and I had to scramble to find a close-to-the-action crash pad with good wifi. Despite this, I’ve managed so far to see Brett Morgen‘s Chicago 10, Tamara Jenkins‘ The Savages, Mike Cahill‘s The King of California and Jorge Hernandez Aldana‘s The Night Buffalo. 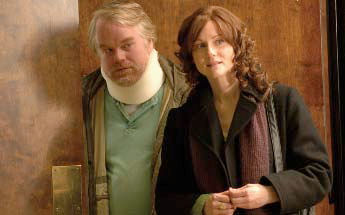 None really did it for me in an emotional world-rocking sense, although Jenkins’ film is by far the best written and acted. It’s a wise/sad/funny downhead drama about a 40ish brother and sister (Philip Seymour Hoffman, Laura Linney) trying to care for their withered, close-to-death dad (Phillip Bosco) and cope with the inevitable.
That’s what we’re all doing, no? (Apart from living our lives, I mean.) Facing the fact that we’re all going to die, and grappling with the fact that every child has to do what he/she can to aid their parents as they gradually submit to the end-game process? Jenkins’ screenplay is certainly a high-end treatment of this. It somehow transforms an innately gloomy situation into something that keeps you interested and, as far as it goes, aroused.
I had to bolt toward the end (my parents are close to this stage — it hit too close to home and I just couldn’t handle it) but The Savages is a totally grade-A indie drama. Except for one aspect, that is — it makes you feel caught in a downward spiral the way life itself can feel that way when death is hovering. Jenkins has my respect for facing this issue squarely and honestly without any Hollywood-style jacking around, but the movie unfolds as a series of vignettes rather than a building/expanding drama with two or three significant turns in the road.
Good God….I just lost over two hours worth of writing — thoughts on Chicago 10, The King of California and The Night Buffalo — by hitting the wrong key or something. It’s all gone and I can’t start over again. I have films to get to, stuff to do, etc. This is infuriating, but I have a radical new idea (for the time being) — what I think about yesterday’s Sundance films doesn’t matter because, The Savages excepted, they all didn’t make it in one way or another.
If you’re not really turned on by a string of films, why get into them? If something really does it for me, I’ll write about it. Otherwise, screw it. I’ll just experience what I can and write what I can manage, and that’ll have to be enough.
Nearly two and half hours worth of work….1200 words, a lot of thought, a single stroke of a key.