Yesterday I did a brief phoner with Blue Valentine star Michelle Williams. For my money she and Ryan Gosling give honest, open and close-to-brilliant performances in Derek Cianfrance‘s hip-pocket drama, which I wasn’t entirely in love with at Sundance but which I did a kind of turn-around on when I saw a re-cut version at last month’s Hamptons Film Festival. The John Cassevetes aroma sank in more deeply.

I still find Gosling’s mannerisms and constant smoking irksome (especially when he’s carrying his daughter), but I couldn’t help but chuckle when I realized last month that he’s modelled his performance on an imitation of Derek Cianfrance — not just the hairline but the accent and vocal mannerisms. For some reason that changed my whole viewpoint.

For some reason I felt it might be slightly more interesting to “shoot” the conversation with video than just provide an mp3.

We got into the ridiculous Blue Valentine NC-17 rating issue, talked a little about the making of the film and the motivations of the characters, and then wound things up with a brief chat about Heath Ledger, who was always friendly and considerate to me, and who first introduced me to Michelle five years ago, at a Toronto Film Festival party for Brokeback Mountain.

Williams was calling from London where she’s shooting Simon Curtis‘s My Week With Marilyn, a film about the somewhat contentious relationship between Marilyn Monroe (whom she portrays) and Laurence Olivier (Kenneth Branagh). The Weinstein Co. will distribute.

I reviewed my impression of Blue Valentine‘s “hotel sex scene” that reportedly caused the NC-17 rating. The scene is “just about what happens in a marriage,” I said. “We all know what it is to watch a film break the boundaries of sexual depiction, and this sure doesn’t qualify. It’s just a portrait of a disintegrating relationship.” 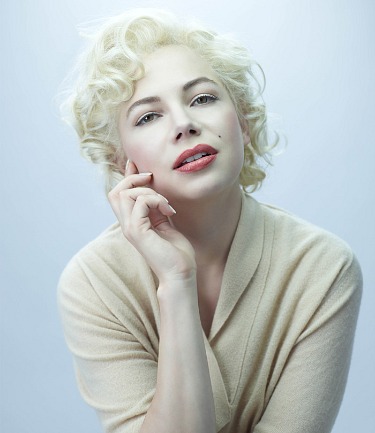 Williams agreed and said, “We never set out to scandalize or titillate or upset anyone’s moral sense. We just wanted to be as honest as we possibly could…so it was a real shock when this rating happened, which suggested there was something tawdry about it. This is not a movie that sells or glorifies sex in any way.”

Blue Valentine portrays two stages of a marriage — the hopeful and glowing beginning and the depressing and downbeat finale. We reviewed the reasons why her character has fallen out of love with Gosling’s character.

“The most obvious bone that she can pick with him, yeah, is, ‘why don’t you want to do something more?,” she said. “Along with…it’s kind of a loss of his magical quality. It shouldn’t come as a surprise and it doesn’t, but when you first fall in love with somebody, how many things do you ignore?” A lot, I said.

“You’re in a fairy tale and he’s a knight in shining armor, and so you ignore things that you don’t want to see and which don’t fit into your vision….or you’re saying he’ll grow out of that or that he has some other qualities that make up for it. I think the person she really can’t stand in their relationship any more is herself…it’s her.”

I astonished myself by momentarily forgetting the name of her “covered wagon movie,” as I put it. It’s called Meek’s Cutoff, and no one will ever remember that title.

I wasn’t going to bring up the subject of her late husband, whom I “knew” slightly from a certain distance. But when I mentioned his name she asked me if I’d known him to any degree and so I just walked in with my recollections.