Here’s a public shout-out for Santa Barbara Film festival chief Roger Durling and all his regional friends and colleagues, hoping that they’re not feeling too freaked out and that their homes are still standing as they stare at those massive Armageddon fire clouds caused by the Jesusita inferno, which has been raging for four days now. Sea valiente, sea fuerte y confianza en dios.

“Fire officials have more than doubled their estimate of how many acres have burned in the Jesusita wildfire [that’s been] raging along mountain slopes above Santa Barbara,” says an AP story that was filed around midnight.

“The Department of Forestry and Fire Protection says new aircraft tracking shows the fire has burned 8,600 acres. Earlier on Friday, officials estimated the 4-day-old blaze had burned 3,500 acres. Fire spokesman Dennis Mathisen says the [previous] smaller estimate was based on firefighters surveying the blaze at night from the ground. The new acreage count was taken by aircraft during the day.”

Here are some relatively recent reports from the Santa Barbara News Press.

Some 13,500 people have either evacuated or been asked to evacuate so far. Some 5400 homes have been “engulfed,” according to a CNN summary. (I don’t think “engulfed” means burned to the ground.) The wind-driven inferno has been described as “uncontrolled.” Well, obviously. 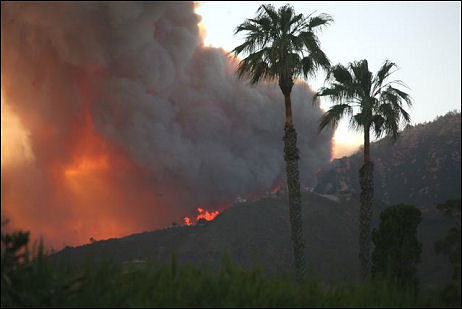 “I had thoughts of Pompeii just now, looking at an abandoned car dealer’s lot, as ash poured down. Everything was deserted, except for people fleeing towards the freeway. Ash pouring, pouring down, hurting the eyes.

“We just snuck back into the evac zones to get more stuff from Tonya’s place. We were safe the whole time, but fire is right over the hill — ALL over the ridge — and this stretch of the city where Tonya lives, where we have sushi and coffee sometimes, is blocked off by cop cars and barriers, utterly black, thousands of homes empty and evacuated. A sky so totally black and ash-covered that you’d think there’s a volcano blowing up. It’s still about 100 degrees here and we’re breathing people’s cars and houses right now.”