I’m presuming, naturally, that several HE regulars were among last night’s Star Trek viewers, and that given the 96% positive Rotten Tomatoes rating some are focusing on aspects of the film they weren’t entirely satisfied with. Because it’s more fun to be contrarian. Not to dump on the film (which I liked), but that’s where the percolation is right now. 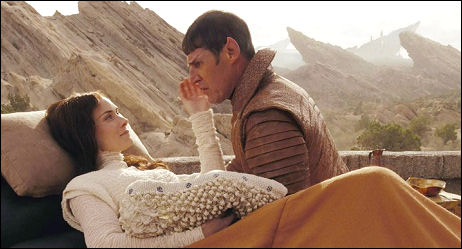 You might want to read Anthony Lane‘s New Yorker review as a starting-off thing. Ignore it, debate it or join the praisers but please add something specific. Comments that just say “I liked it” or “it sucked” will be immediately deleted.

It took in $26 million yesterday for a cume of $33 million if you count Thursday night, which of course you must. Steve Mason says it could hit $75 to $77 million by Sunday night and bank over $200 million by the end of the run.