Industry Friendo: What do you think about Promising Young Woman, Carey Mulligan and her chances? To me her Promising turn is easily the performance of the year. Much more interesting than the others, including Frances McDormand‘s in Nomadland, Pieces of a Woman‘s Vanessa Kirby and Ma Rainey‘s Viola Davis.

HE: Mulligan is one of our greatest actresses, of course. But as I said on 12.24.20, she was much better in Sarah Gavron‘s Suffragette than she is in Emerald Fennell‘s revenge film. (Revenge as in “a dish best served cold.”) Promising Young Woman is a stiletto between the ribs of all the insensitive slobbering assholes out there. It isn’t saying that most of the young horndog clubbers out there are animals — it says ALL of them are. Except for the older guys (Alfred Molina) who can’t shake their middle-aged guilt. But the young ones are impossible. That’s what it’s saying, and it’s a very ballsy film because it doesn’t back off from that viewpoint. I respect that.

Industry Friendo: Are you betting on Frances then?

HE: No, I think the general tide is drifting in Mulligan’s favor now. I’ve been thinking all along it’s going to be McDormand but nobody votes just for expert acting chops or believability…they also vote for the character and who he/she seems to convey or represent in a cultural political sense. There’s obviously something resigned and opaque and oddly obstinate about FM’s Nomadland character, and I don’t think people are in the mood for that.

Mulligan is much more of a stand-out character — a character and an attitude that cuts like a blade. She’s not delivering my idea of a world-class, heart-and-soul performance, but Promising Young Woman has begun to connect like Joker did a year ago, I think. So politically, she’s got the wind at her back. So yeah, she might win.

I can’t for the life of me understand why anyone thinks Ma Rainey‘s Viola Davis performance, which is basically about bluster and sardonicism, is a top contender. It’s between Carey, Pieces of a Woman‘s Vanessa Kirby and Frances. People need to disassociate Kirby from the Shia Labeouf thing — her performance is her performance, and that’s all. 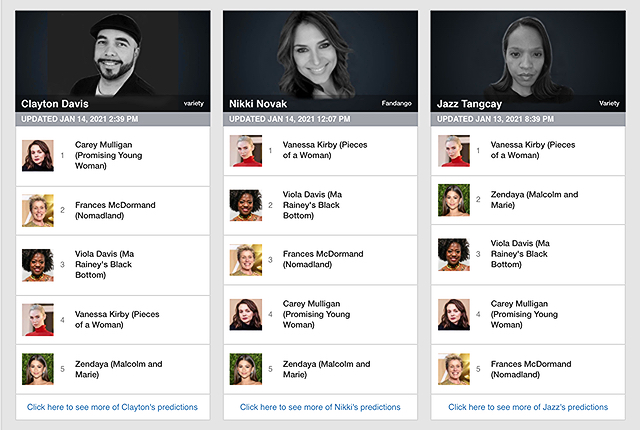 McDormand’s lead with critics awards has been shrinking as Mulligan gains momentum.

Could Mulligan ride this wave to an Oscar win? pic.twitter.com/xNJgmmWuPJ