Josh Friedman‘s 2.1.09 L.A. Times piece about the Hannah Montana concert pic opening this weekend explains something I’d missed until today. In accord with the film being marketed as a “special event,” tickets for the 3-D film will “run as high as $24 at the El Capitan in Hollywood and $20 at the Bridge Cinema de Lux in Los Angeles, and many theaters have scrapped their kiddie and matinee discounts.” 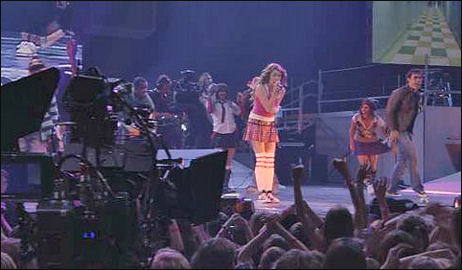 Hannah Montana & Miley Cyrus: Best of Both Worlds Concert Tour is opening today for a one-week run at 683 specially equipped theaters,” Friedman writes, although it might extend for a second week. Why just one week? A marketing guy suggest that the Disney distributors “didn’t know what they had…this could all turn on a dime if this weekend’s grosses are big.” The concert film is only 80 minutes long, which will obviously allow for more showings per day.