4:07 pm: Tens of thousands in Cairo’s Tahrir Square are reportedly furious following Hosni Mubarak‘s refusal to step down in a speech he just gave a few minutes ago. While saying again that he wouldn’t run for president in September, Mubarak said he’ll transfer powers to Vice President Omar Suleiman, but will “continue the oath of his office” and will “continue to shoulder” his responsibilities and work for a peaceful transition of power. 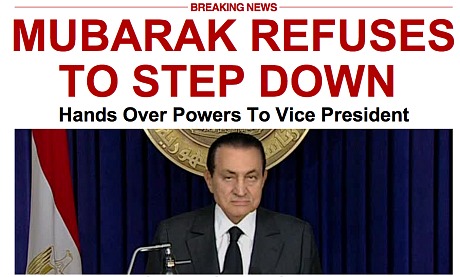 Earlier: Apparently the Egyptian military has stepped in and told Hosni Mubarak, “Okay, enough is enough, pal…that’s it, you’re out.” Mubarak will give his farewell address on TV fairly soon (i.e., a couple of hours from now). What’s happened, apparently, is some kind of “soft coup.” What this means for the various aims of the Egyptian protestors and the eventual implementation of democratic reform is yet to be seen.

A N.Y. Times story is reporting that “the military’s chief of staff, Sami Anan, made an appearance in Tahrir Square, where he pledged to safeguard the people’s demands and their security. Thousands of protesters roared in approval.

“Gen. Hassan al-Roueini, military commander for the Cairo area, also appeared in Tahrir Square and told the demonstrators, ‘All your demands will be met today.’ Some in the crowd held up their hands in V-for-victory signs, shouting ‘the people want the end of the regime’ and ‘Allahu akbar’ or “God is great,” a victory cry used by secular and religious people alike.

“The moves marked a decisive turn in an uprising that has brought hundreds of thousands into the street in the most sweeping revolt in the country’s history. So far, the military has stayed largely on the sidelines, but Thursday’s statement suggested it worried that the country was sliding into chaos. The military called the communiqu√© ‘the first statement of the Supreme Council of the Armed Forces,’ strongly suggestive that it had arranged to take power in Egypt.

“Wael Ghonim, a Google executive and protest organizer whose anti-torture Facebook page helped spark the movement, wrote on his Twitter feed Thursday evening: ‘Mission accomplished. Thanks to all the brave young Egyptians.'”