Last night Deadline‘s Pete Hammond reported that he’s “picking up some interesting trends” in his chats with Academy pallies. “Not just the expected strong support for The King’s Speech (it’s real), but also a surprising amount of backing for The Fighter. It has been the most mentioned movie after The Social Network and could figure significantly by drawing mostly first- and second-place votes.” 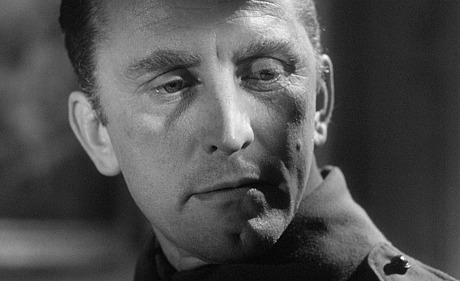 “Because you don’t know the answer to that question, I pity you.”

He also noted that while “some” of his Academy pallies “have already cast their ballots, most have not.” So if there’s any point in making a last-minute plea to any fence-sitters out there, it needs to happen right now. So here’s my last attempt to influence the final vote, however slightly or marginally.

BEST PICTURE: I realize that The King’s Speech crowd is unreachable, intractable and adamantine. All they want to do is vote for the movie they like the best. That’s all they care about. It doesn’t bother them that they’re about to contribute to a Great Historical Embarassment along the lines of the Academy’s giving the Best Picture Oscar to Driving Miss Daisy, Chicago, The Greatest Show on Earth, Dances With Wolves and Around The World in Eighty Days. They’ve apparently got some kind of weird enzyme in their system that blocks any sense of shame or hesitancy about this.

Allow me to paraphrase words spoken to a military tribunal in Paths of Glory by Kirk Douglas‘s Colonel Dax: “There are times when I’m ashamed to be a member of the industry-supported, Oscar-following community, and this is one such occasion. Ladies and gentlemen of the Academy, proclaiming to the world that you sincerely believe that The King’s Speech is the Best Picture of 2010 reveals a mediocre sensibility. It will be seen in the eyes of history as a very pedestrian call, and will haunt each of you, due respect, to the day you die. I can’t believe that the wisest and noblest impulse among movie lovers, which is the ability to recognize the difference between a very good and highly likable film vs. one of exceptional craft and dimension and incandescence, can be completely dead here. Therefore, I humbly beg you to come to your senses, forget about what you ‘like’ and think of the contempt and derision that may be your legacy for decades and centuries to come.”

BEST DIRECTOR: You know it has to be The Social Network‘s David Fincher — you know it does. Forget the DGA call. This is your deal. Good effin’ God…please.

BEST ACTRESS: If you’re really going to give the Best Picture Oscar to The King’s Speech, you just can’t go “full fart” by giving the Best Actress Oscar to Annette Bening, as good as she is in The Kids Are All Right. You’d be creating a rep for the Oscar telecast as the Baby Boomer Movie Awards, which will obviously hasten its irrelevance, and the Movie Godz would completely freak out. You have to stay with Black Swan ‘s Natalie Portman and show respect to the millions of women who’ve been flocking to this film and who will push the total gross to over $100 million.

BEST SUPPORTING ACTOR: You’ve got to stick with The Fighter‘s Christian Bale. Forget about any last-minute shift to The King’s Speech‘s Geoffrey Rush, as wonderful as his voice sounds when it’s been well-amplified with sub-woofer speakers.

BEST SUPPORTING ACTRESS: Whatever feels right. My favorite performance was given by Amy Adams in The Fighter because it was my favorite character, but the actress I most admire at this stage of the game and therefore must support is the great Melissa Leo. In the words of David Poland, “If you were going to vote for Melissa Leo and are considering not voting for her because of [her self-financed] ads, you are an ass.”

BEST ORIGINAL SCREENPLAY: If you give the Oscar to The King’s Speech‘s David Seidler, then okay, whatever…it took him years to get there and he did a very good job. And he may have cinched it when he answered that question I asked him during the Santa Barbara Film Festival “It Stars With The Script” panel. But it ought to go, I feel, to Inception‘s Christopher Nolan for the extraordinary vision and originaltiy.

BEST MAKEUP: You can’t give it to The Wolfman…no! And you can’t give an Oscar to Barney’s Version for putting wigs on Paul Giamatti. Default winner: The Way Back.