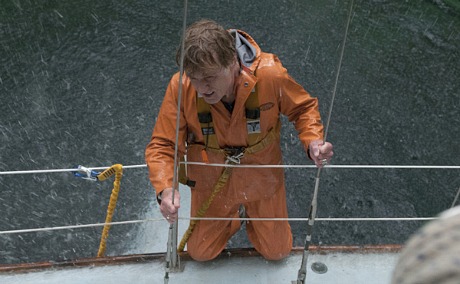 It’s been explained over and over that Gravity and All Is Lost are essentially the same film. A solo traveller without the usual resources trying to survive against oppressive odds. Gravity is a masterful achievement as far as it goes — an audacious technical feat and a first-rate thrill ride. But All Is Lost is just as audacious is its own way, and is much deeper, more “personal” and far more poignant than Gravity. The answer is that most people don’t want a one-character movie about an old guy on a damaged sailing craft, etc. They want a younger woman tumbling head over heels and their CG 3D thrills and the visual landscape of space and so on. No argument, no dithering — it’s what they want.

As Brevet points out, All Is Lost is (a) losing theatres and (b) is set to debut VOD on 1.21.14 followed by the DVD and Bluray preem on 2.11.14. The problem is that All Is Lost demands to be seen on a big screen in a packed theatre with everyone giving it their full attention. Home viewing means the usual kitchen and bathroom breaks plus texting at the same time plus petting your dog and cat plus impulsive bouts of affection with your girlfriend plus doing the wash and answering the door when the Fed Ex guy arrives or dealing with that creepy beardo upstairs asking “is that your cat?”