It’s very nice to be a friend of Warner Bros. again after being placed on their shit list in late ’07. But I’m not really “in” with them in an In Like Flint sense. In their eyes I’m sort of in a halfway house — on a kind of probationary status — in which I get to see their films but fairly late in the game. Which is basically what’s now happening with Chris Nolan‘s Inception (Warner Bros., 7.16). 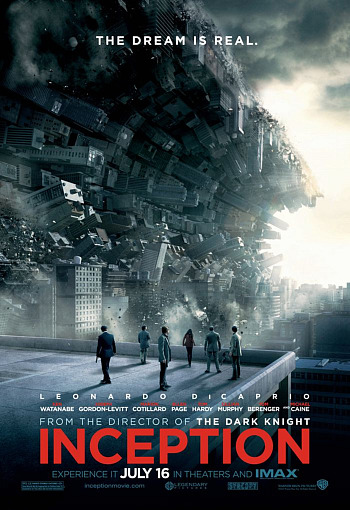 Most of your civilized upscale journalists (i.e., the people in the know & in the glow) have already seen Inception. The junket crowd caught it prior to last weekend. And then the night before last (i.e., Friday, 7.3) the L.A. Cool Kidz attended a special L.A. Cool Kidz screening with a notification that they could review Inception as of Monday at 3 pm, Pacific. So that’s when the first wave of reviews will hit the beach. Read, highlight, copy, paste.

When does the New York contingent get to weigh in? Well, a bit later. Some New York junket participants saw it here before the late June junket, but the first New York Cool Kidz screening won’t happen until 7.6 at 2 pm, or a full day after the first reviews from the Los Angeles Cool Kidz will break. So the early-bird New Yorkers are behind the eight ball going in.

As things now stand, Hollywood Elsewhere will have to wait for a full week after that. The Big Reveal will be at an all-media screening on Tuesday, July 13th, or three days before Inception opens. That will be a full day after the regional screenings happen on 7.12. So basically I’m at the tail end of the line. I’m not kvetching — I’m just saying how it is.

What’s the word? Inception is a very well done film that you’ll have to stay focused on like a laser beam and keep up with like an A student in advanced Algebra class on Ritalin, or you’re dead. 150 minutes, edge of your seat…focus, focus, focus. No bathroom or popcorn breaks. If you’re a Nolan head or a non-Nolan head, this is a movie you’ll need to figure out like a whiz kid messing with a Rubik’s Cube. The basic drill is you’ll need to see it twice. The first time to get wet and figure out some of the card play, and the second time to go in with an advanced knowledge base and then really get into it.