According to “The Fattening of America” author Eric Finkelstein, the ballooning of America is less of a health problem than it is a “lifestyle choice.” Obesity, he asserts, “is a natural extension of an advancing economy. As you become a First World economy and you get all these labor-saving devices and low-cost, easily accessible foods, people are going to eat more and exercise less.” Are you hearing this guy? He’s enabling — he’s selling the idea that obesity is a so-whatter. 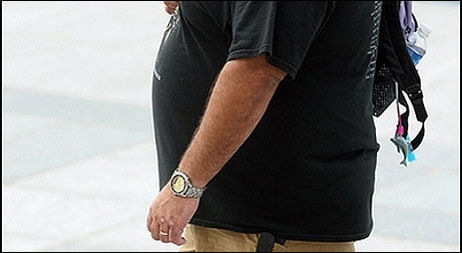 Finkelstein’s book explains the prevalance of childen and adults with the bodies of sea lions has more than doubled in the U.S. between 1960 and 2004, rising from 13 % to around 33 %. That’s averaging in the blue areas where people actually exercise and try to eat healthily, of course. Visit any airport in any middle-American region and it’s obvious that at least 50% (if not more) are Jabba-sized.

January 12, 2008by Jeffrey Wells57 Comments
« Previous post
The Hottie, the Nottie & Sundance
Next post »
Jones and things that sting