The Hottie, the Nottie & Sundance

The ickiest and most ignoble promotion riding the coattails of Sundance ’08? How about The Hottie and the Nottie (Regent, 2.8), a seemingly vulgar relationship farce (to go by the trailer) starring Paris Hilton, Joel Moore and Christine Lakin? Moore has always been hot for Hilton, makes a pitch, gets the come-hither (total fantasy), has to deal with Hilton’s witch-ugly best friend (Lakin covered with grotesque “ugly” makeup), etc. Obviously a pathetic Troma-type deal. 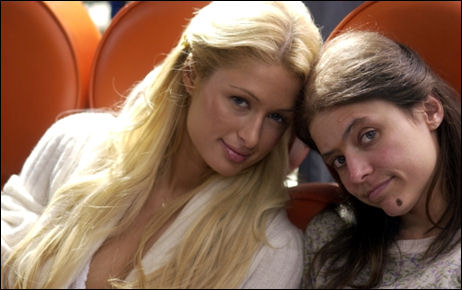 Hilton will presumably attend the two Hottie and the Nottie parties on Sunday, 1.20 — a pre-party and an after-party (after what? is there a screening?) at the Bon Appetit Supper Club, 540 Main St., Park City. They’re being thrown by Livestyle Entertainment‘s David Manning.
From the mid ’80s to the mid ’90s, there was only one Sundance Film Festival. But over the last ten years (certainly since the turn of the century) it has split into two entities — the real-deal festival centered around screenings at the Eccles, Racket Club, Library, Prospector Square, Holiday Village and the Yarrow and the various dinners and parties celebrating various real-deal filmmakers, and the piggyback faux-festival that (a) happens on Main Street, (b) has nothing to do with movie-worship, (c) is primarily about companies looking to ride the Sundance hoopla in order to promote their brands and wares, and (d) is economically propelled by thousands of under-35 party animals who come to Park City to drink and score and go “hoo-hoo!” until 3 ayem for nine or ten days straight.
If anyone has heard of anything more odious than The Hottie and the Nottie as the flagship for the faux-festival, please inform and I’ll take a look. 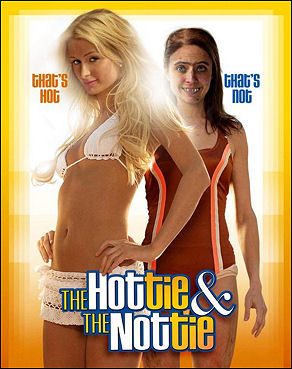