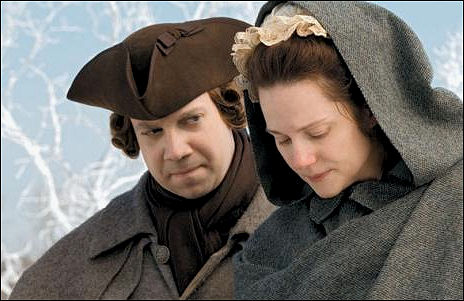 It’s the kind of thing that feature films have obviously given up on. Unless, you know, Roland Emmerich is the director and every now and then a guy’s head gets blown off by a cannonball or a church full of American Christians is burned to the ground by British troops and we can hear the screaming and the agony.
A leader in the war for independence, principally in his role as diplomat and negotiator par excellence, Adams as the second president of the United States (1797-1801). He also served as America’s first Vice President (1789-1797). He was defeated for re-election by Thomas Jefferson.
I love that line in Jill Lepore‘s New Yorker piece about Paul Giamatti, who plays Adams, “scowling beneath fifty-seven different wigs.” And her observation, which is accurate, that the film, based on David McCullough‘s biography, “is animated as much by Adams’s many private resentments as by the birth of the United States. It is history, with a grudge.” 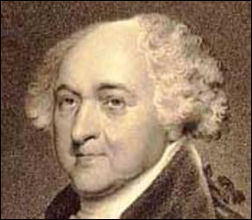 For me, it’s 18th Century history starring (I’m sorry) Miles from Sideways, but in a much more fierce and passionate guise. When Giamatti gets indignant, there’s that petty sound he makes with his voice, and I’m sorry but it’s all Miles. I just see him losing it at that winery and picking up that clay pot and sloshing down the “pours.” And I wish the producers had decided to give Giamatti a prosthetic nose like the one belonging to Real McCoy. John Adams (pictured above) looked English, and Giamatti simply doesn’t. And they could’ve fixed or modified this.
If you’re in the Pacific time zone, there’s plenty of time to catch this thing. It starts at 8 pm and last three hours. The subsequent episodes will be one hour each.