Jurassic World Is Basically Satire, Aimed At Itself And You…Yes, You, The Chubby Guy In The Fifth Row Inhaling An Extra-Large Tub of Popcorn

And yet, I said to myself, Jurassic World is a piece of two-pronged satire — self-directed and aimed at the audience. I’m serious. It’s delivering pointed commentary about the prison cell that summer-tentpole filmmakers have locked themselves into by having to deliver better, more awesome CG whamoramas with each new film, each time paying less and less attention to the basics of dramatic engagement. It’s also speaking directly to the mass audience about their complicity in this degradation.

Bryce Dallas Howard, the pseudo-authority figure at the Jurassic World theme park off the coast of Costa Rica, plainly states at the beginning that the tourists are bored with standard-issue dinos and that they want more thrills and “bigger teeth,” which has led to the creation of a super-hybrid dino called Indominus Rex plus an aquatic super-sized, carniverous Mosasaurus. Jurassic World = Indominus Rex…get it?

I’m not calling Jurassic World an art film, but it is standing outside of itself and saying “look at what we are and what we’ve become, but more particularly look at yourselves…yes, flabby-brain, you…you and your wife or girlfriend and your ADD-afflicted kids…all with your gallon-sized tubs of popcorn and looking for faster, bigger, more awesome. We’re making movies like this because of you, which is why we made sure that one of the first guys to be eaten in Jurassic World is a fat-ass, which of course is a metaphor. 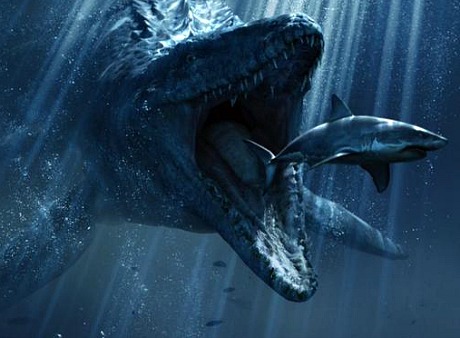 “Are you guys getting the under-text here? Do you understand what we’re saying? We prefer movies like the original Jurassic Park and…well, you know, scary thrill flicks in the semi-classic mode (i.e., Joe Dante‘s The Howling or John Carpenter or Howard Hawks version of The Thing) but we’re forced to make movies like this because you guys have no breeding or class or cultivation to speak of and you’ll only show up for the next biggah wowsah yowsah erection movie. Hell, half of you wouldn’t see Love & Mercy with a gun at your heads. You’re trash and we hate you, but we need you to buy tickets.”

Variety‘s Scott Foundas agrees: “If the first Jurassic Park served as a game-changing harbinger of the CGI-era tentpole movie (as well as the movie-as-theme-park-attraction-as-movie), Jurassic World can be seen as a self-aware commentary on the difficulties of sustaining a popular franchise in an age when spectacular ‘event’ movies are the rule more than the exception.”

I really did admire Pratt for holding on to that manned-up, straight-faced expression through thick and thin. Grim it up, do the job, ride the bike through the jungle, plant a smoochy wet one on Howard right in the middle of everything with the kids watching, collect the check…but take it easy on the cheeseburgers and fries, homey. You’re going to turn into Aldo Ray in The Green Berets before you know it. Yeah, I know…”Aldo who?”

In my 5.27 review of San Andreas I said that it “makes Irwin Allen‘s The Towering Inferno look like Elia Kazan‘s On The Waterfront.” Well, Jurassic World makes Steven Spielberg‘s original Jurassic Park (’93) look like a cross between Eugene O’Neil‘s A Moon For The Misbegotten and Robert Stevenson‘s Darby O’Gill and the Little People.