Support on Patreon Follow @wellshwood
114 Comments
What If The Bond Franchise Suddenly Ceased To Exist?

What would we lose as a community or a culture if a final, irrevocable pledge was made by producers Michael Wilson and Barbara Broccoli to never make another 007 film again, to just walk away and leave it forever? Answer: Nothing.

SoCal readers of Hollywood Elsewhere are hereby urged to snag a ticket to the 6.17 Los Angeles Film Festival screening of Ondi Timoner‘s Brand: A Second Coming. “I can’t overstate how jolting and invigorating this doc plays, especially during the second viewing and particularly when it hits the 40-minute mark, which is when the story of Russell Brand’s social-political awakening kicks in,” I wrote on 3.14. “It’s a brilliant, go-for-it thing that not only portrays and engages with a brilliant artist-provocateur but matches his temperament and picks up the flag. Superb photography by Timoner (especially loved the occasional punctuation of grainy 8mm) and HE’s own Svetlana Cvetko. The doc constantly pops, riffs and punches over its nearly two-hour running time. Magnificent graphics and editing, and a perfect ending.” 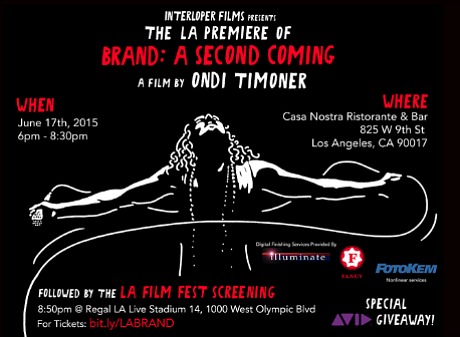 Word around the campfire is that Thomas McCarthy‘s Spotlight, a drama about the uncovering of Catholic Church sex abuses by the Boston Globe‘s “Spotlight” team in 2001 and ’02, has turned out well. Earlier today Open Road announced a November 6th opening date with expansions to follow — an obvious indication that they expect award-season action. I’ve heard that Open Road honcho Tom Ortenberg has been telling pallies that Spotlight has the goods and then some. I was actually hoping it might screen at the Cannes Film Festival but that wasn’t to be. (I know for a fact that it test-screened in Pasadena’s Old Town on 4.29.15.) I wouldn’t be surprised if Spotlight turns up at the Venice or Telluride or Toronto Film Festivals, or maybe all three. Directed and co-written by McCarthy (with Josh Singer), pic costars Mark Ruffalo, Michael Keaton, Rachel McAdams, John Slattery, Liev Schrieber, Brian D’Arcy James, Stanley Tucci and Billy Crudup. 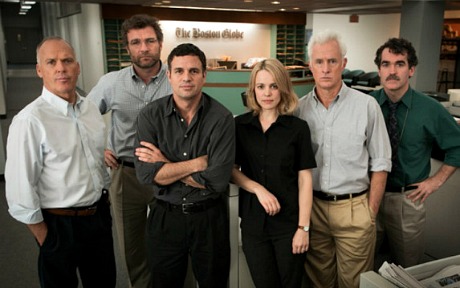 Pretty much all the difficulty in Jurassic World boils down to Indominus Rex getting loose and going on a killing spree — tourists, other dinosaurs, anything that moves. Around the halfway mark a deranged corporate guy (Vincent D’Onofrio) brings in a team of heavily armed SWAT commandos — guys with all kinds of automatic weapons, heavy artillery, helicopters, etc. D’Onofrio says he wants to use Chris Pratt‘s smart raptors to fight Middle-Eastern terrorists, but he doesn’t have any strategic plans for the Rex. The only shot is to kill the fucker, and yet somehow D’Onofrio’s guys are unable to, even from a chopper above. And what about the regular Jurassic World guys? Are you telling me they aren’t armed just in case? Indominus Rex is big and scary and ferocious, but he’s made of flesh, blood and bone. He could definitely be killed with a few shots to the head or the heart. And yet pretty much the whole film hangs on the inability of anyone to manage this. Ludicrous. 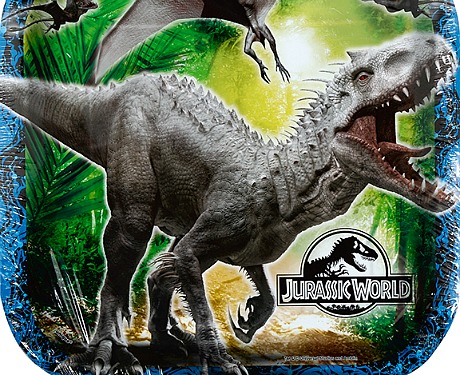 Michael Ritchie‘s Prime Cut (’72) is a moderately interesting, high-grade exploitation film. Women treated as cattle, meat for sale, property. More than a bit offensive by the cultural standards of ’72, grotesque by today’s standards. But this restaurant scene is nice. Apart, that is, from the absurd notion that Sissy Spacek, a young Midwestern prostitute who’s been adopted by Chicago gangster Lee Marvin, would wear a transparent dress without a bra to an upscale restaurant. But the quietness of this scene is nice. There’s a gentle, kindly vibe between the paternal Marvin and the socially uncertain Spacek. And it offers very little dialogue, and the dialogue you do hear is peripheral. Scenes with scant or no dialogue are relatively rare these days. Apart from The Artist, what 21st Century films have used silence in a scene that lasts…oh, 45 seconds or longer?

June 10, 2015 12:56 pmby Jeffrey Wells
39 Comments
Jurassic World Is Basically Satire, Aimed At Itself And You…Yes, You, The Chubby Guy In The Fifth Row Inhaling An Extra-Large Tub of Popcorn