Not Just The Performance, But The Role

Patricia Arquette‘s grounded performance as Ellar Coltrane‘s stressed-out mom in Boyhood has been attracting some awards talk. Obviously the smart play would be to go for Best Supporting Actress as (a) the film is largely an ensemble piece and (b) Arquette’s Olivia is obviously not the lead. Two of P.A.’s biggest supporters right now are Awards Daily‘s Sasha Stone and Indiewire‘s Anne Thompson. It’s obvious they have personal motives above and beyond their respect for Arquette’s acting. They’re both hard-working moms and so they naturally relate to Olivia’s burden. Plus both their daughters are either approaching or just past college age and so they know something about the heartbreak of letting your child go in order to find his or her own way, which is what Olivia expresses at the end of the film. There’s nothing wrong with feeling this identification or expressing how it’s touched you.

I’m mentioning this because I too feel an identification, and that’s with young Ellar as he suffers under not just one but two boozy, bullying stepdads whom Arquette marries over the course of Boyhood. Dickhead husband #1 is Bill (Marco Peralla), a silver-haired political conservative and a major-league alcoholic. Dickhead husband #2 is Jim (Brad Hawkins), an Iraq/Afghanistan War veteran with another alcohol problem and a kind of brawny, obnoxious, don’t-fuck-with-me approach to parenting.

Arquette eventually divorces them both, but she’s the one who has brought this shit into her children’s lives. I therefore came to dislike Olivia (or at least not respect her very much) for being so selfish as to not give a little more thought to the kind of guys she was installing as a stepdad. It’s one thing to make a mistake with the wrong guy once, but twice? By marrying the same kind of asshole? And making the kids pay for it more than anyone else?

This is why I don’t have much affection for Olivia as I suffered under an alcoholic dad myself and I know what that’s about. Exposing two kids to that kind of abuse really sucks.

I’m therefore left with admiration for her chops (Arquette has always been good in every role she’s played, particularly during her ’90s heyday with the exception of her mystifyingly terrible performance as the world’s least believable doctor in John Boorman‘s Beyond Rangoon) while feeling very little love for her character. The reason Stone and Thompson are on her team is because they relate to her life and her struggle and her Act Three station in life, and the reason I’m not as much on her team is because I relate to poor abused Ellar. What do you want me to do, cut Arquette a break by saying that I don’t relate to Ellar and that I think it’s totally fine for Olivia to bring what she does into Ellar and his sister’s life?

I’m sorry but we all vote for who the character actually is as much as how good the performance is and how well the character has been written and all that. 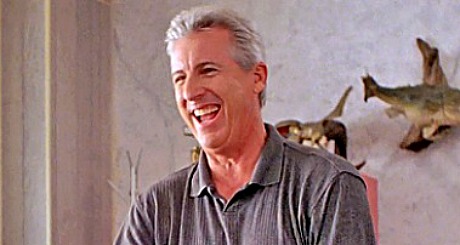 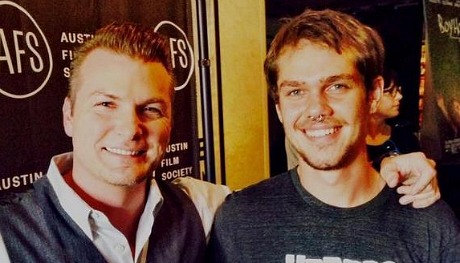 Boyhood‘s asshole stepdad #2 — Brad Hawkins‘ “Jim” (posing outside of the realm of the film with Ellar Coltrane, probably at some premiere).

Here’s a just-posted Sasha piece about Arquette’s performance and her presumed award-season heat.

“When I interviewed Arquette (to be posted soon) she talked about spending time considering who her character would be — different from who she herself was — at a given point in time, even considering whether she would be wearing her hair long or short but also where she’d be emotionally. Since the film jumps forward in time, Arquette had to figure out how to go from young mother, to tired single mother, to rescued-but-then-abused wife, to single mother again, to rescued-then-physically abused wife, to finally, self-possessed and confident woman. Hers is one of the most notable trajectories in the film.”