“King Richard” Is Different, You Bet

Reinaldo Marcus Green and Zach Baylin‘s King Richard has been in the award-season swirl of things since 11.19.21, but the buzz began at the Telluride Film Festival on 9.2.21. And since that debut I’ve been among those who’ve said “this is it!…the big Will Smith moment!…his best performance ever!” and so on.

I wasn’t wrong to jump on this horse, hoopla- and column-subject-wise, but within the last couple of weeks I’ve been giving King Richard a re-think, and I’ve realized that it’s bigger — more — than just an historic Will Smith triumph. It’s a genuinely great film about a family, and that doesn’t mean (let’s be clear about this!) a “family film.” King Richard is way beyond that realm.

This realization didn’t hit me at first. For ever since I turned 15 or 16, I’ve disliked the idea of movies made for or even about families. For decades the notion of films made by the old-time Disney factory — movies that felt a bit sappy and wholesome and formulaic — made me uncomfortable. (Except, that is, for the Jeffrey Katzenberg-led animated films of the ‘90s, which were exciting and joyful.) But otherwise family-friendly films were something to avoid. For me at least. 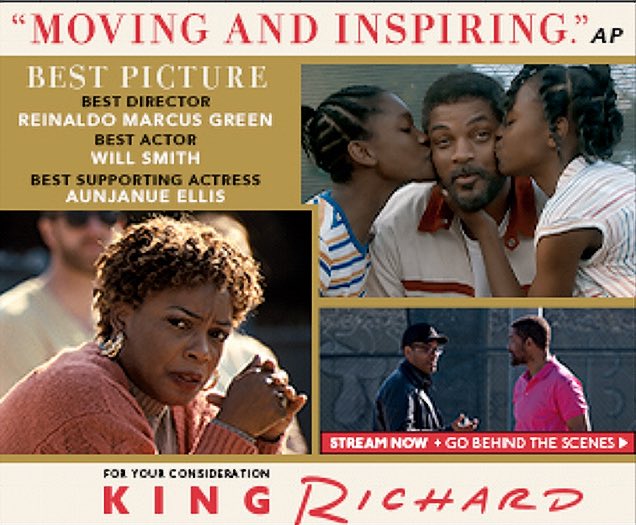 And yet King Richard is arguably the most thrilling (and I mean spiritually) film about the struggles of an ambitious family of the 21st Century. And not in the usual sort of way. It’s not so much about emotions and hugs and serendipity and God’s good fortune, but teamwork, discipline, self-respect and tenacity.

It’s also one of the smartest, most complex and most character-driven sports films ever crafted, and the credit for that goes to Green, who just buckles down, cuts out the superfluous b.s. and tells this hard-fought success story with the drill-sergeant discipline of…well, Richard Williams.

Story-wise, King Richard is clean and crafty and radiates authority, and credit for that aspect can also be shared by screenwriter Zach Baylin. The result is a genre-defying “family film” because it’s not aimed at the usual suspects. It’s aimed, really, at movie lovers and filmmakers who can appreciate what first-rate craft and storytelling are really about

What emerges are three movies in one. It’s a tennis-boot-camp-run-by-a-tough-dad family film. A strong-mom family film, due to the knockout performance by Aunjanue Ellis. And a family saga that plays like one of the greatest, down-in-the-trenches competitive tennis films ever made.

Seriously — name a film about the world of professional tennis — the tennis “racket”, if you will — that feels more real or recognizable or satisfying in a socially attuned, business-is-business way. And name a family-oriented film about strength and waking up early and working hard and thinking right…name another such film that behaves less like the usual product.

The Williams sisters — Venus (Saniyya Sidney) and Serena (Demi Singleton) — are sunny and mellow and well-behaved and glorious on the courts, and their mom, Oracene “Brandy” Price (Ellis) is a model of domestic steel and maternal resolve.

And the film is about rigor and devotion and absolutely no relaxing or kicking back. It’s about “if you fail to plan, you plan to fail.” It’s about “only the strong and gifted who get up early and go to bed at a reasonable hour succeed.”

So it’s not just a Will Smith film (although it is) — it’s a Reinaldo Marcus Green film, an Aunjanue Ellis film, a proud Black family film, a no-slacking-off film, a “show me the money” film, a Saniyya Sidney and Demi Singleton film, a Tony Goldywn and Jon Bernthal and Dylan McDermott film. In short, a team effort about the very tough discipline of filmmaking as well as tennis.

It’s finally a film about faith and belief and the kind of persistence that must not and cannot quit.