What Saving Private Ryan did for D-Day in terms of gorey combat realism, David Ayer‘s Fury does for the grueling experience of Brad Pitt‘s tank crew during the last weeks of World War II. Or so says N.Y. Times reporter Michael Cieply, who has apparently seen Fury (Sony, 11.14) and has been given free rein to (a) prepare the cognoscenti for the cinematic carnage to come as well as (b) start the conversation that may — I say “may” — result in Fury becoming a serious Oscar hopeful. 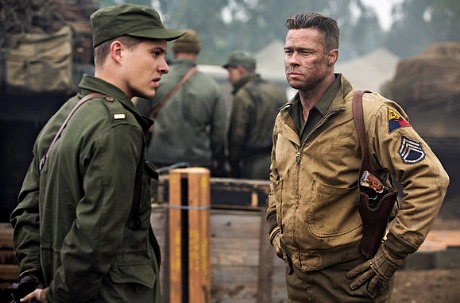 I’m theoretically down with that notion as long as nobody pulls out a baseball bat.

Fury “promises to be one of the most daring studio movies in an awards season that will bring several World War II films,” Cieply states, by delivering “relentlessly authentic” depictions of the combat realm that “the popular culture has rarely seen.”

Cieply emphasizes that Pitt’s “Wardaddy” character uses his knife on enemy soldiers in particularly savage ways. This footage “may shock viewers who have watched American soldiers behave brutally in Vietnam War films at least since Apocalypse Now,” Cieply writes, “but have rarely seen ugliness in the heroes of World War II.” Wardaddy “crosses lines, both legal and moral…not even Lee Marvin’s Sergeant Possum in Samuel Fuller’s The Big Red One, another knife killer, went quite so far.”

Cieply mentions that in actuality, American combat troops on their way to Germany “executed prisoners and killed armed children.” One presumes that something along these lines happens in the film.

For what it’s worth, my late ex-Marine father once told me that guys in his outfit shot Japanese prisoners every so often, partly because it felt good and partly because they couldn’t be bothered with all the procedural prisoner-of-war rigmarole. 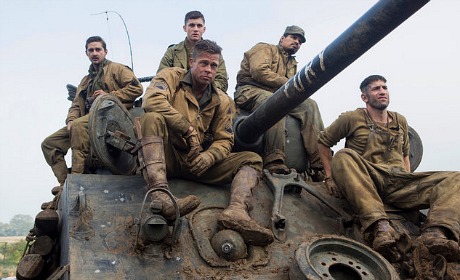