Seeing Hellboy II the other night reminded me that the films of Guillermo del Toro are as good as it gets in the fantastical horror realm. They’ve got first-class effects, wit, invention, soul, visual economy, emotional gravitas. The monsters are beautifully particular, the performances have warmth and authority, and the camerawork and the cutting are grabby and fast but this side of hyper. 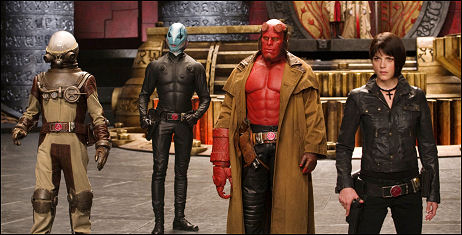 The problem is this, and it’s not so much Guillermo’s fault as the action-fantasy genre: I’m sick to death of watching stuff getting wrecked and smashed and shattered and blown into a million pieces. I hate the rigid big-studio FX formula that insists upon confrontation and chaos and ruination happening ever 20 or 30 minutes, like some stupid whammy chart. Windows exploded, buildings decimated, cars doing aerial triple-flips, fire hydrants spewing tons of city water, industrial clutter everywhere….what the fuck is this? It’s the same shit in every movie, and it vacuums your soul.
What kind of cretin do you have to be to find this stuff interesting after it’s been repeated 25 or 30 times? How many times can the dumbest moviegoer out there go “whoa!” after seeing a super-hero wallop a slime-covered monster and send it flying several hundred yards into a building or a wall of glass or a concrete bunker, or vice versa? How many times can the hero take a severe beating to the extent that it looks like he’s finished? How many times can a slithering disgusting alien creature try to eat or invade or flatten the heroes? How many times can a moron with a extra-large tub of popcorn in his lap be impressed with loud aural thumpings on the soundtrack?
Guillermo does everything he can to add feeling and humor and humanity to Hellboy II, and he succeeds nicely from time to time, but he’s working within a genre that insists upon showing the same shit over and over, no matter what and no end in sight.
I never thought I’d say this, but in this context I’m a Barry Manilow type of guy. I mean that I loved (okay, liked) the sequence in which Ron Perlman‘s Red and Doug Jones‘ Abe Sapien drunkenly sing along to Manilow’s “Can’t Smile Without You.” And I’m a pretty big fan of Tecate beer. And I liked the bit with Perlman protecting the baby from the madness and other stuff along these lines. 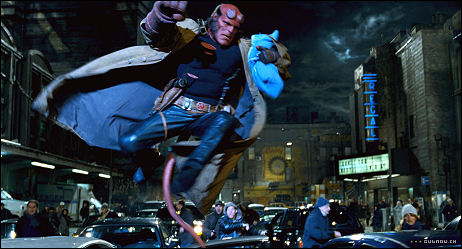 I’d much rather see a televised dramedy series starring Red, Abe, Selma Blair‘s Liz Sherman, Jeffrey Tambor‘s Tom Manning and all the rest of the Del Toro freaks and eccentrics, and made into a kind of Everybody Loves Raymond type deal with monsters showing up maybe once every five or six episodes. If that. Because I really can’t stand watching shit being blown up any more. How can people can sit through the same demolition derby in film after film, over and over, year after year? It’s insane.
Guillermo knows that I’m much more of a Chronos/Devil’s Backbone/Pan’s Labyrinth/The Orphanage type of guy and that I just can’t roll over for the big-studio stuff. It’s always been a big problem for me.
One technical beef: when the giant land-squid monster picks up a Mercedes Benz and squeezes it to death, we should see gallons of gasoline gushing out. Are we supposed to think that the car had no gas in it? I didn’t believe it. Maybe Guillermo can fix this effect for the DVD version.