Late last night an HE reader named Billy wrote that Due Date “played okay” at last night’s “packed New York premiere. Not gut splitting. Okay.” That was also how it felt during yesterday afternoon’s Manhattan press screening, but this, to me, is a secondary consideration. I responded this morning as follows: 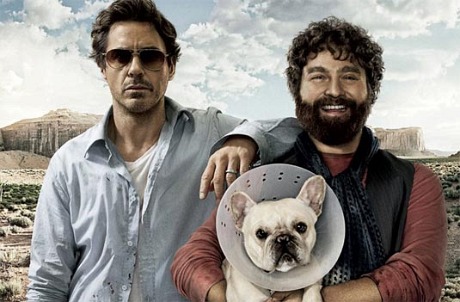 You’re measuring Due Date, in other words, by the standard of “how big and rollicking is the laughter?” And by that standard, you’re not wrong. The big haw-haws don’t come every other minute, but there’s a lot of “no-laugh funny” stuff in it, and to me that’s an excellent thing. The best comedies get you with humor that’s concurrently broad and unmissable and interior and smirk-worthy.

I’m measuring Due Date by the standard of novelty and relative bravery. It’s dealing comic cards from a fairly dark and calloused place. It’s genuinely funny in a way that is obviously not original in terms of the basic template (i.e., strange bedfellows on a road trip, Planes, Trains & Automobiles) but is, I feel, significantly different from other mainstream comedies by way of being meaner. This is not a comedy that believes in man-hugging. At best it believes that others can be tolerated if you work on your attitude and turn the other cheek.

Downey is playing a chilly, highly intelligent dick — a snide, superior-minded, hostile-attitude type who knows how to be a mensch but doesn’t care to let that side of himself out because…well, fuck ’em. And he really commits to that without winking at the audience, and he uncovers aspects and vulnerabilities within this guy that are definitely darker and more intriguing than the kind of thing you usually get in a big-studio comedy like this.

Honestly? Downey’s character is a little bit like me during my darker, more defensive moments in the early to mid ’90s when I was recently divorced and struggling in a highly competitive Hollywood freelance realm and routinely getting blown off and lied to and told “no” and “sorry, pal” and “eff you” and dealing with all kinds of political pressure from film-industry bigwigs as well as my own editors and dealing with a vodka-and-lemonade problem on top of all that. I had moments of defensiveness and hostility, no question, and I’m very, very happy not to be succumbing to that current these days. Hollywood Elsewhere is a great gig and a great forum — I’m stressed but very happy these days — but I remember, I remember…

In short, it ain’t the “hah-hah” in Due Date but the “oh, wow…really? A mainstream comedy is going there? Brave.” It works because Downey is obviously counterbalanced by Galifianakis, and because Galifianakis is showing a bit more subtlety and a few more colors than he has in previous films, certain more so than in The Hangover.

Incidentally: Here’s a negative review by Marshall Fine, who’s also judging Due Date by asking “how funny is it?” I say again, quoting the legendary Michael O’Donoghue, that simply “making people laugh is the lowest form of humor.”