It’s strange that no one has commented so far about the obvious echo factors regarding Michael Bay‘s Platinum Pictures being in negotiations with Paramount Pictures to do a Rosemary’s Baby remake. For humor’s sake, at least. 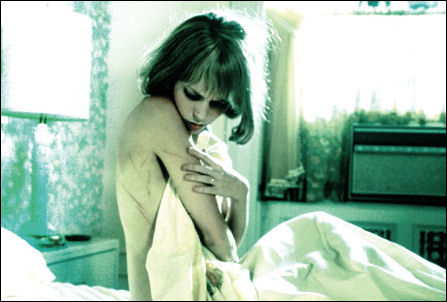 Echo #1 is that we’ve got a trade story here about a man who’s been half- jokingly referred to by film writers, editors and film fans for years as a satanic figure, and now this guy is looking to make a movie about the birth of Satan’s spawn. You don’t think that’s funny?
Nobody actually believes that Bay is literally a man-devil with horns and hooves, but he’s certainly been seen for at least a decade as someone who’s come to represent demonic forces in the film industry, a soul-less heebie-jeebie craftsman who has done more than anyone else to bring about the death of genuine spirit and heart and coherency in narrative cinema, a sworn enemy of the beliefs and ghosts of Ernst Lubitsch, Robert Bresson, John Ford and Stanley Kubrick (among thousands of others) and the mortal foe in today’s world of alive-and-well guys like Florian von Heckel Donnersmarck.
Echo #2 is all flaky ephemera and silly supposition, but throw it all together you’ve got the kind of thing that would make you gulp if you heard it in The Omen. I’m not saying it’s remotely imaginable much less anything a sane person would consider, but let’s take the Michael Bay-is-the-devil idea and advance it a notch and suppose, just for fun, that Bay is actually the son of Satan. 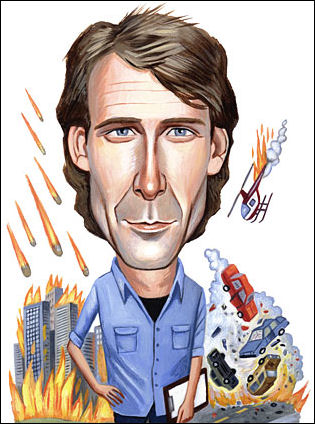 He was born on 2.14.65, which was when Ira Levin was writing and researching his Rosemary’s Baby novel, which was published about two and a half years later, in mid 1967. So where did the idea for Levin’s book come from? Perhaps there were demonic vibrations in the air in the aftermath of Bay’s first wail and Levin, being a typically sensitive writer who perhaps knew a little something about the occult, picked up on this somehow? Maybe he knew someone who told him, “Something has happened, I know not what.”
Clearly the editors of Time magazine felt something in the air also because in April 1966, when Bay was only 14 months old, they published their famous “Is God Dead?” essay with that magazine cover that people still remember today. Roman Polanski, director of the original Rosemary’s Baby (’68), used this Time cover for an insert shot in his film.
I’m not saying any of this makes any sense, but once you accept the fictional notion of Bay’s demonic parentage it all starts to fall into place with an oddly creepy logic. Bay’s birth, Levin begins “Rosemary’s Baby,” Time wonders if God has died, the book is published, the movie is shot and released….all in fairly fast succession. 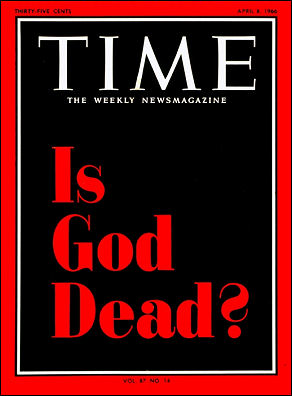 If you go by the logic of The Final Conflict (1981), the rise of Damien Thorn (Sam Neill) is fulfilled when be becomes an adult and begins to control the levers of power in decisive ways. Bay has obviously been doing that for some time in Hollywood circles, but now, the theory goes, he’s finally reached a point where he can tell (or help to tell if someone else directs) the story of his own birth. Yes, a stupid idea but on some primal level there’s a small part of me that believes all of it.
The scary thing is that Bay and his Platinum Pictures team will almost certainly screw this one up — overbaking it, removing all subtlety and sense of dread, making it for the downmarket crowd, etc. Just like they’re certain to do when they get around to remaking Alfred Hitchcock‘s The Birds. 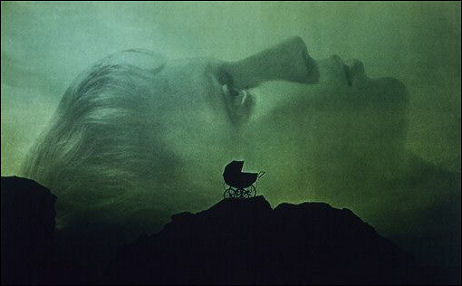