Monsters vs. Aliens has failed with the Rotten Tomatoes creme de la creme, managing only a 58% positive. And it only hit 55% with Metacritic. What

does this signify? Any shot at a Best Animated Feature Oscar nomination is most likely dead, for one thing. It certainly doesn’t mean any less box-office dough. 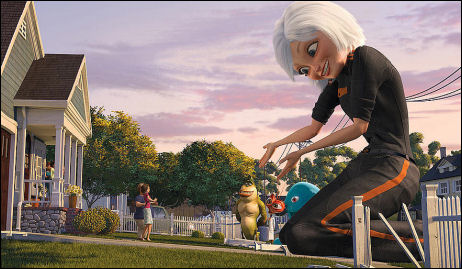 JoeMo says “see it only if you need a retro-monster fix, and in 3-D to offset the no-D script.” Lou-Lou calls it “a clunky and wildly unimaginative” film that “really doesn’t have a clue what to do with the 3D technique.” And yet the Village Voice‘s Robert Wilonsky gave it a full thumbs-up, calling it “a milestone,” and the Oregonian‘s Shawn Levy gave it a near-rave.

“At a recent Saturday morning screening full of youngsters and their adult charges, nary a giggle or delighted gasp could be heard, maybe because references to Dr. Strangelove are lost on the SpongeBob SquarePants set. Either that, or even little ones appreciate a good story. And that’s precisely what’s missing from Monsters vs. Aliens, which is nominally about a bunch of government-sponsored monsters that do battle with an evil alien squid craving world domination.

“That’s plot, not a story. And too often, Monsters vs. Aliens is about things, not characters. One exception is B.O.B., a forgetful blue gelatinous blob that, as voiced by Seth Rogen, not only elicits but earns his laughs. As for the rest of the movie, it will recede into your own B.O.B.-like memory bank, dissolve quickly and disappear forever.”