Musto Chats With Academy Chick: “If You Don’t Schmooze, You Lose”

In a 1.22 Daily Beast article, Michael Musto chats with a (presumably New York-based) Academy voter, and he…sorry, she has a lot of refreshingly candid views to share. One of them is that Alejandro G. Inarritu is not a day at the beach to work with…big deal. Occasional creative tempest will manifest — it goes with the movie business, which has never been a bowl of cherries. Sometimes making a special film takes more effort, and then more on top of that. 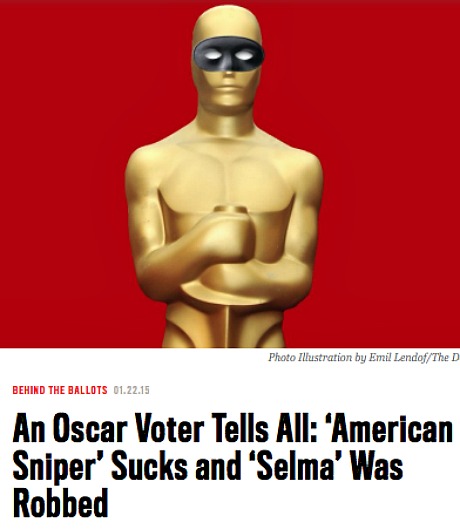 Musto: What do you think will emerge triumphant, Boyhood or Birdman?

Oscar Lady: In my book, Birdman. I don’t get Boyhood as a movie. I don’t understand how it was nominated for screenplay. That was one of the weakest things about it, in my opinion.

Musto: [What about] Supporting Actress?

Oscar Lady: With Keira Knightley [in The Imitation Game], you can throw that one away. Like, “Why? Really?”

Musto: The wife of the gay guy!

Oscar Lady: It was the most boring performance ever, and she’s good, but oh, my lord. Emma Stone is amazing to me, what she keeps coming up with. That‘s a category I’m still head scratching about because I know Meryl Streep was great in Into the Woods, but it’s a little bit of a stunt performance, so I don’t go there, but between Emma and Patricia Arquette [in Boyhood], to be honest, I might go with Emma. If I want to say what performance is living with me and staying with me, it’s Emma. But Patricia has got it locked up.

Musto: Will Best Director be Richard Linklater for Boyhood?

Oscar Lady: Oh, my God. I don’t want to begrudge Linklater this accomplishment, but do I think he’s the best one in the bunch? No.

Musto: So you’ll vote for Inarritu, even though he’s a horrible person?

Oscar Voter: I gotta. It’s a beautiful film. It’s the one that will hold up as a classic. I am so happy Boyhood is doing what it’s doing, but it’s not going to be a movie for the ages.