We all know about the theology of grain monks (i.e., an old film should never be refined beyond what audiences saw when it played the local Bijou), but do they have allies in the TV-transfer realm? I’m asking because it seems a bit curious (and at the same time very cool) that a forthcoming Bluray of the first Twilight Zone season (’59 to ’60) will look better than what Rod Serling was able to see in his private screening room, and far better than what Average Joes saw on their Sylvania or RCA Victor sets. 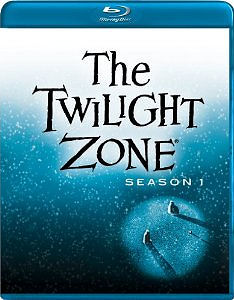 “All new 1080p high-definition transfers have been created from the original camera negatives,” the promotional copy states, “as well as uncompressed PCM audio, remastered from the original magnetic soundtracks,” resulting in 36 episodes (contained on five discs) “presented in pristine high definition for the first time ever!”

If you were a TV-transfer monk, wouldn’t you find this a betrayal of the Twilight Zone‘s original visual aesthetic? Imagine if the Image Entertainment people behind this Twilight Zone Bluray were to stage a coup at Criterion. Imagine the monk horror when they suggest at the first post-coup meeting that Stagecoach could be cleaned up a bit. “No!” the monks would shriek. “Leave those scratches alone! And don’t mess with the grain…please! Show some respect! John Ford wanted this film to look a little bit shitty and dog-eared. And it’s our responsibility to maintain this look into perpetuity!”

The Twilight Zone Bluray will be out on 9.14, and will set you back about $75 bills.