Tatiana wanted to go out for dessert and coffee, and the Bel Air Hotel is one of her favorite haunts. We arrived sometime around 8 pm, and right away it felt wrong. As we walked over the stone bridge there was a huge outdoor dinner party (90 or 100 guests) happening to our left with sparkly white lights, and a live four-piece band playing obnoxious Middle-Eastern or Turkish music. It was awful, and you could just sense that the general clientele weren’t casual X-factor types like myself (I was wearing jeans, my brown leather motorcycle jacket and black-and-white saddle shoes) but Kardashian wannabes with something to prove. 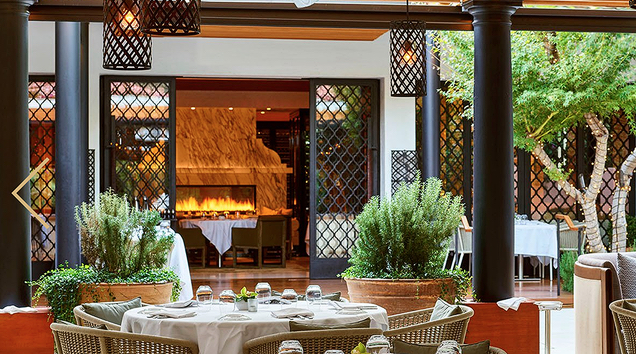 The low-lit bar area has some nice mini-sofa seating, but the Wolfgang Puck dessert menu…I don’t know why I’m complaining given the locale and pretensions, but something in me recoiled when I saw they were charging $18 for a single chocolate chip cookie and a gluten-free snickerdoodle. I was muttering to myself, “I will not order an $18 cookie and this is not my scene…I don’t need to do this. I’ve hung loose in some of the coolest, most casual-vibe cafes and bistros in the world…Paris, Rome, London, Hanoi, Berlin, Belize, Savannah, San Francisco, Cannes, Munich, Prague and lower Manhattan…and the Bel Air Hotel just isn’t cool…everyone is trying too hard and the vibe feels like that of an overpriced hotel in Dubai. And that godawful music from the dinner party wouldn’t quit.

A couple of nights ago I was chatting with a New York journalist friend at Enzo’s Pizzeria in Westwiood, and it was 15 times cooler and more enjoyable because the place has character and personality and nobody gave a shit.