On 6.15 the Ringer podcast (Bill Simmons, Chris Ryan, Sean Fennessey) mentioned a post I did about the old Billy Crystal-Bruno Kirby feud (“When Billy Screwed Bruno,” 8.24.06). The post appeared ten days after Kirby‘s death from lukemia on 8.14.06.

Here’s the original post, which was basically a riff on an article by New York-based journalist Nicholas Stix. I’ve also re-posted a response to Mark Evanier‘s POV Online discussion (dead link) of the Stix article.

Here it is: This article by New York journalist Nicholas Stix (posted on Tuesday and updated today) could have been called “When Billy Shafted Bruno.” It’s not mentioned in the lead graph or the second or third graph, but the heart of the story provides indications and quotes supporting a thesis that Billy Crystal “made” the career of the late Bruno Kirby, who died last week, and then he un-made him. 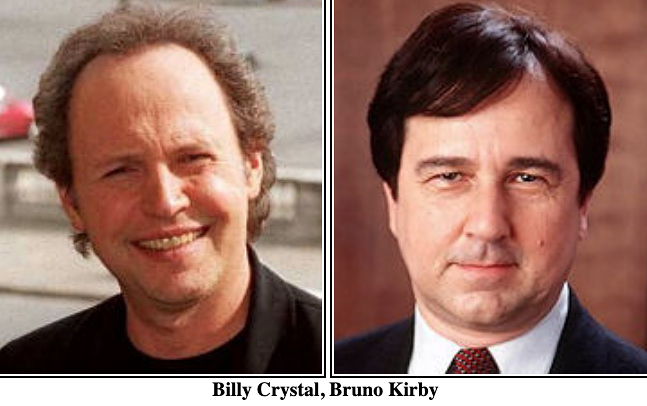 (a) “Kirby, whose first big role was young Clemenza in The Godfather, Part II, was one of the hottest character actors in Hollywood in the late 1980s, through 1991. Kirby’s high point was Rob Reiner‘s When Harry Met Sally (1989), in which Kirby played the male second banana as the sportswriter-best friend of Crystal’s character. Sally would prove to be one of the greatest romantic comedies ever made, and the high point in the career of everyone involved in the production.”

Evanier response: POV Online‘s Mark Evanier is arguing that the Bruno Kirby-Billy Crystal piece by Nicholas Stix that I linked to yesterday (i.e., the one that suggested that Crystal might have been a “career-killing ogre” as far as Kirby was concerned). I don’t know anything about this, but Evanier makes some good arguments. I ‘m disputing one of them, though, and I want to point out something he didn’t mention:

Wloszczyna asked Crystal, “The only thing I could come up with is that when you were making City Slickers II, you and Bruno Kirby had a falling out.” Crystal said, “He wasn’t in City Slickers II.” And Wloszczyna says back, “Yeah, I know, but there was some reason that he didn’t do it. Are you guys still friends?” Crystal answers, “I haven’t spoken to him — I think we are. I haven’t seen him or spoken to him in a long time.”

Stop right there — anyone who says “I think we’re still friends” is dodging and side-stepping. And following this up with “I haven’t seen him or spoken to him in a long time” is, I suspect, a code phrase that means “I haven’t wanted to see or speak with him for a long time because of some shit that went down that I don’t want to get into again.”

Crystal later says to Wloszczyna, “This is a perfect situation. We’re here to talk about the movie, and you’re talking about something personal or whatever it is that happened, I don’t know, eight, nine years ago.” That’s an obvious tipoff that speaking about Kirby is an uncomfortable thing for Crystal. And saying the words “personal or whatever” is another lie — he knows it was personal and he’s saying “or whatever” to water it down.