On 4.29.22 or two and two-thirds months ago, I posted a theory about Greta Gerwig‘s Barbie: “As far as I can determine there’s only one way for Gerwig to go story-wise, and that’s to make a Barbie variation of The Truman Show” — a film about whether it’s better to live a life of plastic, isolated perfection or one that grapples with the unruly ups and downs of the real world.

Four weeks and one day later or on 5.27, World of Reel‘s Jordan Ruimy posted the following description: ‘The film is set in Barbieland, a beautiful, colorful society with Kens and Barbies. Ryan Gosling‘s Ken, said to be a ‘complete doofus’, is obsessed with Margot Robbie‘s Barbie, but loves the real world for all the reasons Barbie hates it (beauty standards, sexism, etc).

“Gerwig’s film eventually becomes a ‘fish out of water comedy’ as Ken and Barbie leave Barbieland for the real world. This motivates the Mattel CEO (Will FerrellJason on Twitter: “Sounds like the meta aspects of Gerwig’s Little Women mixed with Splash and Truman Show [with] Jacques Demy musical influences.”

The alien stuff aside, it has three cool elements — (a) a 1998 flashback scene involving a chimpanzee named Gordy, (b) the re-birth of Fry’s Electronics, the defunct chain store that died from Covid in early ’21, and (c) incessant third-act appearances by an army of “tall boys” or “air dancers” — those shimmering tube-like balloons that used-car lots use to attract attention.

It’s about the owners of a remote horse ranch somewhere in the Southwest, a brother and sister named OJ and Emerald Haywood (Daniel Kaluuya, Keke Palmer) who inherit the ranch when their horse-loving dad (Keith David) is killed by falling objects, apparently dropped by mean-as-fuck aliens.

Bit by bit and more and more, the aliens (whose presence is chiefly signified by saucer-like spaceships and a massive, floating, cloud-like bedsheet thing) begin to intimidate and then terrify OJ and Emerald.

And then OJ and Emerald hire a Fry’s guy (Brandon Perea) to capture video images of the visitors, and then they bring in a documentarian (Michael Wincott‘s “Antlers Holst”, a character cut from the Robert Shaw/”Quint” mold) to capture the alien spacecraft on celluloid. And then the threat element increases. And then it ends.

I saw Nope last night. I developed a thesis this morning that the aliens are a metaphor for white people’s oppression of BIPOCs. This is what Peele does, of course — racial re-fittings of genre tropes. Get Out was a racial spin on The Stepford Wives, and Us was a horror film about doppelgangers but finally about the absolute terror of Ken Kragen‘s “Hands Across America.”

Friendo: “Naah, you’re reading too much into it…Nope is just a UFO thriller.” HE: “But it’s not SAYING anything except ‘boo!’ It has no content…UNLESS you, the viewer, interpret the aliens as metaphors for white oppression. THEN it’s saying something.”

Nope has no structure, no real story, nothing that digs in and pays off. It’s an alien horror film equivalent of a Jasper Johns painting — paint flung and dripped and splattered upon the canvas.

Basic Nope strategy: Start with basic spooky UFO premise and then (a) throw out the rule book, (b) disconnect the logic terminals, (c) throw everything you can think of at the canvas, and (d) see what sticks.

Oh, and by the way? It’s really hard to understand Palmer and especially Kaluuya. As Eddie Murphy might say if he catches Nope, “I don’t what the fuck these guys are sayin’.” Remember Barbara Billingsley’s imitation of black “jive” in 1980’s Airplane? That’s how Palmer talks — half Billingsley, half vocal fry. Remember Murphy’s imitation of James Brown with those guttural scat riffs? That’s how Kaluuya sounds. I was able to understand him maybe 20% of the time, if that.

And they don’t look like brother and sister. Palmer could be Keith David’s daughter, no prob, but no way is Kaluuya his son. Kaluuya’s parents are from Uganda, Palmer’s are from Chicago, David’s are from Harlem/Queens.

No discipline, this fucking film. It’s “imaginative,” if you want to call it that. As slow and talky and stodgy as Cleopatra was, it at least made sense. Which is more than you can say for Nope. So Cleopatra is better.

Say it again — when Gordy appears, the film comes alive. What Gordy has to do with the dumbshit rascal white-oppressor aliens is anyone’s guess.

Steven Yeun costars in Nope, and I couldn’t understand why he was in it. Yes, he has something to do with Gordy (I won’t say) and he wears a red suit and a big white cowboy hat in one scene, but he has NOTHING to do with anything.

I need to re-watch this movie with subtitles some day.

Why the hell is Kaluuya’s character named “OJ,” of all things? That’s a statement of some kind, but what?

If Dore Schary had somehow returned from the dead and become the producer on this film, before filming began he would have invited Peele to lunch and said, “Look, I’m just a Jewish white-guy producer and I don’t know much about African Americans or horse ranches or Fry’s Electronics, but WHAT THE FUCK IS THIS MOVIE ABOUT?? You don’t know, do you? You’re just farting around with spooky alien visitors and trying to cook up something different and trippy, but THIS MOVIE IS BULLSHIT, JORDAN…you know it and I know it.”

No white-ass producer would dare say “bullshit” to Peele, of course, lest he/she be accused of harboring racist attitudes. Which is why Nope turned out this way…a crazy, impressionistic, Jasper Johns-like mess. Peele was apparently given carte blanche control, and this is what happens.

I do approve, however, of Peele bringing Fry’s back to life after it shut down all 31 locations in early ‘21. And I’l always approve of tube men and chimpanzees and stuff like that.

I was studying Palmer closely throughout the film, by the way. I don’t know if it was Palmer who didn’t get along with Bill Murray on the set of Being Mortal, but if it was I can see why. Palmer is buried inside herself and cranked up about everything, and Murray, I’m guessing, thought she was “wrapped too tight for New Orleans” and tried some kind of stilly, loosening-up prank, and she reacted badly, I’m guessing. She not only told him to back off but brought the temple down. Again — I don’t know what happened. I just want to make that clear. But Palmer excited my imagination.

Scott Mantz, one of the happiest, smiling-est and most effusive film buffs and Will Rogers-like operators in the early-screening fraternity, has posted a “no” reaction to Jordan Peele‘s Nope. 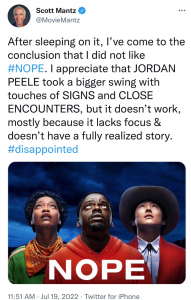 Yesterday Nextbestpicture.com‘s Matt Neglia posted what seems to me like a reasonably savvy and comprehensive guess list of what the hot fall festivals may (and probably will to a large extent) be screening. I’ve heard this and that, and Neglia’s guesses seem pretty spot-on. Boldfaced HE = exceptional interest and unseen (and in some cases Cannes-viewed) approval.

Which projected festival are giving me the slight willies? Wilde’s Don’t Worry Darling, for one. Aronofsky’s The Whale, for another.

Why isn’t Neglia projecting Blonde to play Telluride? Venice and Toronto but not Telluride? Doesn’t figure.

Gigli-Cleopatra Connection
Variety's Owen Gleiberman has posted an essay about the iconic pairing of Ben Affleck and Jennifer Lopez, formerly known as Bennifer or, if you will, "B-Lo", and their recent Las Vegas marriage and especially Gigli, their 2003 box-office bomb that was directed by Martin Brest. Login with Patreon to view this post
July 19, 2022 11:35 amby Jeffrey Wells
3 Comments

Excellent Bill Clinton Story
Told by Bill Maher to Cedric the Entertainer...begins at zero and ends at 2:35. Login with Patreon to view this post
July 19, 2022 10:28 amby Jeffrey Wells

“Normal”, that is, according to social gender standards of ten years ago. Today all bets are off, at least within urban Left and East Coast cultures.

“Live and Die” Lives Again
Anthony and Joe Russo, directors of The Gray Man (Netflix, 7.22), have said that William Friedkin's To Live and Die in L.A., ('85) was an influence in the making of their new film, which struck me as wholly uninvolving and spiritually dead in a Grand Theft Auto sort of way. Login with Patreon to view this post
July 19, 2022 8:30 amby Jeffrey Wells

65 Comments
A Mouse, A Pussy or a Wet Noodle?

This is it, a document that contains smoking-gun proof that Attorney General Merrick Garland is committed first and foremost to political caution and squeamishness when it comes to the absolute necessity of prosecuting the only U.S. President in history to ignite mob rebellion against this country’s Constitutional system of transfer of Presidential power and scheme to overturn a legit election through manipulation and skullduggery. Donald Trump is an animal and a sociopath, and if the U.S. Justice Dept. doesn’t stand up and prosecute his loathsome ass then we are no longer a law-abiding Democracy and the concept of equal justice under law is meaningless — it’s that simple.

Something About Harry Styles
…and the whole jerkwater girly-glam, gender-fluid fashion thing that he’s been statement-izing for a year or two…I guess I was interpreting this as a detour or phase of some kind…an exhibition thing that he wanted to embrace and which would run its course and then on to the next thing…but Styles and others seem to be settling into this anti-straight, anti-traditional-dude, embrace-the-pink-and-the-frilly fashion attitude, and I for one am feeling a bit irked and even (do I dare say this?) angry. I’m sick of his wearing pearl necklaces and transparent black-net sleeves and I don’t care if I sound harumphy. Harry Styles can honestly go fuck himself, and this, to me, has nothing to do with sexuality or gender issues. It has to do with simply being sick of this shit…okay?

The gist is that 12 years ago Gunson believed that Judge Lawrence Rittenbrand (now deceased) was a bad apple who had rashly reneged on a plea deal with Polanski’s attorneys.

Is there anything new in these transcripts? Not if you’ve seen Marina Zenovich’s Roman Polanski: Wanted and Desired (‘08) and her follow up doc, Roman Polanski: Odd Man Out (‘12). The whole Gunson critique and the Rittenbrand history is contained, explained and examined every which way.

The long and the short is that the facts about Rittenbrand’s mishandling of this case have been available for well over a decade and damn near 15 years. It was mainly a matter of watching the first Zenovich doc; the second was dessert.